The global bipolarity persists. However, E7 are not NEFOS (any more). So, we need another narrative.

I propose to borrow some terms from the Astronomy: “galaxy” and “constellation”.

G7 are like a galaxy: huge, consisting of stars, suns, planets, satellites, meteors, comets, dust, gas… turning around a mysterious core (black-hole?) at its orbit and expanding continuously, following a law of gravitation. In case of G7, I call its law “capitalism”, its motivation “material profit”, its doctrine “accumulation by dispossession” and its core the “West”. That is why I propose to name the galaxy “Western”. It is more symbolic and historical rather than geographical although it has some degrees of geography, the Western Europe being the cradle of capitalism. It does not matter whether its member is not situated geographically in Western Europe like Canada, USA, Australia or Japan. Like a galaxy, Western Galaxy has its history. Samir Amin proposed to present the history of capitalism into three periods: Gestation (around 11th-18th centuries: transition from Tributary System to Capitalism, from Chinese, Arabo-Persian, Ottoman Empire to European Mercantilism, European conquest of America, Europe-Africa-America slave trade, slavery in America, genocide of indigenous people of America); Maturity (around 18th-19th centuries: British Industrial Revolution, French Revolution, European conquest of Africa, Asia, Australia and Oceania, genocide of indigenous people of Australia); and Decline (around 19th century up to the present: Monopoly Capitalism, WWI, 1929 Crisis, Nazism, Fascism, WWII, Cold War, Fall of East Block, Globalised-Generalised-Financialised Globalisation known as Neo-Liberal Globalisation, 2008 Crisis…) (Samir Amin, diverse books and articles, such as Eurocentrism, Global History, Trajectory of Historical Capitalism, etc.). It is this system that produced Western European conquest of the world, Genocide of indigenous peoples especially in America and Australia, Transatlantic Europe-Africa-America Slave Trade and Slavery in America, Colonialism of Africa, Asia, Australia and Latin America, WWI, Great Depression of the 1930-s, Nazism, Fascism, WWII, Holocaust, NATO, Wall Street, Bretton Woods, World Bank, IMF, Apartheid, American War in Vietnam, Washington Consensus, American War in Iraq, Davos, Sub-prime-generated Crisis…

As for E7, they resemble more a constellation rather than a galaxy: a group of stars that forms an imaginary profile in the sky (such as Andromeda/the Chained Maiden, Apus/The Bird of Paradise, etc.). While the existence of a galaxy is based on a system, that of a constellation is on an imagination. Moreover, a star alone cannot make a constellation. Only together with others, a star can contribute to the formation of a constellation. These characteristics seem to correspond to E7: a group of countries representing a diversity of political and economic systems, yet sharing at certain level a common history, that is being dominated by Western Galaxy and/or suffering from its behaviour. As for its name, I call it “Bandung”, which has multiple layers of meanings. It was a conference that took place in Bandung, Indonesia, on April 18-24, 1955, gathering 29 newly independent countries of Asia and Africa. It was the first time in history, the biggest international conference outside the UN, representing 2/3 of mankind, organised outside the Western world, outside the two blocs of superpowers. It was a crystallisation of five-century struggle for liberation from colonialism and imperialism, the birthday of the Non-Aligned Movement, the entering of the Third World into the international politic. It gave birth to a common conscience of humanity called “Bandung Spirit” that may be summarised in five keywords: 1) Peaceful coexistence (among nations, diverse political and economic systems, diversity of cultures, religions, living-beings, biodiversity); 2) Liberation (of the world and the people from any kind of domination); 3) Equality (among races, nations, ethnic groups, gender); 4) Solidarity (towards the poor, the colonised, the exploited, the oppressed, the dominated, the handicapped); and 5) Emancipation (based on people’s interests and sustainable perspective). It provoked multiple worldwide manifestations: conferences, cultural festivals, social and solidarity movements, associations/organisations/institutions, business fora, research institutes, study centres, academic periodicals, news magazines… in the spirit of Bandung, including the historical Belgrade Conference of Non-Aligned Nations and Havana Tricontinental Conference… All of these make what I call “Bandung Constellation”. Its contours are moving, but its core is stable, “Bandung Spirit” and its richness inexhaustible, “Imagination”. Its force is not neither economic nor military, but “moral”, as it was declared by its founders in Bandung. Remember, the American war in Vietnam and the Apartheid in South Africa were ended, not because of economic or military forces, but thanks to “global moral forces”.

The E7 countries are explicitly or implicitly a part of Bandung Constellation. Explicitly, China, India and Indonesia were key players of Bandung Conference. Turkey was participant. Russia (Soviet Union at that time) was not invited but Soviet Union supported the conference. Brazil and Mexico were not invited but joined the Non-Alignment Movement as observer. Implicitly, they were all colonies and/or suffering from the domination of Western Galaxy.

So, Western Galaxy and Bandung Constellation, could they grow together peacefully?

As I wrote above: I wish not! How? Are they ready to violent confrontations? What are their power bases, their forces?

An open global total planetary war will not likely happen, because Western Galaxy is not sure that it will win, neither materially nor morally. Moreover, an open world war will run a risk of destroying the whole human civilisation if not the whole planet itself. Despite multipolarity, in case of open global total planetary war, a bipolarisation of forces will happen, at least at the first step (remember the WWII and the Cold War: bipolarisation between Allies and Axis at the first step, then between West Bloc and East Bloc afterward). India and Pakistan, for example, despite their reciprocal distrust, will not likely join or help Western Galaxy to beat China. Similar case of Turkey, Iran, Russia. So, the belligerents will be Western Galaxy against Bandung Constellation. Every side will mobilise its war resources: technology (weapons of mass destruction, aviation, artilleries, submarines, aircraft carriers, TIC, AI, space army, cyber army…), people (regular army, voluntary army, common people, farmers, workers, civil society organisations, media, journalists, public opinion makers…), and raw materials (oil, gas, sun rays, uranium, food, water, money…).

By a simple calculation, in term of material and technology, hard-ware and soft-ware, the match will be unequal. The TIC developed by China, Russia and India, for example, will resist if not beat that of US, UK, France and other countries of Western Galaxy (moreover, there are many Chinese and Indian scientists and engineers in Western Galaxy who may take the side of their countries of origin in case of war). In the field of weapons of mass destruction, for example, the comparative number of nuclear warheads between the nuclear power countries of Western Galaxy (US, UK, France, Israel) and those of Bandung Constellation (China, India, Pakistan, North Korea and Russia) is in favour Bandung Constellation: around 7425 against 7145 (2018 Estimated Global Nuclear Inventories, https://www.armscontrol.org/factsheets/Nuclearweaponswhohaswhat checked 01/05/2020). In term of number of mobilisable people between the two protagonists, the imbalance is obvious. By a simple glance at the demographic statistic (especially number and age) between the two belligerents, the number of mobilisable people of China alone will be more than enough to overtake that of the whole Western Galaxy. Without speaking of India, Indonesia and other Non-Aligned countries of Africa, Asia and Latin America. Without speaking of mentality, morality and spirit of those peoples to be engaged in a patriotic war: ageing, demoralised, spoiled, fragile, fearful of death in Western Galaxy; young, morally forceful, enthusiastic, energetic, resistant, full of sense of duty, of struggle and of sacrifice in Bandung Constellation. As for raw materials needed for war, most of them belong to the countries of Bandung Constellation.

So, an open total global planetary war will not happen. Yet, Western Galaxy does not want to loose its monopoly control over the world. That is why it adopted a concept “endless war”. It is not against a particular state even though it has and will target multiple governments. Endless war is to be conducted against any entity—organization, movement, or government. These endless wars will be limited in several ways. They will be one-sided wars, and the bombs will only fall on the lands of other peoples (Brian Becker, From inter-imperialist war to global class war: Understanding distinct stages of imperialism, online publication of Liberation School, July 20, 2018, https://liberationschool.org/from-inter-imperialist-war-to-global-class-war-understanding-distinct-stages-of-imperialism/ checked 03/05/2020). It uses all war strategies excepting open total global planetary war. Sometimes it will use the classical tac-tic of Roman Empire “divide et impera” (divide and rule), like what it did in the Middle East opposing Saudi Arabia, Yemen, Iran… or in Libya opposing three factions. Some other times it will invade a country, like what it did in Vietnam, Libya, Iraq, Somalia, Afghanistan… Other possibility is supporting separatist movements or even a military coup d’état like what it did successfully in Indonesia and in Chile, or still in process in Hong Kong and Taiwan… So, it is a kind of guerrilla wars led by Western Galaxy at different localities of the world to harass, hassle, disturb and destabilise Bandung Constellation.

All these are possible mainly because Western Galaxy is always united and Bandung Constellation diverse. In this way, the tensions between US and EU, the Brexit, and the discord among EU country members, may be a good signs for Bandung Constellation, for the people of Western Galaxy and for the whole world. It will confirm that Western Galaxy cannot be destroyed from outside. Western Galaxy will be dissolved from inside, by its own contradiction. And it is good for a global future, just like an egg, it is a catastrophe when it is broken from outside, but it gives birth to a new life when it is broken from inside. The new life will be post-capitalism.

And Bandung Constellation? It will continue to live because it is based on a spirit and on an imagination.

Will it be the end of the game?

Whatever the scenarios, peaceful growth or full of turmoil, the rise of Asia, if it continues on the way it grows as it is now, will lead the world to a planetary catastrophe. Because all the rising Asian countries follow exactly the same model of growth of Western Galaxy based on economism, productivism, consumerism, materialism. This model puts on the top of priorities material productivity and profit, transforms nature into commercial commodities, pushes people to be greedy consumers. Rural exodus and urbanisation will continue. People live more and more in urban than rural areas. Cities become centres of concentration of people, buildings, motorised vehicles, goods, gadgets… but also rubbish, garbage, trash, waste, pollution. The urban growth of Beijing, Shanghai, Calcutta, Bombay, Jakarta, Bangkok, Manila… show similar trend: more people, more buildings, more cars, more commercial centres… Consequently, this model threatens the survival of the planet, because it would need natural resources of several planets if the whole world follows the model.

So, what type of society and what model of growth for a global future? Will it be post-capitalist, post-productivist, post-consumerist global society?

It is another story to invent. And the Covid-19-generated global crisis may help us to do it. The pandemic has given us a lesson: it is possible to stop the capitalist-productivist-consumerist machinery. We have a cease-fire now and we have to use it intelligently!*** 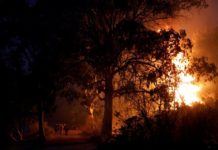 Wildfires roar back to life near Athens as heat fans flames 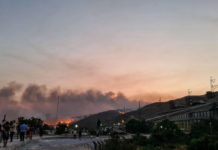 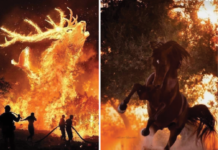 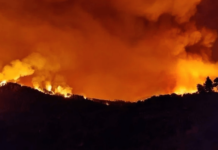 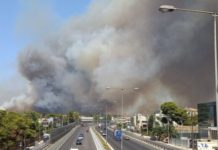 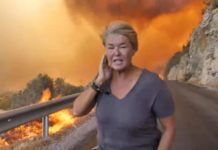