Mystery solved, and the reasons for Hillary Clinton’s inability to become the 45th President of the United States is the result of a sinister trifecta “collusion” between Vladimir Putin, Bernie Sanders, and Donald Trump.

Hillary Clinton first floated the idea of ‘Bernie is to blame’ last week, as detailed in excerpts from her upcoming book “What Happened”…

“That’s what it was like in policy debates with Bernie. We would promise a bold infrastructure investment plan or an ambitious new apprenticeship program for young people, and then Bernie would announce basically the same thing, but bigger. On issue after issue, it was like he kept promising four-minute abs, or even no-minutes abs. Magic abs!”

PS…you seem to ignore the Russia support online for Bernie during the primaries. The guy is hiding something. Not sure I want to know what

All that is missing now is for Hillary Clinton to go on TV and claim 17 intelligence agencies “are confident” Bernie Sanders may have received support from online Russian entities who may have been connected to the Kremlin.

The Hillary Clinton camp has connected all the dots…Putin helped Sanders to the point where he almost defeated Hillary, were it not for super delegates, the DNC, and all of CNN…BUT Sanders (with help from Russia) damaged Hillary enough to allow Russia’s favorite son, Donald Trump, deliver the final blow to Hillary’s bid to become US President.

“The length to which Hillary Clinton and her team will go to shift blame onto others for President Trump’s victory last November is stunning. Adam Parkhomenko, a long time aide to Hillary Clinton, took to Twitter Friday evening to rant about how great his boss’s presidential campaign was in 2016, while taking shots at her primary opponent Bernie Sanders.”

So much fake news. You go to bed at night praying a fake Democrat runs again in 2020. Brady. Amber. Magnitsky. Sanctions.

Below is the tweet where the Bernie-Russia collusion claim was made. 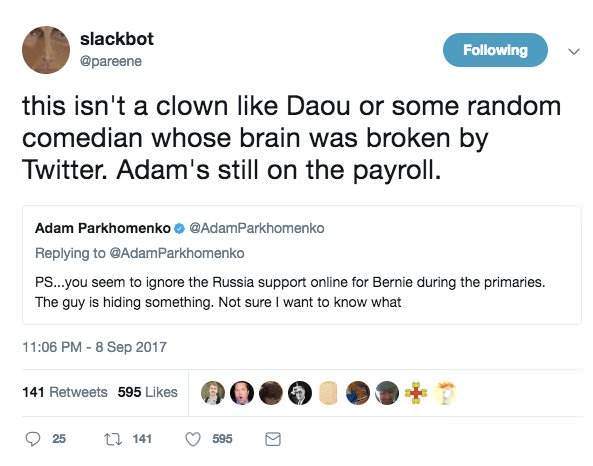 PS…you seem to ignore the Russia support online for Bernie during the primaries. The guy is hiding something. Not sure I want to know what

Meanwhile, once again, Bernie called the most qualified candidate for president ever unqualified. Then said of course she is. Not an apology

Listicle cat site, Buzzfeed, give us some background as to who is Adam Parkomenko…

Hillary Clinton has hired two political operatives from her 2016 presidential campaign to help manage Onward Together, the project she founded this spring with former governor Howard Dean to fund and support a coalition of Democratic groups led by activists and organizers.

The new additions, Emmy Ruiz and Adam Parkhomenko, held central roles on Clinton’s campaign: Ruiz delivered key victories as state director in Nevada during the primary and in Colorado during the general election; Parkhomenko worked in headquarters as her director of grassroots engagement before moving to the Democratic National Committee. Both served on Clinton’s first presidential bid in 2008.

Read also:
The Secret History of the Push to Strike Iran

Clinton’s new group, registered in May as a 501c4 organization with an affiliated super PAC, is working to establish a small but diverse cooperative of about 10 to 12 grassroots efforts, each one focused on a different area of the energy and activism set off by Donald Trump’s election and presidency. Dean said they are still in the process vetting groups to add to the coalition, which already includes organizations such as Swing Left, Emerge America, and Run For Something.

Spectre of War is Haunting Europe

No to War in Ukraine – Stop the War Statement