On some platforms, whistleblowing is only considered an acceptable form of journalism when it exposes enemies of the West. Twitter’s labelling of a Grayzone story that reflected badly on Britain shows the double standards at play.

Earlier this week, journalist Max Blumenthal published a series of leaked documents from the British Foreign Office on his news website the Grayzone, revealing that the BBC and the Reuters Foundation had participated in a covert programme targeting Russia and its neighbours, seeking to push political change within the country.

Former Labour MP Chris Williamson commented on the findings, noting, “These revelations show that when MPs were railing about Russia, British agents were using the BBC and Reuters to deploy precisely the same tactics that politicians and media commentators were accusing Russia of using.”

For those familiar with the BBC and its history as an extension for British foreign policy goals, the leaks are not a surprise. However, that does not mean the news was met with a warm welcome.

Shunned by the mainstream media, the Grayzone report was subsequently targeted by Twitter, with each link being tagged with a warning stating: “These materials may have been obtained through hacking.” 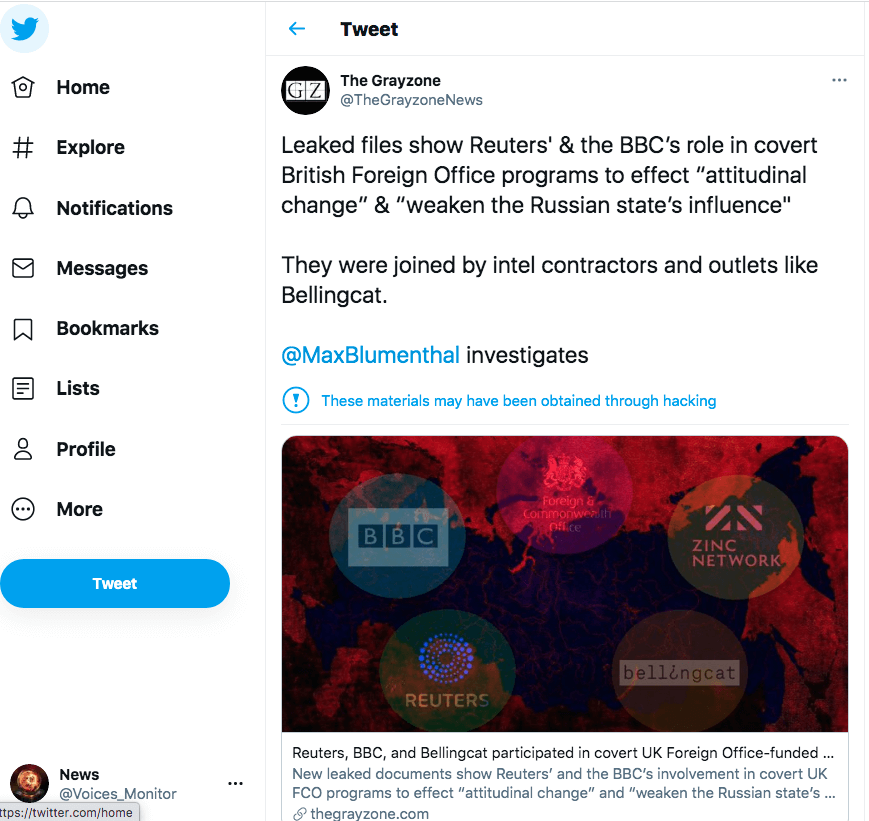 The warning led to an information page stating: “The use of hacks and hacking to exfiltrate information from private computer systems can be used to manipulate the public conversation.”

Although the warning was not carried on some subsequent retweets, at the time of publication it was still present on Grayzone’s original tweet.

Twitter’s accusation is a classic case of it jumping to conclusions, as there is nothing at all to suggest the leaks were a product of hacking. However, this attitude is a direct manifestation of the enormous double standards at play in response to this kind of journalism.

Whistleblowing and leaks which reveal secrets from enemy states constitute a form of journalism and reporting which deserves to be praised. But to many governments in the West, especially those in the United States and the United Kingdom, leaking is considered out of bounds when they are on the receiving end. It is as if the standards they preach to other countries – in particular, transparency and freedom of information – suddenly don’t count.

In exploring this phenomenon, the cases of Julian Assange and Edward Snowden are good places to start. If these men were Chinese, Russian or Iranian, they would be widely celebrated and lauded by the mainstream media as heroes and martyrs who have been subjected to state oppression for simply daring to reveal the truth, as was the case with doctor Li Wenliang and ‘citizen journalist’ Zhang Zhan in Wuhan.

Yet because Assange and Snowden are Western, and in turn directly challenged the US-led security establishment with their leaks on surveillance and various atrocities, they are treated differently, as criminals and fugitives. The mainstream media minimize the coverage accordingly, and make sure their cause or work cannot gain public sympathy. State action against them is not given scrutiny

It perfectly illustrates this very binary mode of thought that those who leak documents against the British government are not fuelled by a desire to advocate truth or transparency, but malicious motivations to spread misinformation and influence public opinion.

Is Twitter saying that it is best the public don’t know how the BBC is essentially being weaponized as a front for British foreign policy? That the notion of public interest essentially does not matter if a given revelation has political ramifications that might be considered undesirable for the West? Or that other journalism is not designed to influence views on a particular subject? So, some secrets are better kept?

Twitter itself is becoming an increasingly unreliable platform on this front. Donald Trump’s presidency has changed the game, from beginning to end. The enormous controversy of the so-called ‘Russiagate scandal’ and then the Capitol riot in January proved to be two enormous turning points which have tipped the platform towards growing regulation and outright censorship.

This would be understandable, if it were not so one-sided. The site’s proliferation of ‘state affiliated media’ labels – which unfairly target certain countries, and not others – as well as its warning labels, are all directly consolidating a status quo advocated by Western powers that only they possess a ‘valid’ notion of truth. In turn, everyone who seeks to criticize their narratives is simply promoting falsehoods and is fuelled by bad intent.

Therefore, what might be described as ‘public interest journalism’, which involves the leaking of confidential documents, is only valid if it compliments one side of the argument as opposed to the other. Deception, censorship and state-led misinformation campaigns are never to be queried if the UK or the US or behind them, while the distinction between ‘criminal’ and ‘whistleblower’ is upheld completely according to preference.

These documents were a massive discovery. If China had been caught doing the same thing it would be front-page news, but instead we have Twitter trying to bury the truth. The Grayzone findings deserve to be shared as widely as possible.

* Tom Fowdy is a British writer and analyst of politics and international relations with a primary focus on East Asia.