Turkey to drill off the islands of Crete, Karpathos and Rhodes

Turkey plans to start drilling south of the Greek islands of Crete, Karpathos, Kasos and Rhodes, claiming it is justified to do so according to its maritime boundaries with the Tripolis-based government in Libya. Requests for drilling submitted by the company Turkish Petroleum Corporation (TPAO) to the General Directorate of Mines and Petroleum have been published in the official gazette of Turkey on Saturday. The TPAO requests to conduct hydrocarbon exploration at all the western-most lots shown in the outline, in the vicinity of the Greek islands.

Sections of 24 blocks outlined in the Turkish Government Gazette on May 30 “come within or beyond 6 nautical miles of the coasts of eastern Crete, Kasos, Karpathos and Rhodes, and overlap the Greek continental shelf,” stressed Skai TV that revealed Ankara’s plans.. 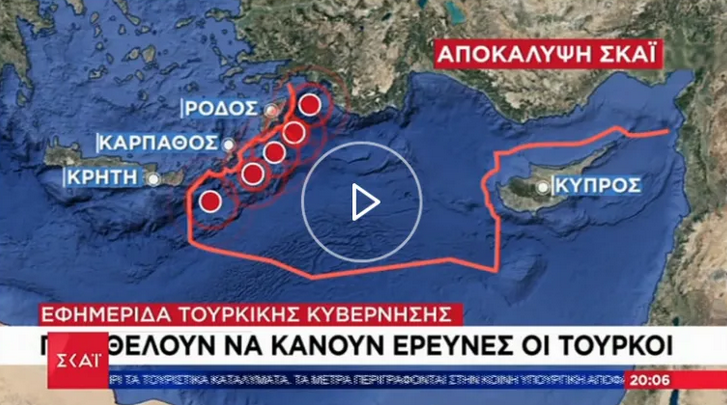 “While Ankara has not designated a block off the island of Kastellorizo, it is clear from the way the blocks are designed that Ankara plans to challenge Greece’s sovereignty in the area by reiterating its position that the Greek islands cannot claim a continental shelf but just 6 nautical miles of territorial waters,” note daily kathimerini.

Citing sources with knowledge of the issue, kathimerini writes that “the move to publish the outline in the Government Gazette demonstrates Turkey’s determination to proceed with the implementation of the borders deal with Libya, even though the map of the coordinates it submitted to the United Nations’ Division for Ocean Affairs and the Law of the Sea, even though the map has not been posted by the UN.”

Ankara’s next step will be to issue navigational telexes reserving the areas where it plans to conduct hydrocarbon exploration, with the ultimate goal of drilling for natural gas and oil.

Turkey is playing with fire in Eastern Mediterranean