After their leaders pledged to strengthen bilateral trade and military cooperation at a bilateral summit last month, Russia and India announced earlier this week that they had sealed a long-discussed $6 billion arms deal despite threats of economic sanctions from Washington. And in the latest indication of the increasingly close relationship between the two countries, Iran, Russia and Iran announced on Thursday that they would meet next month to work out the details of a massive project to open up a new sea-land transport corridor that would that would be a cheaper and shorter alternative to shipping oil and other goods through the Suez Canal.

According to RT, the North-South Transport Corridor (INSTC), the name for the new transit route, will connect India to Russia and Europe via a combination of sea routes and an overland passage through Iran, according to Iranian state-owned news outlet Press TV. The 7,200-kilometers long corridor will reduce the time and costs of shipping by up to 40%. Transport time between Mumbai and Moscow will fall to 20 days. The annual capacity of the transport artery is expected to reach 30 million tons. 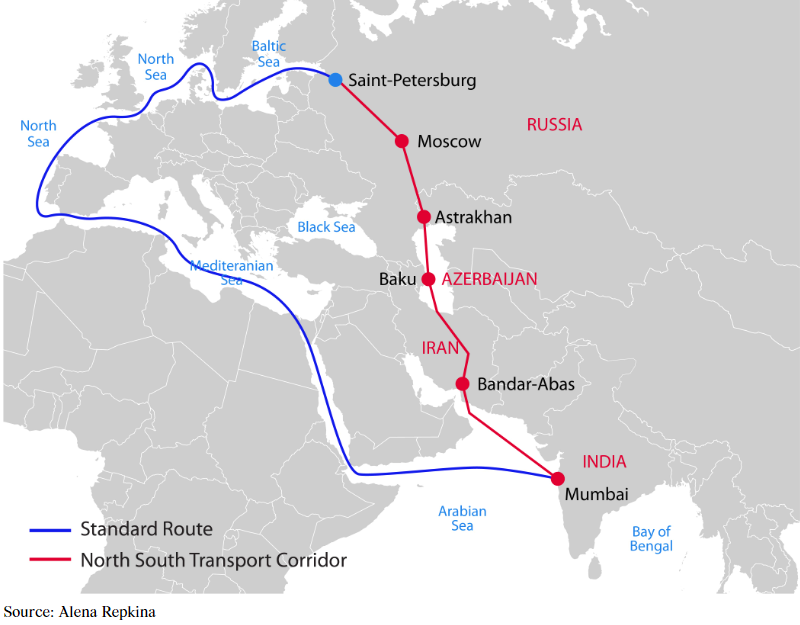 Indian logistics companies presently need to route shipments through China, Europe or Iran to access Central Asian markets. Already, routing shipments through Iran is the least time-consuming option. But the INSTC will have the ancillary benefit of allowing Indian companies to forge a new trade route to Afghanistan without having to travel through Pakistan, as tensions over Kashmir are once again on the rise. The passage corridor through the Persian Gulf will mean billions of dollars in trade for Afghanistan, cutting its dependence on foreign logistics.

Already, India has committed $500 million for developing the Iranian port of Chabahar, which will be a crucial transshipment point for transitioning cargo from sea to land. What’s more, the arrangement has the blessing of China, which could potentially incorporate the passage into its multi-trillion-dollar ‘One Belt, One Road’ initiative to build new trade routes connecting China to Europe, Asia and Africa.

Read also:
NATO Tells Europe: “Prepare for a Russian invasion”. Who Are the Most Dangerous Russians in the World Today?

Indian officials said they’re hoping to start building out the infrastructure required for the route to function as swiftly as possible.

“All issues may be resolved in order to operationalize the (INSTC) route as early as possible,” according to Indian Commerce Minister Suresh Prabhu, as quoted by the media.

The alliance of these four countries should unnerve the US. As it stands, the rise in bilateral trade denominated in rubles, yuan and rupees, while modest so far, is set to grow, with plans to eventually undermine the dollar’s hegemonic grip on global trade settlement. And with US sanctions on Iran set to take effect on Nov. 4, the Iranian regime only stands to benefit by encouraging the blooming economic partnership between Russia and India, as Russia implements its plan to circumvent the dollar, and, by extension, Treasury Department sanctions.