When Swedish writer and Marxist intellectual Jan Myrdal died last month on October 30, 2020, The New York Times aptly described him as “author and provocateur” whose work was seen as “overly sympathetic to authoritarian rulers”.

Myrdal did indeed provoke the Indian authorities so much that the junior home minister in the second term of the UPA government was forced to make a statement in the Rajya Sabha, accusing the Swede of hobnobbing with the Maoists. The security forces at that time were engaged in a bloody conflict with the armed rebels in central India and then Prime Minister Manmohan Singh had declared the Maoist insurgents as the “biggest threat to India’s internal security.”

That, however, did not deter Myrdal from openly talking about his meeting with top Maoist leadership.

Jan came to India in 2010, visited the Maoist camps in the forests of Bastar in Chattisgarh to meet the top leadership of the banned outfit. He wrote a book, Red Star Over India, detailing his interactions with the Maoists including the ever-elusive general secretary of the party, Ganapathy.

He again came to India in 2012 for the launch of his book where I met and interviewed him.

That was two years before Narendra Modi took over as the prime minister of India.

That was also the time when writer Arundhati Roy and Kashmiri separatist leader Syed Ali Shah Geelani would share the dais in New Delhi to openly talk about ‘azadi’ for the Kashmiri people, and get away with a few disapproving statements from the politicians. It now feels like a distant past where expressing unorthodox opinions about the government was not viewed as deshdroh (treason).

Ironically, while Roy was spared a sedition case, others were not so lucky.

Read also:
Salvini revealed - a friend of US and Netanyahu, not of Russia or China

In an alleged encounter in July 2010, the Andhra Pradesh police killed Maoist leader Cherukuri Rajkumar alias Azad and accompanying journalist Hem Chandra Pande. The “encounter” killings moved the Supreme Court so much that it did not mince words in criticising the state and famously said: “The republic cannot kill its own children.”

Jan Myrdal found it quite interesting that, as he put it, one arm of the state was allegedly organising extra-legal killings and, at the same time, another arm i.e. the Supreme Court was criticising it in no uncertain terms. He called it “a rather typical Indian” phenomenon.

During the interview, I asked him about his views on India as a democracy. His answer was unequivocal: “On the one hand you have this legal structure of the state, and on the other hand you have the decidedly extra-legal behaviour of the state. So, you have one arm of the state – the Supreme Court – taking up these cases (of extra-judicial killings), but another arm is driving the fake encounters.” 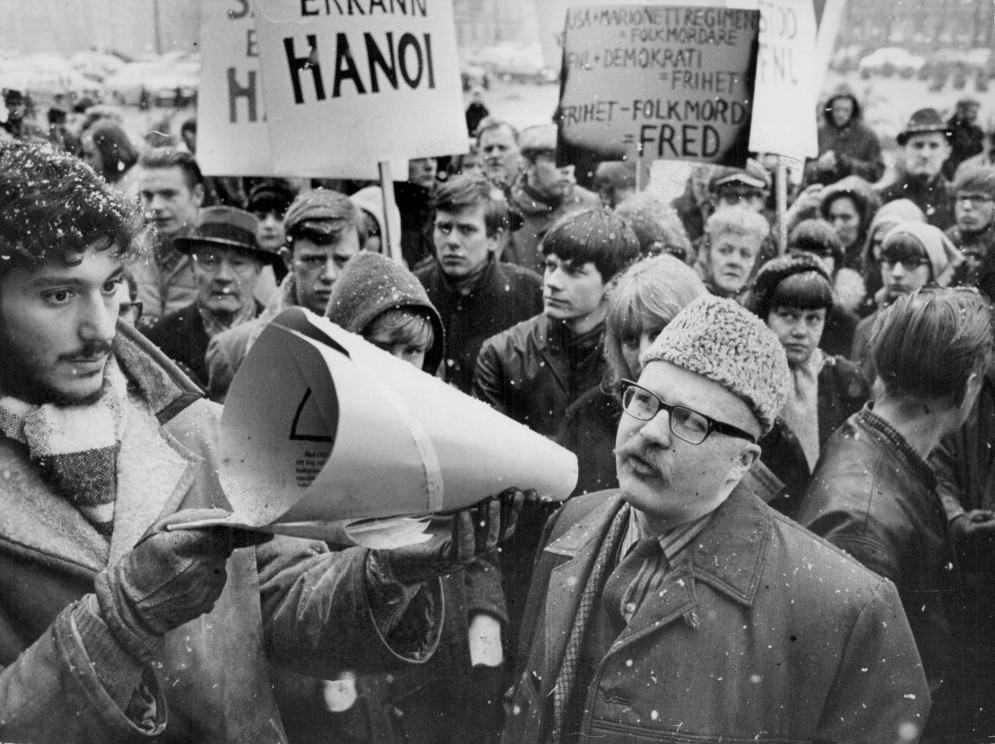 Jan Myrdal speaking at a demonstration against the Vietnam War at Medborgarplatsen in Stockholm, 1966. Photo: Svenska Dagbladet via IMS Vintage Photos/Public Domain

Born to Nobel laureate parents, Gunnar Myrdal and Alva Myrdal, in 1927, Jan was one of Sweden’s foremost writers who had the reputation of an uncompromising, albeit controversial, public intellectual known for his unflinching Marxist-Leninist leanings.

He penned several books on politics, travel and art. Later he also became a major literary figure in Sweden known for his autobiographical novels, which dealt with his troubled childhood and his strained relationship with his parents. Still, his worldview was greatly shaped by his illustrious parents. His father Gunnar Myrdal’s seminal book, Asian Drama (1968), remained a Bible for the ideologues and supporters of the Third World. He dealt with the question of economic inequality between different countries – why only a few countries were super-rich while a majority of them were facing poverty and deprivation.

Jan himself was drawn to the Marxist-Leninist ideology quite early in life. “I have worked as a Communist from the spring of 1943 when I was 15. But I am a non-party communist”, he told me. During the initial years, he was a supporter of the Soviet communism but “the conflicts in the Third World and the developments in the so-called socialist world led me to leave the Party, but I am not a renegade. I can say the Party had left me.”

He revisited the same village twenty years later only to be massively disappointed to see the developments that followed Mao’s death. China had changed beyond recognition under Mao’s successor Deng Xiaoping, who famously said: ‘it doesn’t matter whether the cat is black or white, as long as it catches mice’, justifying the introduction of free-market in communist China. Jan, like many other supporters of Mao’s thought, became a staunch critic of Deng Xiaoping. His book Return to a Chinese Village is a narrative of his disapproval of Deng’s China.

Jan Myrdal’s interest in the Maoist ideology and politics drew his attention to the Maoism-inspired peasant struggles in India too. The first wave of the Naxalite movement had gradually faded away after its leader Charu Majumdar died in police custody in 1972. But when the fragments of the movement regrouped under Naxalite leader Chandra Pulla Reddy in Andhra Pradesh in the late 1970s, Jan spent time with the armed squads under Reddy’s command and published his first book, India Waits.

He predicted that a powerful left-wing movement was waiting to explode in rural India. Reputed American journalist Harrison Salisbury commended the book saying, “Jan Myrdal is always worth reading because in his anger and bitterness there lurks real tragedy. India Waits is pure Myrdal. I disagree violently with much of what he says but I am glad he has written.”

So, is Maoism the answer? I asked Jan Myrdal the same question I posed to Arundhati Roy after she published a long essay, Walking with the Comrades, on her return from the Maoist stronghold in Bastar.

“Of course, not!” Roy was very clear in her outright rejection of Maoism as a solution to India’s woes. But Jan Myrdal chose to elaborate. He said Maoism in a general way was a reasonable answer. But then “you will have to discuss what Maoism means, and you must remember that there is no outside force that can determine things for you.”

Jan’s words had an unmistakable old polemical tone that filled university halls in the 1960s and 70s. The Swedish teenager who began his journey as a Communist nearly eight decades ago, stubbornly refused to reset his ideological leanings till his death.

Rajesh Joshi is an independent journalist and former editor of BBC Hindi Radio.