In the first week of the month of October the US informed Turkey and Russia of its intention to withdraw from north-east Syria (NES). Turkish President Recep Tayyib Erdogan pulled out a plan prepared over a year ago to move forces into NES and take control of cities like Manbij, Ain al-Arab and Ras al-Ayn: an area 440 kilometres long and 35 kilometres wide. The US central command and the Russian military command, as well as other countries including Syria, were informed of the Turkish intention to move forward to fill in the gap. Turkey believes this incursion into the Syrian territory serves its national security and will relocate millions of Syrian refugees living in Turkey, and those who will move out of Idlib once the liberation of the city is in process.  Erdogan considers it necessary to create a safe zone between the Turkish borders and that part of Syria under control of the Syrian branch of the PKK, the YPG, an organisation that figures in the US, Europe, NATO and Turkey lists of terrorism.

The quick reaction by Turkey caused alarm in Washington where President Donald Trump sent a letter – considered humiliating by Turkey – to his Turkish counterpart asking him “not to be a fool” and to wait before acting. Simultaneously, President Putin called a meeting for his National Security Council to discuss the US withdrawal and the Turkish intention to replace US forces in NES. Intelligence sources confirmed US withdrawal preparations. Syrian President Bashar al-Assad was consulted and informed about US and Turkish intentions.

Decision-makers in Syria evaluated the situation: preliminary information indicated the seriousness of US intentions to withdraw, notwithstanding President Trump’s record of changing his mind and altering decisions at the last minute. It was agreed that the US move should be taken seriously into consideration, with plans to face it and gather the necessary forces to deploy in NES.

Damascus tried to contact the Syrian Kurds, before the official US announcement of departure from NES, to test their reaction to the game-changer decision of withdrawal. The YPG was dismissive. Damascus understood that the Kurds still placed their hopes in the US, British and French intervention to influence Trump’s withdrawal decision. The Kurdish political leaders were sceptical about the ability of Trump to implement this intention.

Damascus was convinced the Kurds had not learned their lesson and were gambling on the continuing presence of foreign forces – the US, EU (British, French and Italian) and Israel – who had, in fact, decided to withdraw and end their illegal presence in NES. Syrian officials knew the Kurds would be the biggest losers. But for the Syrian government, it was unacceptable to leave all of NES under Turkish control if the US were to pull out its forces.

Read also:
The Archbishop of Cyprus criticizes strongly the plans of President Anastasiades

Decision-makers in Syria understood that Russian and Iranian officials had agreed on the importance of direct contacts with Turkey to coordinate the presence of forces in NES. Their goal was not to increase the tension with Turkey nor to confront the Turkish forces on Syrian soil but rather to organise this presence and limit its advance to allow the US forces to withdraw. It would have been in the apparent interest of US forces to watch a Turkish-Syrian confrontation in NES, an eventuality that Russia and Iran sought to avoid.

Ankara’s motive and concern were the fact that the Syrian Kurds – a branch of the PKK organisation on the list of terrorism – would bet on the support of US forces and their European allies up until the day of withdrawal of these forces. It was imperative to fill in the gap and close the road to any possible future return of these forces in Syria. Turkish forces were assuring the forceful handover of land to the Syrian government. Nevertheless, Damascus would now have to face another occupation in the future– Turkey – that is not likely to withdraw in the near future regardless of all the promises coming from Ankara or Moscow. 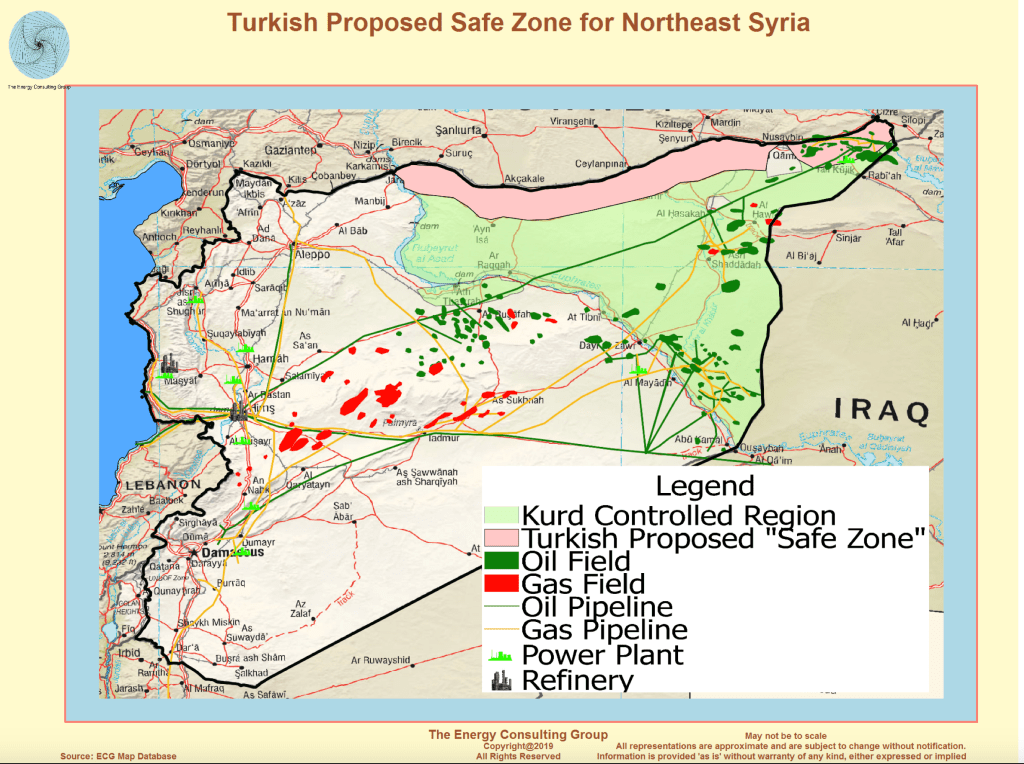 When Turkey pushed its proxies and forces into NES, the Syrian Kurds awoke to the danger. Their military commander General Ferhat Abdi Sahin, aka Mazloum Abdi, believed the only solution was to ask protection from Russia and the central government in Damascus. Russia, unlike the Syrian Army, has limited ground troops. The Russian military directed the Kurds to negotiate with Damascus. Negotiations were conducted at the military base of Hmaymeem and in Damascus. Qamishli airport – under Syrian Army control – acted as a hub for the Kurdish delegation to talk with Russian and Syrian government military officials.

General Abdi, who fought with the PKK leader Abdallah Ocalan, notwithstanding the disapproval of the Kurdish political leadership in NES, signed off a petition for intervention, asking the Syrian Army to defend Kurdish-US controlled areas. Damascus is aware of Kurdish-Israeli collaboration and the failed Israeli effort to keep US forces in NES.

There was no time to organise a fast Syrian Army deployment in an area almost five times as large as Lebanon (40,000 – 50,000 sq km). Russia and Iran were working together to slow down President Erdogan and minimise the cost of his invasion. Turkey showed understanding while negotiating with Russia and Iran and said it was ready to negotiate and organise the presence of all forces in the disputed area but would not tolerate any Kurdish armed presence in the area. President Erdogan committed not to attack the Syrian Army in any city where the soldiers of Damascus were present.

Last week, President Bashar al-Assad told a visiting Russian delegation led by President Vladimir Putin’s special envoy to Syria Alexander Lavrentiev that he rejected any occupation of his country and that the US was due to leave the country sooner or later. Assad expressed concern that Turkey might decide to remain in the country for many years before negotiating a withdrawal. The central government in Damascus is prepared to resist such occupation and will no doubt support domestic resistance against such an occupation. Russia confirmed its support for the full integrity of Syrian territory and its goal of ending the war in Syria, terminating the presence of all occupation forces, and its support for constitutional reforms to speed reconciliation.

Russia said it was possible to talk to Turkish President Erdogan and reach a reasonable agreement because, once a clear deal is reached, there are more chances that Turkey keeps its commitments, unlike President Trump who changes his mind daily. Syria and its allies decided to keep monitoring developments, keep the hotline open and prepare more forces to push into NES.

Trump’s soldiers are withdrawing from the main provinces and have completed their withdrawal from Raqqah and the east of Aleppo. US withdrawal from the borders with Turkey triggered a race of the Turkish forces and their proxies who managed to occupy Ras al-Ayn to keep control over the city. The Syrian Kurds – although they are still trying to change Trump’s mind by asking him to stay in Syria- are perhaps more aware they have no foreign allies left but Russia, who can serve as a guarantor to preserve the cities and villages they live in after US withdrawal.

The US President has given his Turkish counterpart President Erdogan what he wanted: a ceasefire to allow the Kurds to pull out from the Syrian zone coveted by Turkey, forcing the Kurds to give up on this territory and move its forces inland., which they did by abandoning the city of Ras al-Ayn over the weekend. This is even worse than a total US withdrawal of the entire area, from the Kurds’ point of view. Turkey’s proxy forces had proven ineffective fighting against ISIS in 2016 and against the Kurds since the beginning of the military operation. By delivering cities without resistance, Turkey has reached its objectives with fewer casualties.

Trump never promised the Kurds a state, nor had he promised to remain indefinitely in Syria to protect them. The departure of the US forces is an inevitable outcome even in countries it has occupied over decades (Afghanistan and Iraq are the best examples). The Syrian Kurds believed in their dream to form their own state because the partition of Iraq and Syria seemed likely to them. Had this happened, northern Iraq would have been the eastern part of the Kurdish state and Rojava (NES) its western part. 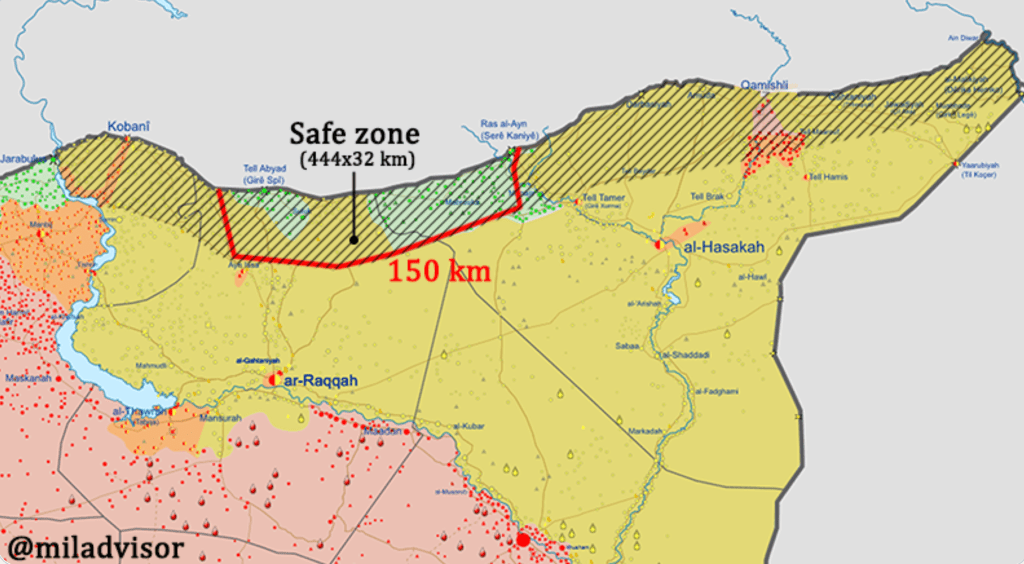 But the “new Middle East” plan has failed and the continuous presence of US forces is not only illegal but also serves no US strategic purpose. Trump promised to pull out and he is likely to fulfil this promise. This will benefit his forthcoming electoral 2020 campaign.

President Erdogan is left with a nearby ally, Russia, with whom he will negotiate and organise the presence of his troops in NES. The American forces are leaving in an organised way. Trump has not clarified his intentions towards Syrian oil and gas fields under US control. He wishes to give the control of NES to the Kurds but is keeping no troops in the area, only at al-Tanf borders (150- 200 US servicemen). He is afraid of Iranian control over the oil fields; Tehran has been supplying the Syrian government with oil for the last 8 years. Its last shipment of 2.1 million barrels created a storm between Iran and the UK involving the confiscation of a supertanker and ships of both countries.

The Syrian Kurds have been selling oil to Damascus while they have controlled NES notwithstanding the US requests that they refrain from energy delivery to the Syrian population. The Kurds in Syria now recognise the Syrian army as their only remaining defenders, with the guarantee of Russia. If the US is really concerned about the safety of the Kurds, their only option is to support a stable central government in Damascus to protect the Kurds.

The presence of the Syrian Army in Manbij and Ayn al-Arab has spoiled the Turkish plan to control an area 440 kilometres long and 35 kilometres wide. The two cities are in the middle of the zone Erdogan aims to occupy. This is why the Putin-Erdogan meeting on Tuesday is crucial for the future of Syria. The 1999 Adana agreement between Syria and Turkey will be revised; the reform of the Syrian constitution will likely be discussed to speed up its consent to be implemented and ensure the withdrawal of Turkish forces if indeed that is Turkey’s only motive to stay in Syria.

Much has been achieved to end the war in Syria. A peaceful solution is in sight and the end of the Jihadists control of Idlib is near.

All images in this article are from the author

The original source of this article is Elijah J. Magnier