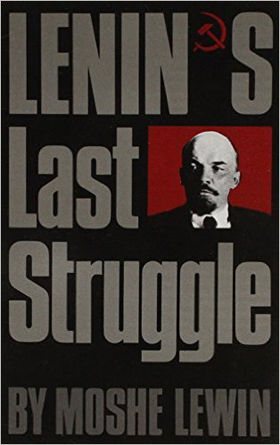 I have previously written about the excellent and informative book, “The Soviet Century” by the Soviet-born historian Moshe Lewin, but now I’d like to take on an earlier book by Lewin, “Lenin’s Last Struggle.”

This book predated “The Soviet Century” by a number of years, so you might think that it could be skipped since anything in it would be covered in, and updated by the later book. This would be wrong, though. “Lenin’s Last Struggle”is rich in detail and goes into certain questions that were to profoundly shape the future of the Soviet Union, things which are not covered in such depth by “The Soviet Century.”

Moshe Lewin was a collective farm worker in the USSR and a soldier in the Soviet army. He later became director of studies at the Ecole Pratique des Hautes Etudes in Paris, a fellow of the Kennan Institute, a senior fellow of Columbia University’s Russian Institute, and later emeritus professor of history at The University of Pennsylvania.

Lewin paints a picture of the frustrations facing Lenin in this final period and his increasing misgivings about Joseph Stalin. It also illustrates Stalin’s growing confidence in the face of Lenin’s physical decline and shows, sadly, the total inability of anybody other than Lenin himself to stop the rise of Stalin and the absorption of the Bolshevik Party into the emerging Stalinist system.

Lewin reveals that toward the end Lenin desperately sought allies who could stand up to the Stalinist onslaught after he himself was gone. But this was wishful thinking on Lenin’s part:There was nobody capable of playing the game of political intrigue that would have been necessary. The author deals with the early 1920s, particularly1922-24, the last years of Lenin’s life, during which he was sick most of the time. Sometimes he was able to carry on nearly as normal, however at other times his illness restricted his activity, sometimes severely.

Read also:
1000 ghostly figures march the streets of hamburg in protest for the G20 summit

During this period – ominously, as it turned out – it was Stalin who was charged by Central Committee of the ruling Bolshevik Party with supervising Lenin’s convalescence. Because of this, Stalin was able to greatly influence what Lenin was told and what he was able to do. For his part, Lenin came to recognize and to deeply resent Stalin’s attempts to control him.

Lewin makes his point in part through the retelling of several anecdotes but also by focusing on two major policy questions of the time. One was the debate over the Bolshevik government’s monopoly on foreign trade during the New Economic Policy (NEP) period. NEP was a realistic response to the state of isolation that the Bolshevik government found itself in, and while it was meant as a practical means of providing some “breathing space” for the revolution until the more advanced nations could come to its assistance, it also provided the anti-Bolshevik forces with certain openings.

Lenin strongly believed that, in view of the potential danger that could be represented by outside forces, it was very important that the foreign trade monopoly be maintained. Others, including Stalin and his supporters, believed that the trade monopoly should be relaxed. The indisposed Lenin significantly asked Leon Trotsky to champion this cause for him. This time, at least, Lenin was able to restrain Stalin, who was not yet powerful enough to move against Trotsky.

Lewin next goes into considerable detail about what has been called the Nationality Crisis which arose during the formation of the Soviet Union from the former constituent parts of the old Tsarist empire. In particular, he focuses on the infamous incident in which Stalin’s associate Ordzhonikidze struck a Georgian communist, a supporter of the leading Georgian Bolshevik Midivani, in a dispute over the Georgian position in the then-proposed Soviet Union. Lenin was greatly disturbed by this incident. It’s instructive in view of what would take place a few years later that such a use of non-deadly physical force against a communist should have been found so shocking. Lewin relates how Stalin and his associates did everything they could to keep Lenin from making an independent analysis, but in the end Lenin made his own inquiry, completely independent of Stalin, and his views on the situation changed completely. Lenin once again called on Trotsky for help and support and, as Lewin speculates, this must have disturbed Stalin greatly.

Read also:
Sergei Glaziev on the Soviet collapse. An interview with Dimitris Konstantakopoulos

Toward the end of the book Lewin goes to considerable length analyzing what has been called Lenin’s “Testament,” a document which gives an assessment of the people he evidently sees as the future leaders of the country. Lewin reports that the “Testament” in its entirety consisted of several parts and was written over an extended period. Although this first part of the “Testament” is only mildly critical of Stalin, Lenin concludes it by calling for the removal of Stalin as General Secretary of the Central Committee. Lewin goes further to suggest that Lenin also wished that Stalin should not only be removed as General Secretary but that he, and his supporters, should be expelled from the party. Lewin ends the book by speculating, with some documentary basis, on what might have happened in the Soviet Union had Lenin not disappeared from the scene so early.

The book features an extensive appendix and, providing extremely important insight into Lenin’s final thoughts, the essay “Better Fewer, but Better” is reproduced in its entirety. This essaywas one of Lenin’s last works, if not the last, published as it was in March of 1923 (Lenin died in January of 1924). In the essay Lenin, among other things, implicitly attacks Stalin and his methods of organization. It represents Lenin’s ideas on combating what he saw as disturbing trends developing in the Soviet system and offers some light on what may have been his plans for the future.

The Soviet Century by Moshe Lewin