NATO is generally seen in a positive light across publics within the alliance, despite lingering tensions between the leaders of individual member countries. A median of 53% across 16 member countries surveyed have a favorable view of the organization, with only 27% expressing a negative view. But opinions of NATO and related issues vary widely across the countries surveyed, especially regarding the obligations of Article 5 of the 70-year-old Washington Treaty, which declares that an attack against one member nation is considered an attack against all members.

Positive ratings of NATO among members range from a high of 82% in Poland to 21% in Turkey, with the United States and Germany in the middle at 52% and 57%, respectively. And in the three nonmember states surveyed, Sweden and Ukraine see the alliance positively (63% and 53%, respectively), but only 16% of Russians say the same. 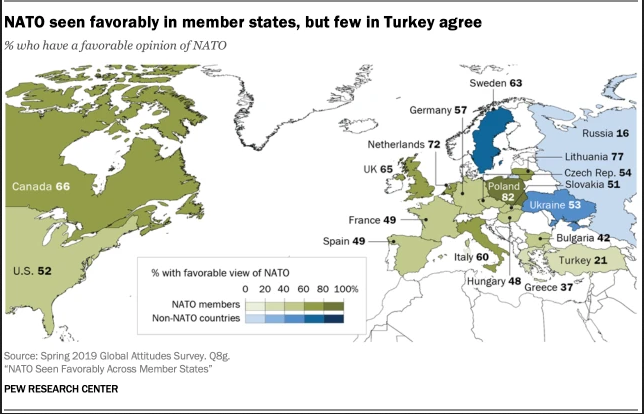 Favorable views of the organization have fluctuated over time among both NATO member and nonmember countries. Since the late 2000s, favorable opinions of NATO are up 10 percentage points or more in Ukraine, Lithuania and Poland. However, positive opinions of NATO are down significantly in Bulgaria, Russia, Germany and France over the past decade, with double-digit percentage point declines in each of these countries. Favorable views of the organization are also down significantly in Spain and the Czech Republic. 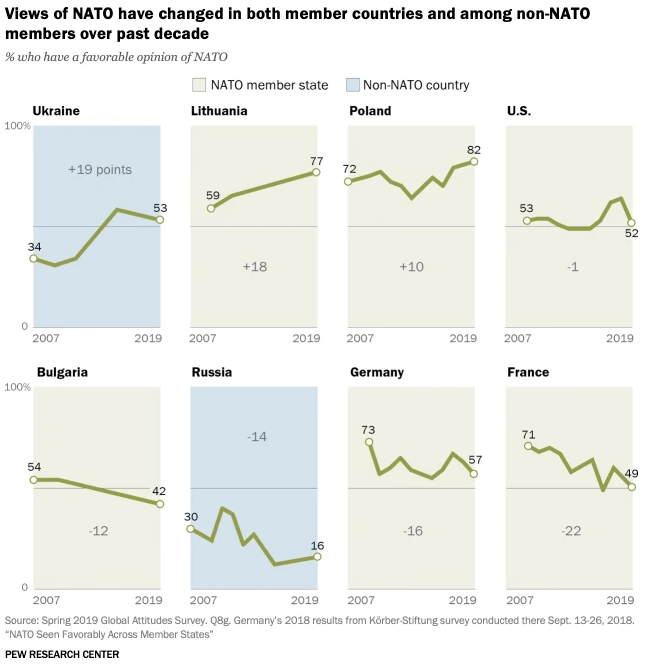 In addition, across several countries surveyed, favorable views of the organization are related to ideological orientation, with those on the right sharing a more positive view than those on the ideological left. 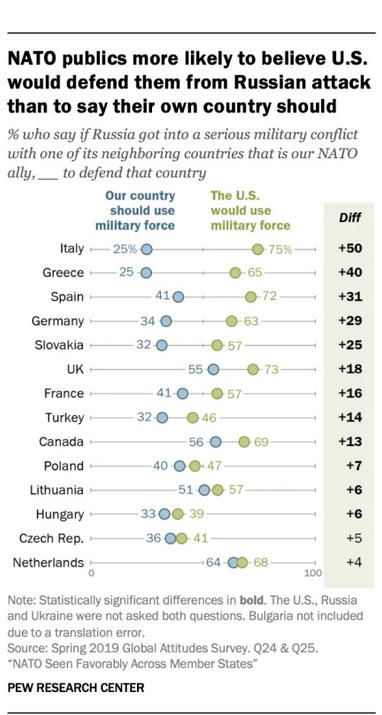 NATO serves as a political and military alliance for its 29 member states spanning Europe and North America. Founded in 1949 to provide collective defense against the Soviet Union, the alliance seeks to balance Russian power and influence, in addition to a host of other operations.

These views have changed significantly over the past decade in some countries. In Ukraine, Russia, Slovakia and Germany, more say military force is sometimes necessary than said the same in 2007. And in Italy, Spain and the Czech Republic, publics have grown less inclined to agree.

On the topic of territorial ambitions, when asked if there are parts of neighboring countries that really belong to their country, relatively few surveyed agree. However, among NATO member states, majorities in Hungary, Greece, Turkey and Bulgaria agree that parts of other countries belong to them. In many European countries, those with a favorable view of right-wing populist parties are more likely to support this statement.

These are among the key findings from a Pew Research Center survey of 19 countries, including 16 NATO member states, Sweden, Russia and Ukraine. The survey was conducted among 21,029 people from May 13 to Aug. 12, 2019. Throughout this report, German results are occasionally sourced from a series of surveys conducted in Germany by Körber-Stiftung, in partnership with Pew Research Center.