From Malaysia to the Argentina, peoples movements and organizations mobilized on Saturday March 16, to express their solidarity with Venezuela amid one of the most brutal attacks on the country by the US and its allies

his weekend, movements and organizations from across the world mobilized with the goal of showing to the United States and their lackeys that the people of the world stand with Venezuela and its democratically elected President Nicolás Maduro and are completely against the possibility of a military intervention in the South American country. Mobilizations and activities were held in front of US embassies and consulates; in front of symbols of US capital; and also in front of embassies and consulates of the Bolivarian Republic of Venezuela.

The call for the mobilization came out of the International Peoples’ Assembly in Solidarity with the Bolivarian Revolution and Against Imperialism which took place in Caracas, Venezuela from February 24-27. The 500 delegates from 85 countries, representing over 180 organizations, left the assembly with the commitment to intensify the campaign of solidarity with Venezuela in their own countries, with the first action being the International Day of Struggle for Peace in Venezuela and the cessation of the economic blockade on March 16. The date was chosen because it marks the 16th anniversary of the invasion of Iraq by the United States, United Kingdom, Australia and Poland, another criminal war led by the US to destroy a country in order to control its natural resources.

Across the world, the eight-starred Venezuelan flag flew high, which chants of “Maduro Yes, Yankees No” and “Yankees go home!” echoing. Many also pointed to the latest attacks on the national electrical system as an act of intensification of the hybrid war being waged against Venezuela by the US and have called for the attacks to be classified as a crime against humanity.

The global day of solidarity with Venezuela kicked off in Johannesburg with a massive protest outside the US consulate located at the center of finance monopoly capital, Sandton. The protest was organized by the National Union of Metalworkers of South Africa, Socialist Revolutionary Workers Party, South African Federation of Trade Unions and the United Front.

Hundreds of militants from social and political organizations, trade unions participated in an activity in Buenos Aires, Argentina to denounce US imperialism and manifest their solidarity with Venezuela and Nicolás Maduro under the slogan “Yankees al carajo” (Yankees go to hell) from Chávez’s historic speech in 2008 when he expelled the US ambassador from Venezuela.

In Lima, Peru the Anti-Imperialist Coordinator for Sovereignty in Latin America along with the organizations and movements that are part of the Peru Chapter of ALBA Movements mobilized in the Plaza San Martin. 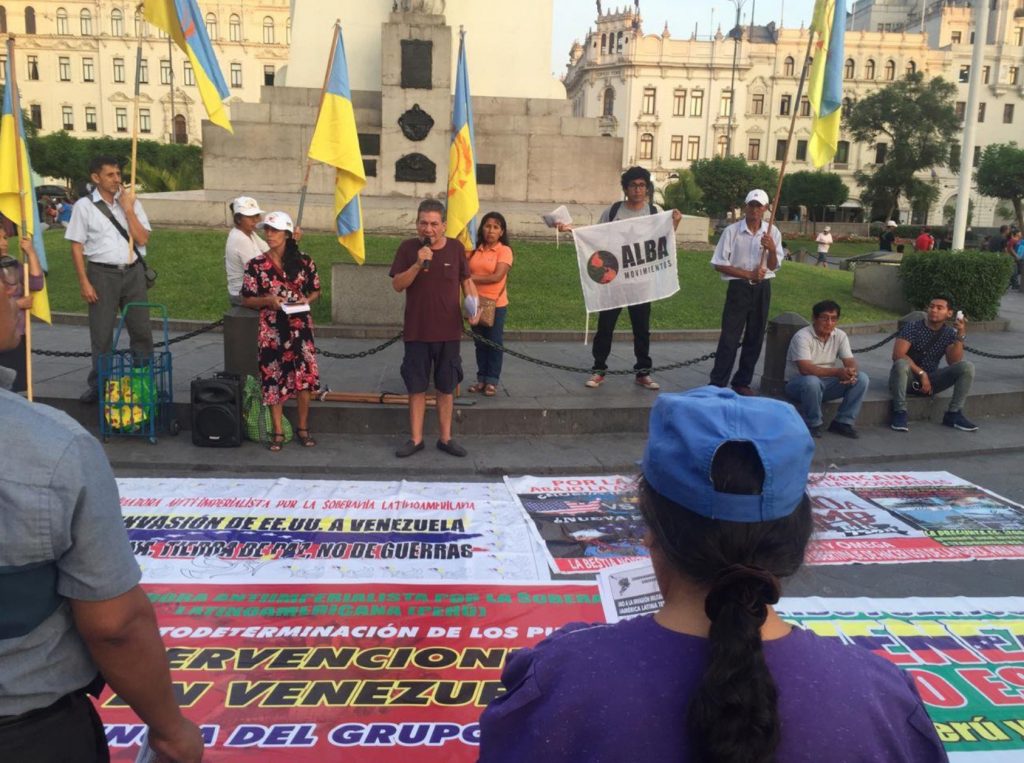 In Mexico City, organizations held a series of actions starting with a rally against North American interference outside the US embassy in the city and then a Latin American cultural activity in the central Zocalo, or plaza, of the city. 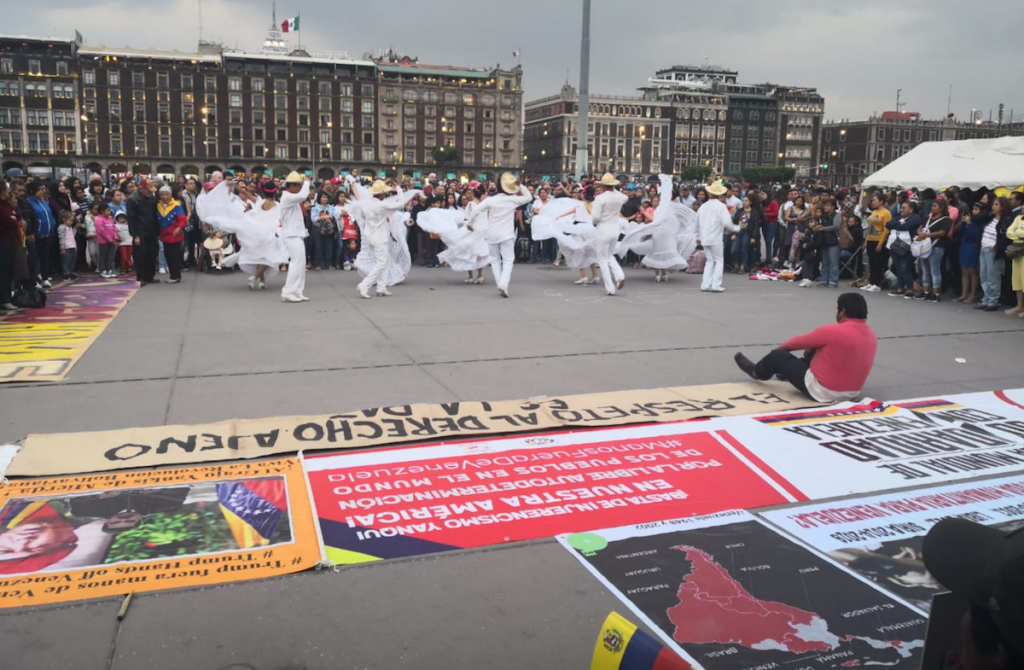 Militants of the Socialist Party of Malaysia delivered a letter of protest to the US embassy in Kuala Lumpur. During their action the police tried to block them from crossing the road.

In Venezuela thousands of people took to the streets in Caracas to denounce the continued aggressions against them by the US and its allies and their democratically elected president, Nicolás Maduro. The Motorcycle Drivers Movement of Venezuela part of the National Federation of Motorized Drivers of Socialist Bolivarian Venezuela participated in a coordinated action to spell out “Trump Hands Off Venezuela”. 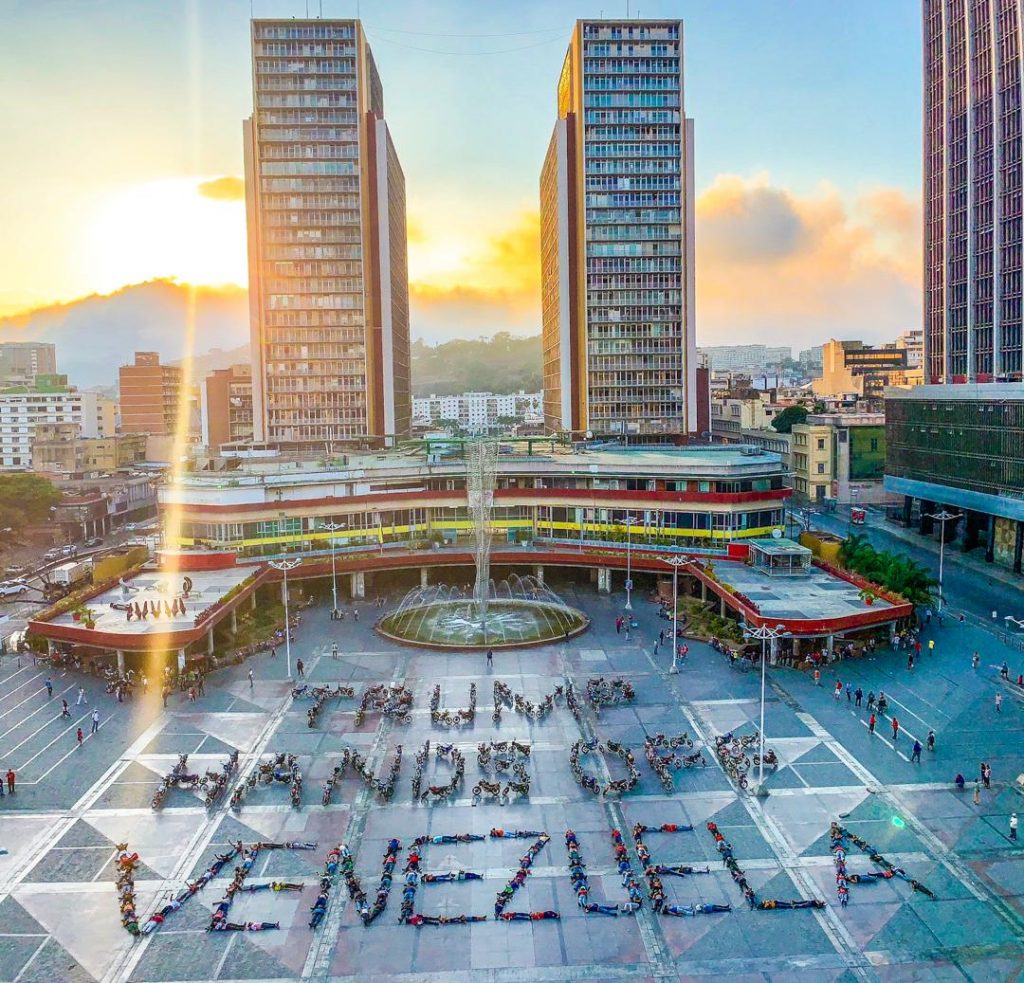 The Socialist Party Zambia also participated in the global mobilization in solidarity with Venezuela and against US imperialism.

The teachers and students of the Hugo Chávez School, along with the graduates of the Latin American School of Medicine in Venezuela, expressed their support to President Nicolás Maduro and the sons and daughters of the homeland of Bolívar and Chávez. 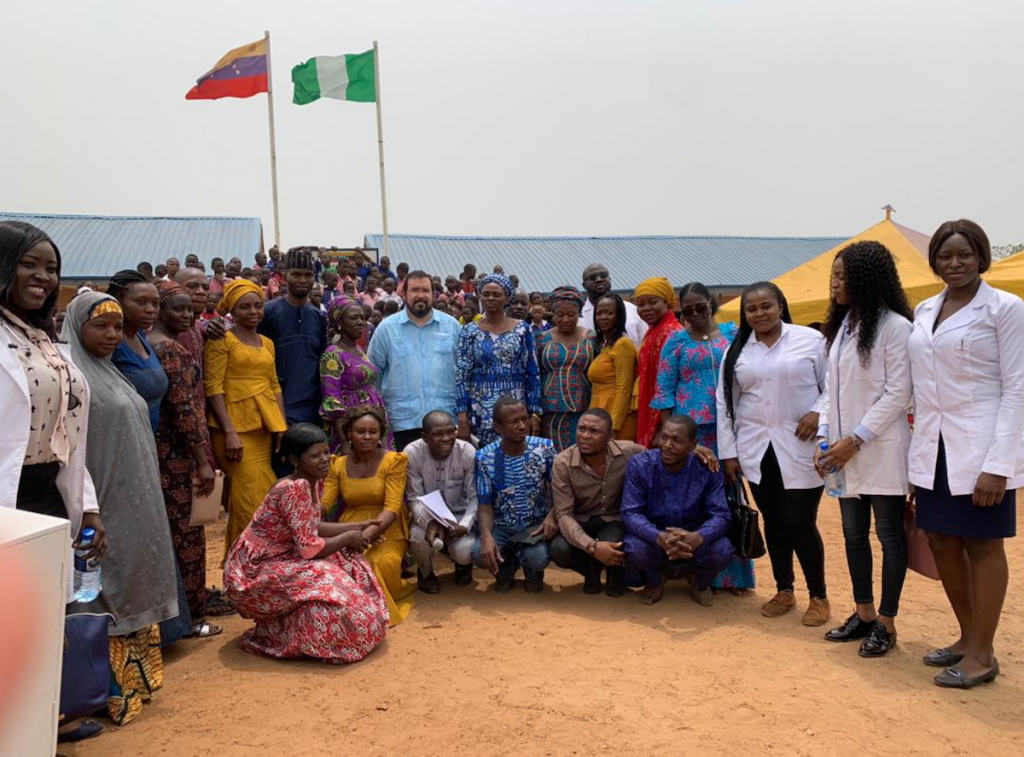 Hundreds of people mobilized outside the White House in Washington DC, USA to denounce US imperialism and aggression against Venezuela. They also manifested their support and solidarity to the Venezuelan people and their president Nicolás Maduro.