Low birth rates, rampant emigration and an ageing population all take their toll on a country facing critical labour shortages.

Percentage-wise, other former communist Eastern European countries have lost more population than Romania in the past three decades. What sets Romania apart is the sheer scale of the loss.

That is more than the entire population of several of the other former communist states.

Of course, the reason that the number is so high is because Romania is the second-largest of the former non-Soviet countries in Eastern Europe.

It is a national trauma nonetheless, leading to critical labour shortages and a lack of key personnel such as medical staff. It results in the depopulation of rural areas and many small towns, or just leaves them with elderly people.

As elsewhere in the region, Romania has been affected by low birth rates, emigration, an ageing population and very little immigration or migrant return to stem the decline.

And the projections do not look good: according to the Romanian National Institute of Statistics, by 2050 the country’s population could shrink to 15 million or 35 per cent less than in 1990. (A UN projection is less gloomy, foreseeing population at 16.39 million in 2050, a fall of just over 30 per cent.) 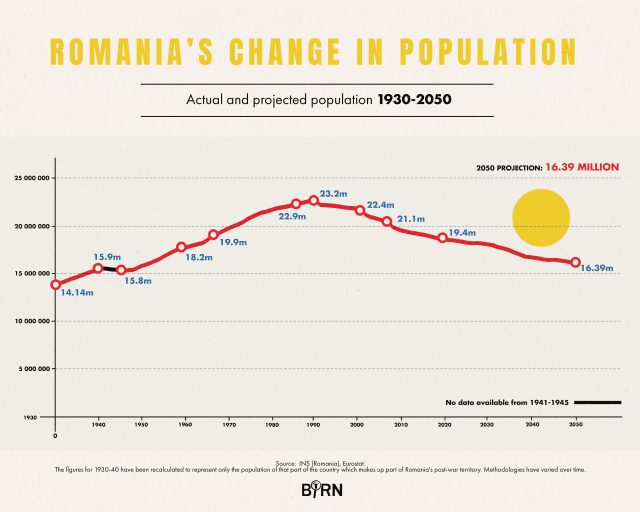 If Romania’s shrinking population is a problem today, it is one that Ceausescu anticipated and feared.

In 1967, in his bid to make Romania 30 million strong, he as good as banned abortion and contraceptives, leading to more than two decades of domestic and national misery including back street abortions and huge numbers of children abandoned in grim orphanages.

The overall Ceausescu legacy is a major reason why the country emerged from communism in such dire straits and why it has taken so long to recover. 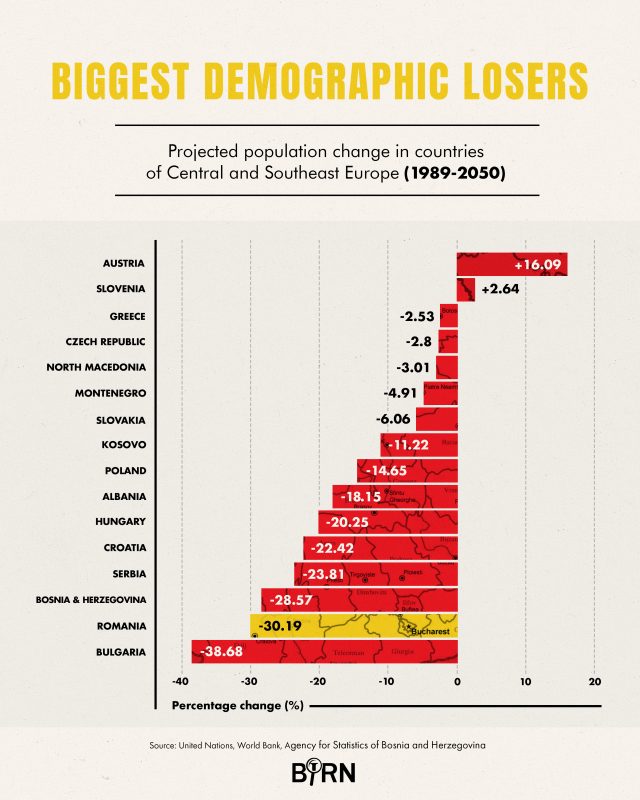 Read also:
The Ukraine: The USA is responsible for the escalation and must stop it before provoking a world war

With so many young people out of the country though, that is not enough to halt the natural decline.

The difference with Western European countries, of course, is that they have significant immigration to make up for natural demographic shortfalls. 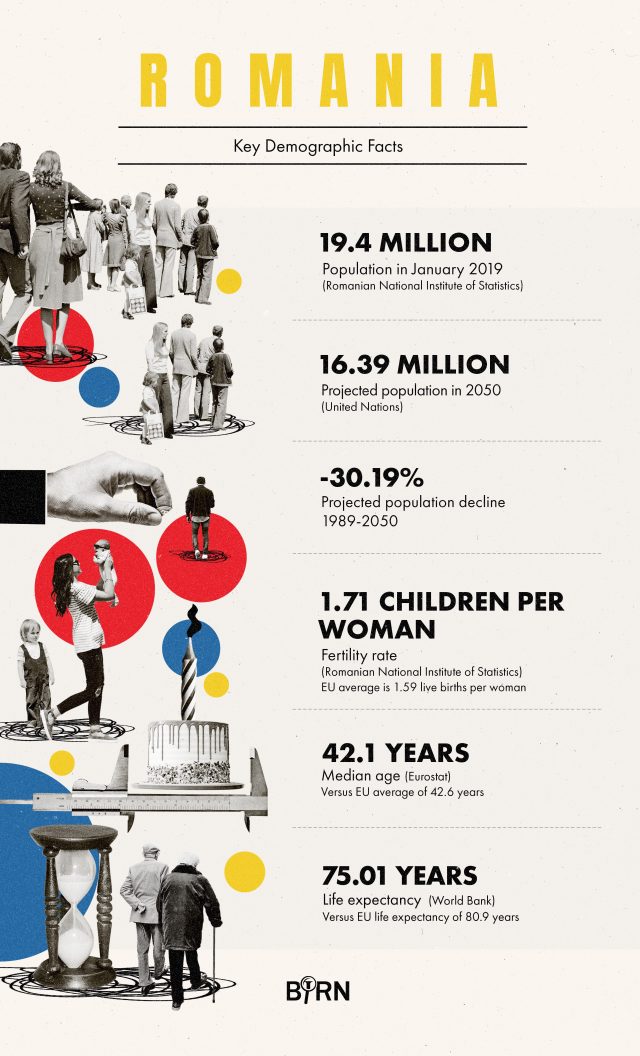 Apart from its low birth rate, emigration is the other main reason for Romania’s shrinking population. Over the past few decades, this has evolved over several distinct phases.

During the Ceausescu era, few Romanians could leave the country, with two distinct exceptions: Jews and ethnic Germans. Large numbers of them were in effect ransomed by Israel and West Germany which, under various guises, bought exit visas for them.

By 1990, there were relatively few Jews left and some 200,000 of the remaining ethnic Germans then left rapidly for Germany.

The second phase lasted from 1990 to 2002. In this period, the economy collapsed and around half of jobs were lost. It was hard for Romanians to get visas to Western countries, though large numbers did manage to get to those countries, even if they were then forced to work illegally.

At the beginning of 2002, the next phase began when visas were abolished for the EU’s border-free Schengen zone. This opened the gates.

Remus Gabriel Anghel, the head of the Centre for Comparative Migration Studies at Babes-Bolyai University in Cluj, believes that from then until 2007-08, some one million to 1.2 million left for Italy while another million went to Spain.

The situation was so dramatic, he says, that virtually whole towns in the hardest-affected regions emptied.

This period came to an end because of the economic crisis that hit Italy and Spain hard and because Romania joined the EU at the beginning of 2007.

Since then, says Anghel, approximately one million have left.

Initially nine of the then 26 EU countries imposed transitional labour restrictions but these have since been lifted.

It is hard to work out precise figures for the numbers abroad, however. The age of cheap travel means that there is a lot of circular migration — for example men going for three months to work in a slaughterhouse in Germany, returning home for a few months and then leaving again, or women going to care for the elderly in Italy for similar short term contracts.

One ongoing issue is that of families where one or both parents are abroad and which can have deep and negative effects on the children left behind.

One ongoing issue is that of families where one or both parents are abroad and which can have deep and negative effects on the children left behind.

In 2016, there were 95,308 children with parents working abroad, some 34 per cent of them with both parents abroad.

Today the situation is changing again. In 2008, people sent back remittances of 6.4 billion euros, representing 4.5 per cent of gross domestic product, but by 2016 that had dropped to 3.2 billion euros or 1.9 per cent of GDP.

According to the World Bank, 20.6 per cent of the country’s working age population was abroad in 2017.

While emigration continues it has stabilised but, at the same time, there is increasing migration within Romania.

In 2007, some two-thirds of business and Romania’s GDP was focused on Bucharest but now that has dropped to 44 per cent, according the Anghel.

“In the meantime, cities like Timisoara, Brasov, Sibiu and Cluj got a lot of investment and began to develop more than before and so what we see is that these cities started to attract population from the east of the country and even from within (richer) Transylvania itself.”

Today, says Anghel, there is a small amount of return migration and immigration, mostly from Moldova, though large numbers of Moldovans only acquire easy-to-get Romanian citizenship so they can work and live elsewhere in the EU.

The government, however, has begun to open the door to workers from elsewhere, such as Vietnam, because of increasing labour shortages and wages are increasing.

Another result of labour shortages is that Roma, previously discriminated against, are finding employment in sectors where it would have been hard for them to get jobs before.

While Romanian governments, just like others in the region, need to plan for a future with fewer but ever older people and find ways of attracting migrants back home, Anghel notes that migration has become “the main process of social change”.

In the past, people left and remittances came back. “People just tried to make ends meet.” Now he says things have changed.

“Romania is no longer a poor country in the way that it was and now people don’t need just money. They have had experience of the West,” he said, adding that they want good schools, hospitals and services.

They have higher expectations than before and “this is something the government does not really understand”.

* Tim Judah is a correspondent for the Economist. He has been working on the subject of demography as a fellow of the Europe’s Futures programme of the Institute for Human Sciences (IWM) and the Erste Foundation in Vienna