One day after China finally snapped, and demonstratively refused to intervene and keep the CNH above 7.00 vs the dollar, escalating the trade war into a currency war, stocks are tumbling and Wall Street analysts – all of whom had been bullish until now – are scrambling to adjust their narrative. 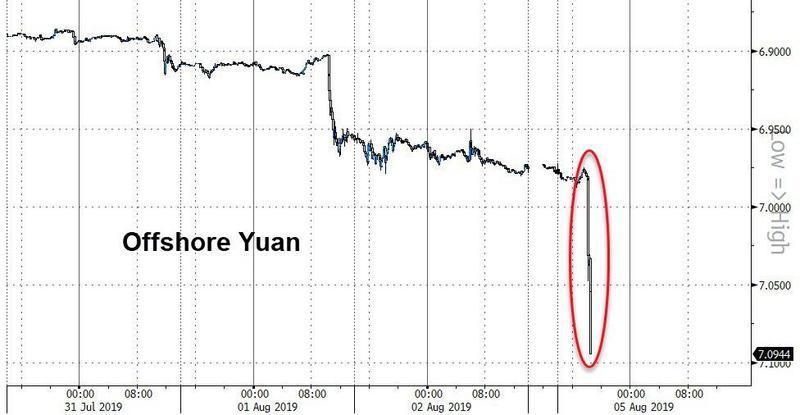 With the S&P dropping more than 2%, bringing its slide from the all time highs just two weeks ago to more than 5%, semiconductors which are most directly exposed to Chinese trade, and banks stocks, which are sensitive to interest rates, are among the hardest hit sectors.

As widely expected, President Trump himself joined the fray and on Monday morning tweeted about China and the Fed saying: “China dropped the price of their currency to an almost a historic low. It’s called ‘currency manipulation.’ Are you listening Federal Reserve? This is a major violation which will greatly weaken China over time!” In doing so, he once again confirmed that he is using trade war as leverage to get Powell to cut rates further, as BofA showed in the following simple schematic: 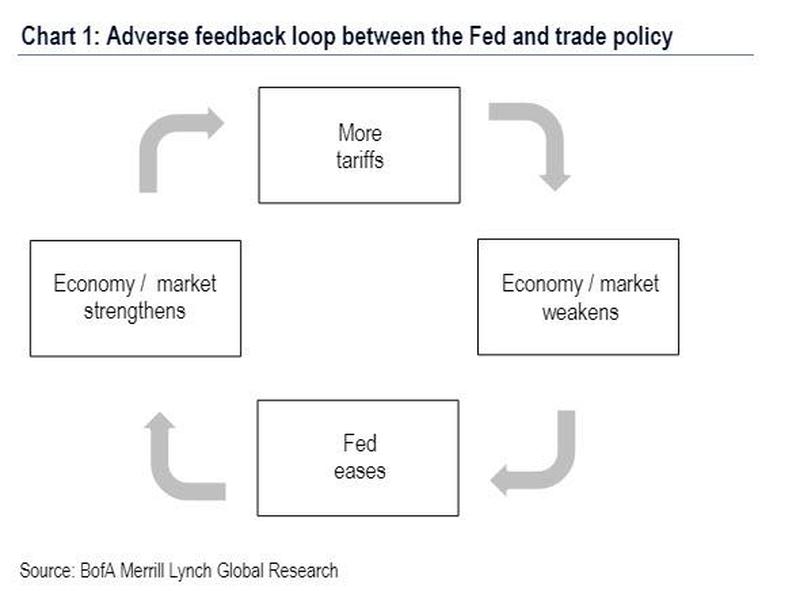 But while Trump’s reaction was expected, what was more interesting is how sellside analysts – until recently predicting that the S&P will enjoy smooth sailing well into the 3,000, are adjusting their trading recos now that the worst case scenario in the trade war with China has materialized. So, courtesy of Bloomberg, here are some samples of the latest sellside commentary:

Read also:
The Media Sabotage of Hydroxychloroquine Use for COVID-19: Doctors Worldwide Protest the Disaster

“While there were measures that could have been chosen with larger direct effects on supply chains, the announcements from Beijing represent a direct shot at the White House and seem designed for maximum political impact,” Krueger said. “ We expect a quick (and possibly intemperate) response from the White House, and consequently expect a more rapid escalation of trade tensions.”

“There now will be increased expectations that the Fed will cut again in September to offset the drag caused by this escalation in the trade war,” he added. “Such moves will only be a partial, lagged offset to the recessionary headwinds a cycle of retaliation would cause.”

“The wait is over for those wondering how Beijing would respond to Trump’s recent tariff announcement. The result: the yuan was allowed to depreciate well beyond 7.0.”

Instructing state-owned Chinese firms to halt U.S. crop purchases triggered “the obligatory flight-to-quality,” which pushed 10-year yields to 1.74%, with two-year yields keeping pace. That was “an impressive move that suggests August will not experience the traditional summer doldrums. Who needs vacation anyway?”

“The most significant unknown at this moment,” Lyngen added, “is how much further the yuan will be allowed to fall given that it’s already the weakest since 2008.”

Graseck didn’t change her NIM assumptions yet. “We bake one additional cut of 25 basis points in 2019 in-line with our economist, and bake in the 10-year at 1.75% by mid 2020,” she wrote. She’ll update NIM and earnings per share estimates “if it looks like these trade tariffs are going through as September approaches.”

“The dynamics of U.S.-China negotiation and macro conditions mean the next round of tariffs will likely be enacted, and investors are likely to behave as if further escalation will follow in 2019 until markets price in impacts,” Zezas wrote. “This supports our core view of weaker growth and skews the Fed dovish.”

Zezas sees incentives for the U.S. to escalate quickly. If the administration “understands the Fed’s trade policy reaction function, then it may also perceive that a more rapid escalation could deliver one or more of three beneficial points ahead of the 2020 election: 1) A quicker, potentially more aggressive Fed stimulus response that could help the economy heading into the election; 2) More time to re-frame the potential economic downside; and 3) A major concession by China (not our base case, but it is, of course, a possibility).”