EU-wide inequality matters. Behind the vote in the United Kingdom to leave the European Union, one of the main drivers of discontent had been immigration, primarily from poorer member states—caused by the huge disparities between wages in the rich northwest and the poor east and southeast.

The figure below shows the development of EU-wide inequality, measured by the S80/S20 income ratio—that of the richest to that of the poorest quintile (fifth) of the population. The different curves represent inequality measured at exchange rates and—to take account of differentials in living costs—purchasing-power parities (PPP), as the EU was enlarging from 25 to (before ‘Brexit’) 28 member states.

The lowest curve shows the (wrongly constructed) official value, a population-weighted average of the national, in-country values. It actually indicates that, on average (!), within-country inequality did not change very much after 2005, increasing only slightly after 2013. 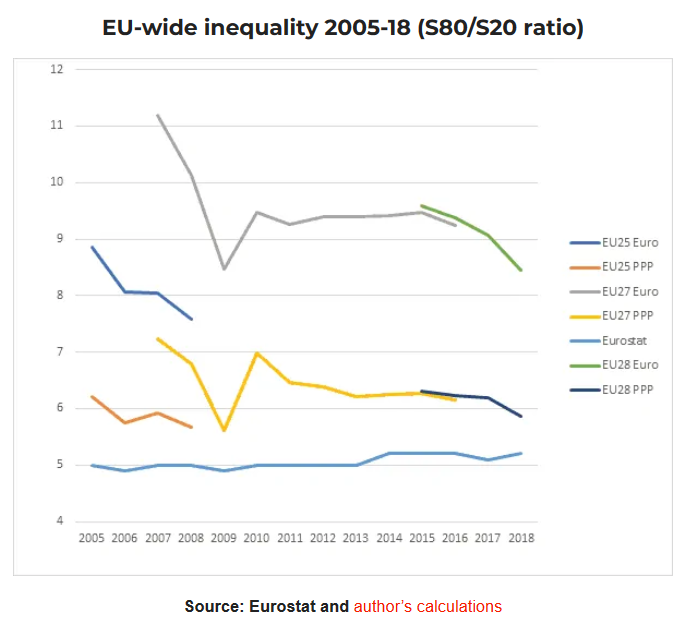 In fact, when measured at PPP EU-wide inequality is at a similar level to the inequality of very unequal member states (such as Romania) and when measured at exchange rates substantially higher. It declined between 2005 and 2007 but jumped with the accession of Romania and Bulgaria (two large poor countries). Afterwards it continued to decrease until 2009 when the crisis affected the global economy. After a short revival, EU-wide inequality has remained almost constant and resumed its decline only in 2017. As the most recent analysis shows, it eventually returned in 2018 to its level of 2009.

Read also:
Ιs the Belgian government in control of its aviation in Syria? Russians accuse.

Inequality within countries varies strongly among member states. The most equal are some central-European countries (the Czech Republic, Slovakia, and Slovenia) and the Nordics. The most unequal are Bulgaria and Romania and some Mediterranean countries.

In most countries, income inequality has increased over recent decades. Between 1980 and 2017, the income shares of the richest decile (tenth) rose in all countries except Belgium. Most of the increase in inequality within countries happened before 2005. Afterwards, this trend continued with some fluctuation (see the lowest curve on the figure).

The development of national inequality is driven by politics (adopting neoliberal labour-market reforms, cutting welfare), system change from socialism to capitalism in central and eastern Europe (CEE), globalisation (increased competition by migrants and low-wage locations), technology (substituting capital for labour), growing regional disparities and some social changes (the rise of single households, ‘assortative mating’ and so on).

Income disparities between the member states and regions have gained importance with the accession of poorer countries: Ireland in 1972, Greece in 1981, Portugal and Spain in 1986 and—by far the biggest challenge—the post-communist countries of CEE after 2004. The income disparities between the poor new member states and the old EU were very high. In 2000, average gross domestic product per capita in CEE was below €10,000 while in the old member states it was above €25,000, when measured at PPP. PPP measurement delivers higher values for GDP in poor countries because prices are lower there—at exchange rates, per capita GDP in CEE turns out to be much lower (often less than €5,000).

Between 2000 and 2008, the eastern periphery grew much faster (almost 130 per cent) than the centre (25.8 per cent) and later continued to do so, albeit no longer that much stronger. Poorer eurozone members (mainly in southern Europe) benefitted after 1998 from declining real interest rates and subsequent debt-driven consumption and investment booms. They succeeded in growing (by 67.5 per cent) faster than the centre until 2008, but then fell back. The decline was absolute between 2008 and 2013, due to the sovereign-debt panic and the disastrous austerity policies imposed by the ‘troika’. Even after 2013, their growth has been weaker than that of the richer member states.

For each of the two dimensions of the EU’s income distribution one can identify and suggest policies to reduce the respective inequality.

Lowering within-state inequality: The large variation of inequality among member states shows that its level is not fixed by global conditions but depends on national policies and institutions. Countries with high inequality should look at those with low levels and try to emulate their approaches if possible and appropriate. Mostly, those policies include a well-managed welfare state and labour-market regulations that reduce the number of precarious jobs. The egalitarian countries of CEE spend relatively little on social protection but achieve low inequality because most of their people are employed in decent work. Other member states (the Scandinavian countries, France, Germany) rely more on redistribution.

Reducing between-country inequality has been the goal of the EU’s cohesion policies. The above EU-average growth which could be observed in many poorer member states is a good start and a necessary condition for achieving cohesion. Policies should aim at accelerating that growth and extending it to all countries.

Unfortunately, the EU’s and, above all, the euro area’s economic policies have long been biased in favour of stability, low debt and competitiveness. They promoted internal devaluation and export orientation rather than domestic demand. That bias has been particularly prominent and harmful in southern Europe since 2008. While the European Central Bank eventually adopted some appropriate policies, fiscal policies have been too restrictive (at least until the coronavirus crisis) and have not compensated for the lack of private investment relative to private savings in the eurozone and the EU.

Read also:
US Trade War with the European Union

More generally, the EU could and should nudge member states to adopt appropriate policies, via the open method of co-ordination, which, up to now, has rather been used to promote ‘supply-side’ policies of labour-market deregulation. The EU could also contribute to lower competitive pressures on national tax systems. Different tax and banking regulations lure the savings of rich people and companies to low-tax locations and allow tax evasion through transfer pricing. The EU should prevent such policies within the union and use its economic weight to fight them elsewhere.