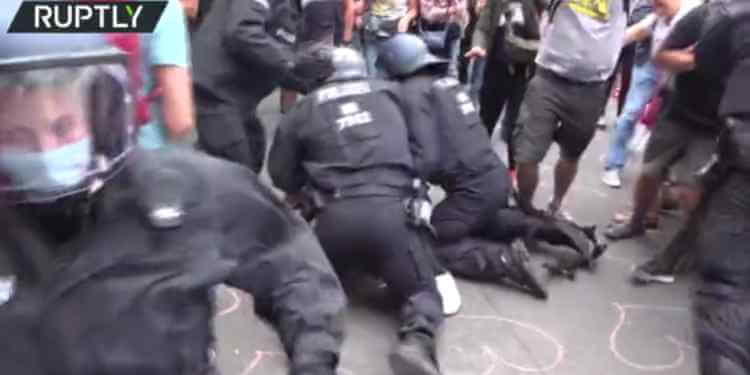 Mayhem on streets of Berlin: Anti-lockdown protests turn into violent scuffles with police in Germany, 600 arrested

Berlin witnessed chaotic scenes and violent brawls on Sunday as riot police sought to forcefully disperse anti-lockdown rallies that had been banned by authorities, after thousands took to the streets of the German capital.

Coronavirus skeptics once again gathered in the center of the German capital despite the fact that the German authorities had banned as many as 16 protests by opponents of Covid-19 restrictions.

Some 5,000 people on Sunday joined several “spontaneous” demonstrations in various parts of the city, according to police estimates. Earlier, the organizers of just one such demonstration, which was eventually banned, said that it might be attended by as many as 22,000 people.

The rally participants were beating drums and chanting slogans such as “Peace, freedom, no dictatorship!” and “We demand the unrestricted restoration of the right to demonstrate.”

In many cases, the unauthorized processions quickly descended into violence as police in full riot gear attempted to block the crowds from marching along the city streets. Some 600 people have been arrested, according to a police spokesman citing preliminary data.

“The strategy is to wake up. The sleepers need to wake up. We are losing our freedom. We just run,” one protester told the German Die Welt daily. Most participants were not wearing face masks and were ignoring the social-distancing rules that are still in place in Germany.

Videos published by RT’s video agency Ruptly as well as footage that has surfaced on social media showed police officers sometimes engaging in brutal fist fights with demonstrators, as well as punching them in the gut and kicking them. On one such occasion, the officers clashed with a group of elderly women.

Another video allegedly showed a police officer hitting a teenage boy in the face as he was lying on the ground.

In the city’s west, a group of protesters “tried to break the police chain and pull colleagues out,” the Berlin police said on Twitter, adding that “irritants, batons and physical violence were used.” The officers also made numerous arrests as the police tried to “filter out” suspected “ringleaders” of the protest. There have been no reports about any demonstrators or police officers seriously injured in the scuffles.

On many occasions, police appeared to be greatly outnumbered by the demonstrators. The officers were virtually unable to stop the dense crowds despite attempts to push people back. Sometimes, such attempts quickly spiraled into intense clashes between law-enforcement officers and protesters.

#Germany🇩🇪:Protest in Berlin, against coronavirus restrictions and urging to "restore people's fundamental rights". Counter-protests by opposing groups are also expected to be held in the city.

Berlin’s police spokeswoman, however, told German media that violence was used only in “individual” cases. Some 2,250 police officers were deployed to the city’s streets as helicopters were hovering over the city. Water cannon were used in several places in Berlin, according to German media.

Various anti-lockdown and anti-vaccination movements, commonly referred to as ‘lateral thinkers,’ (‘querdenken’) in Germany have been active there throughout the pandemic. They demand an end to the restrictions imposed by the government to combat the virus, and are skeptical about vaccination.

Their protests are usually banned by authorities, who point to the fact that such demonstrators refuse to abide by the existing rules for demonstrations. The latest unauthorized protests sparked an angry reaction from Wolfgang Schaeuble, president of the German parliament’s Lower House, the Bundestag

Read also:
Maria Negreponti Delivanis*:”Greece must convince the world that it has the right to immediately cancel its debt”

“If almost all experts around the world say that [Covid-19] is dangerous and vaccination helps, then who actually has the right to say: But I am smarter? For me that is an almost unbearable degree of arrogance,” Schaeuble told German newspaper NOZ.

“Please take a look at the scientific findings, don’t let cheap slogans fool you!” he added.