Legislative elections are scheduled to take place on 11 and 18 June (with different dates for voters overseas) to elect the 577 members of the 15th National Assembly of the French Fifth Republic.

The legislative elections will follow the two-round presidential election in which Emmanuel Macron of En Marche! won the runoff against Marine Le Pen of the National Front (FN) on 7 May after the elimination of François Fillon of the Republicans (LR), Jean-Luc Mélenchon of la France insoumise (FI), and Benoît Hamon of the Socialist Party (PS) in the first round on 23 April. 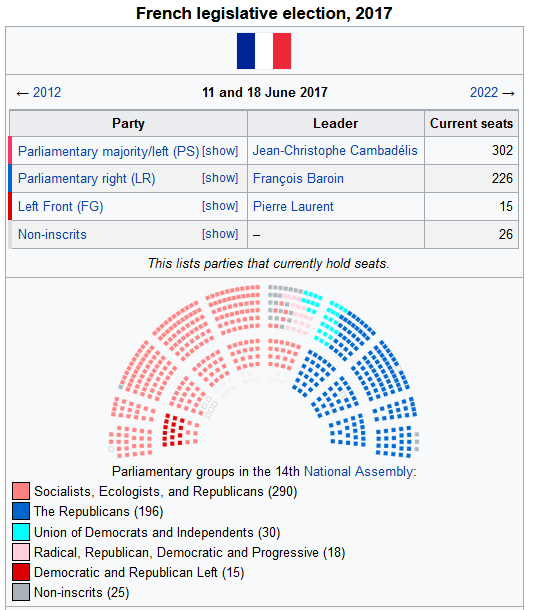 The legislative election will take place about a month after the second round of the presidential election on 7 May. In the first round on 23 April, Emmanuel Macron of En Marche! and Marine Le Pen of the National Front (FN) advanced to the runoff after placing first and second, respectively, and were followed close behind by François Fillon of the Republicans (LR) and Jean-Luc Mélenchon of la France insoumise (FI), with Benoît Hamon of the Socialist Party (PS) trailing far behind.[1] Macron subsequently won the second round.

Since 2002, presidential and legislative elections have occurred in the same year to avert the risk of cohabitation.[2]

In the first round of the presidential election, Macron arrived first within the borders of 240 constituencies, against 216 for Le Pen, 67 for Mélenchon, 54 for Fillon, and 0 for Hamon.[3]

The 577 members of the National Assembly are elected using a two-round first-past-the-post system in single-member constituencies. Candidates for the legislative elections will have five days, from Monday 15 May to 18:00 on Friday 19 May, to declare and register their candidacy.[4][2]

To be elected in the first round, a candidate is required to secure an absolute majority of votes cast (i.e., excluding null and blank votes) with the number of votes secured equivalent to at least a quarter of registered voters. Should none of the candidates satisfy these conditions, a second round is organized in which only first-round candidates with the support of at least 12.5% of registered voters are permitted to contest. Should this condition be met by no or only one candidate, the two candidates with the highest number of votes in the first round may continue to the second round. In the second round, the candidate with a relative majority is elected. Of the 577 constituencies, 539 are in metropolitan France, 27 are in overseas departments and territories and 11 are for French citizens living abroad.[2]

Read also:
From Capital to the Capitol

Voting in the second round takes place on Saturday 17 June from 08:00 to 18:00 (local time) in the French overseas departments and territories situated east of the International Date Line and west of metropolitan France (i.e. French Guiana, French Polynesia, Guadeloupe, Martinique, Saint Barthélemy, Saint Martin and Saint Pierre and Miquelon), as well as at French diplomatic missions in the Americas. Voting in metropolitan France (as well as the French overseas departments and territories of Mayotte, New Caledonia, Réunion and Wallis and Futuna, and French diplomatic missions outside the Americas) takes place from 08:00 to 18:00 or 20:00 (local time) on Sunday 18 June.[5][6]

Lutte Ouvrière (Workers’ Struggle; abbreviated as LO) will present candidates in 553 constituencies, with 539 in metropolitan France, six in Réunion, four in Martinique, and four in Guadeloupe.[7]

The New Anticapitalist Party (NPA) will likely not present candidates in the legislative elections due to the potentially high cost for the party, as campaign expenses are reimbursed only if a party’s candidates attain 1% in at least 50 constituencies.[8]

La France insoumise, the political movement launched by Jean-Luc Mélenchon, former co-president of the Left Party (PG) who ran as a presidential candidate in both 2012 and 2017, intends to run candidates in all 577 constituencies,[9] including in some held or contested by members of the French Communist Party (PCF). Relations remained tense between the two, however, and in early May la France insoumise proposed that the groupings withdraw competing candidacies in 26 constituencies.[10]

In exchange for the withdrawal of ecologist candidate Yannick Jadot in the presidential election in favor of Socialist candidate Benoît Hamon in February, the PS agreed to reserve 42 constituencies for the EELV (including all those of its outgoing deputies), and the accord was formally approved by EELV on 19 April. The agreement also provides that the EELV will not present candidates in 53 constituencies. The investiture of former housing minister Cécile Duflot was maintained despite the opposition of mayor of Paris Anne Hidalgo, as was that of Sergio Coronado, who supported Jean-Luc Mélenchon in the presidential election; however, he will nevertheless face a Socialist candidate in the legislative elections. Many of the remaining constituencies are those of Socialist deputies who backed Emmanuel Macron in the presidential election.[13]

The first wave of 395 Socialist candidates for the legislative elections was invested on 17 December 2016, including a number who supported of the candidacy of Emmanuel Macron in the presidential election, such as Alain Calmette in Cantal’s 1st, Olivier Véran in Isère’s 1st, Jean-Louis Touraine in Rhône’s 3rd, Corinne Erhel in Côtes-d’Armor’s 5th, Richard Ferrand in Finistère’s 6th, Jean-Jacques Bridey in Val-de-Marne’s 7th, Stéphane Travert in Manche’s 3rd, and Christophe Castaner in Alpes-de-Haute-Provence’s 2nd constituency.[14]

En Marche!, the movement founded by president-elect Emmanuel Macron, plans to run candidates in all 577 constituencies, of which at least half are planned to be from civil society – the other half having previously held political office – and half women. No “double investiture” will be permitted, though the original requirement of prospective candidates to leave their previous political party was waived by Macron on 5 May.[15] In addition to those parameters, he specified in his initial press conference on 19 January that he would require that candidates demonstrate “probity” (disqualifying any prospective candidates with a criminal record), “political plurality” (representing the threads of the movement), and “efficacy”. Those wishing to seek the investiture of En Marche! were required to sign up online,[16] and the movement nearly 15,000 applications. For nominations sought by those in the political world, the popularity, establishment, and ability to appear in the media of applicants are also considered, with the most difficult cases adjudicated by Macron himself. To represent themselves under the label of En Marche!, however, outgoing deputies must decide to leave the Socialist Party (PS) or the Republicans (LR).[17]

Read also:
The Vocation to Contest the Hegemon

After François Bayrou endorsed Macron in February, the Democratic Movement (MoDem), which he leads, reserved reserved 90 constituencies for MoDem candidates (running under the label of En Marche!), of which 50 were considered winnable.[18] After his victory in the presidential election, Macron resigned his post as president of En Marche!, with Catherine Barbaroux appointed as interim president. The movement, renamed, will present candidates under the label of “La République En Marche!” (REM), and the full list of 577 investitures will be published on 11 May.[15]

The Republicans (LR) and allies

On 2 May, François Baroin was appointed by the political bureau of the Republicans (LR) to head the campaign for the legislative elections. A week before, he said that he would be available to serve as Prime Minister in a cohabitation government under Emmanuel Macron and considered it impossible not to run on the same program as François Fillon, who was eliminated in the first round of the presidential election, in the legislative elections.[19]

On 7 March, the executive bureau of the Union of Democrats and Independents (UDI) approved an accord with the Republicans reserving them 96 constituencies, including the 28 seats currently held by outgoing deputies, and preparing primaries in 42 constituencies between UDI and LR candidates.[20]

The National Front ended in December 2016 its pre-investitures for the legislative elections. The average age of the candidates is 47 years, with near-gender parity and almost 80% of candidates already having a local mandate (i.e., within a municipal, departmental, or regional council), compared to a rate of barely 10% in 2012.[22]