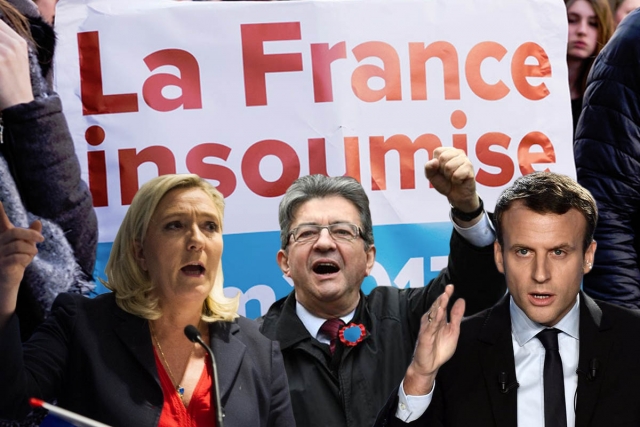 With under a month to go before the first round of France’s presidential elections, there is still all to play for, with almost half of French voters still undecided. Arguably the most significant feature of the contest so far has been the almost complete collapse of the traditional parties. The incumbent president, Francois Hollande hasn’t even bothered to stand, so loathed is he by the public. His Socialist Party’s last hope, the “radical” Benoit Hamon, now languishes in fifth place according to recent polls.That the discredited Socialist Party is facing humiliation should not come as a surprise; its present plight was foretold by Hollande’s false promises and austerity policies. What is more startling for the ruling class is the very real possibility that the traditional party of the right, Les Republicains (formerly the UMP), may not even make it into the second round of voting either.The Republican candidate, Francois Fillon, presented himself as a “sleaze-free,” Catholic conservative in order to coax voters away from Le Pen’s Front National. Unfortunately, he also paid his wife €500,000 a year out of state funds for a job which didn’t exist; a fact which, following its exposure in the media, has somewhat undermined his position.

With its two traditional parties incapacitated, the French Establishment must now rely on Emmanuel Macron, a liberal, pro-European former banker who served as Minister for the Economy under Hollande’s government. He currently leads in the opinion polls.

Macron, in his own words, stands for a “profound democratic revolution” to regain trust in politics, but his programme speaks differently: public spending cuts; lower taxes; sanctions on the unemployed – in short, austerity.

Read also:
Post-Summit, Putin Says Image of Biden Drawn by Media Has Nothing to Do With Reality

It is for this reason that Macron has gained the support of leading Establishment figures in French politics, including none other than Manuel Valls, the former Prime Minister and prospective Socialist Party presidential candidate, who has openly called for a vote for the liberal Macron over the “Socialist” Hamon.

Le Pen, with her talk of protecting French workers may yet still make considerable hay out of this quintessential programme of the “globalist elite”. A lot can happen in a few weeks and no one is sure if the inexperienced Macron will be able to handle the pressure. The final result is by no means certain.

Storm clouds on the horizon

Looking beyond the election itself, the Macron v Le Pen scenario only throws up more problems for the French ruling class. If Le Pen wins, she will hold a referendum on EU membership which could prove disastrous for French and European capitalism. This is why so much of the Establishment and the media have thrown their weight behind Macron.

Macron, however, has no party and no MPs, so President Macron would have to rely on the Socialists and Republicans in order to carry out a harsh, Brussels-backed austerity programme: a finished recipe for further instability, anger and polarisation, both to the right and the left. The “lesser evil” would in reality be a jump out of the frying pan and into the fire.

Mélenchon and his France Insoumise (Rebellious France) movement has seen an encouraging rise in popularity after his performance on the first televised presidential debate. A fifth of viewers, polled minutes after the debate had ended, said that Mélenchon had been the most convincing candidate, ahead of Le Pen and second only to Macron, who has enjoyed almost total support from the French media, unlike Mélenchon.

Read also:
Poland's communists call for international support and an end to persecution

In addition to his improving position in the polls, Mélenchon’s rallies have attracted hundreds of thousands all over the country. His message, of a left-wing alternative to both austerity and the nationalist right has clearly gained an echo. As one journalist put it, “his position as a candidate at war with the political system is paying off.”

As the campaign goes on, more left-wing Socialist voters may well switch from Hamon to Mélenchon, while the Fillon campaign will continue to lose votes to both the liberal Macron, and the nationalist Le Pen. In such a situation, it is even possible, albeit unlikely, that Mélenchon could make it to the second round.

Regardless of the result, this campaign represents an historic opportunity to galvanise the forces of the Left and pose a genuine alternative to the reactionary policies of both Le Pen and Macron. If, post-election, Mélenchon is able to transform his campaign into a vast political movement, organised around a socialist programme to transform society, the result will be an important step forward, not only for the workers of France but all of Europe.