Facebook has blocked users from sharing a social media video promoting the January 16 online meeting “Organizing resistance to Internet censorship,” featuring World Socialist Web Site International Editorial Board Chairman David North and Pulitzer Prize-winning journalist Chris Hedges. The initial post of the video, uploaded Friday, cannot be shared by any user. Those who attempt to do so receive an error message that seems to imply a technical failure.

The message which appears when users attempt to share the video promoting the January 16 meeting
Users reported, however, that upon clicking “If you think you’re seeing this message by mistake, please let us know,” they were presented with a notice that clearly indicates the content had been blocked in the name of keeping Facebook “safe.” 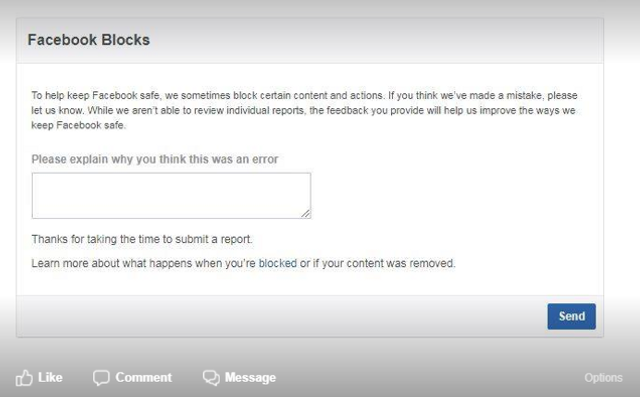 A repost of the video, submitted on Sunday, is shareable, underscoring the arbitrariness of Facebook’s censorship measures.

The blocking of the video took place one day after Facebook blocked another WSWS video from being shared, indicating what is likely an acceleration of its politically motivated censorship.

In another incident Saturday, Facebook blocked an attempt by the WSWS to purchase an advertisement to promote the Perspective column “Facebook announces major plan to censor news content.” The reason given by Facebook for denying the ad was: “We don’t allow ads that use images of Mark Zuckerberg when promoting a product or service.”

These actions come just days after Facebook announced a new Newsfeed protocol that will deprioritize public posts and articles by organizations, while promoting “personal moments.” Under the new regime, the purchase of advertisements will be the only way that news and political organizations can gain substantial exposure for their content. This means that any public content critical of the actions of Facebook CEO Mark Zuckerberg will be effectively banned from distribution on Facebook.

It is clear that the Facebook censorship experienced by the WSWS is part of the company’s accelerating moves to censor political speech on the Internet. Under these conditions, Tuesday’s online meeting “Organizing Resistance to Internet Censorship,” which will be held at 7 PM Eastern Standard Time at endcensorship.org, is of critical importance.

A year after the anti-Muslim pogrom in Delhi, justice remains elusive...

Greece. The Koufontinas affair shakes the rule of law

‘No one cares if we die’: Ex-Syrian rebels recount Nagorno-Karabakh nightmare...