Turkey Suspends All US Operations Against ISIS At Incirlik Airbase, Which Vaults B61 Nuclear Bombs

Following the failed Turkish coup, U.S. military operations out of Turkey’s giant Incirlik Air Base – critical in the ongoing campaign against ISIS – came to a halt Saturday afternoon as the Turkish military closed the airspace around the base and suspended all US-led operations, mostly targeting the Islamic State.

A statement posted by the US embassy in Turkey said that local authorities are denying movements on to and off of Incirlik Air Base adding that the power there has also been cut.

Be advised that local authorities are denying movements on to and off of Incirlik Air Base. The power there has also been cut. Please avoid the air base until normal operations have been restored.

In addition, the Adana airport has re-opened but flights to and from Istanbul and Ankara remain suspended. Please check the website of your airline for up to date flight information before going to the airport.

This was confirmed moments ago by ABC’s Jon Williams: 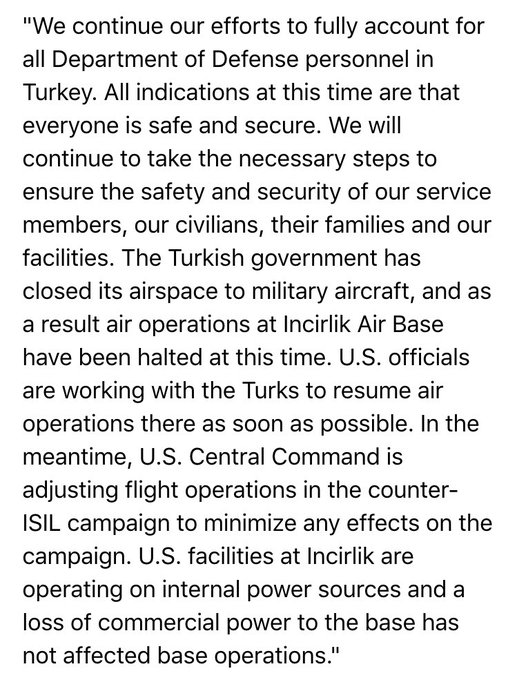 The Pentagon’s press secretary, Peter Cook, said Saturday that U.S. officials are working with Turkish officials to get permission to resume air operations as soon as possible following the attempted coup. The U.S. has been flying Air Force A-10 attack planes from Incirlik base as part of its air campaign against the Islamic State. Cook says U.S. Central Command is adjusting flight operations in the anti-IS campaign to minimize the effect of the closure of Turkish airspace. Cook also confirmed that Incirlik lost commercial electrical power.

The also NYT added that Turkish authorities’ suspension of American-led strike missions against the Islamic State was “the first major impact of the coup on the broader allied campaign against the group.”

“At this time, Turkish authorities are not permitting aircraft to depart Incirlik,” an American military official said on Saturday morning.

The American official said the United States was seeking an explanation for the decision and other details.As the NYT adds, the move may reflect a desire by Turkey to control its airspace for a time today, as opposed to any shift on its policy toward ISIS, although that remains to be seen especially with Kerry and Lavrov concluding their agreement on how to extend the “long-term ceasefire” in Syria.

Pentagon officials had said late Friday that the unfolding coup had not affected the bombing and surveillance missions from Incirlik, the opening of which to the allies has enabled commanders to accelerate and intensify airstrikes against Islamic State targets in Iraq and Syria.

President Obama planned to convene a meeting Saturday morning with his national security and foreign policy team about Turkey.

Unconfirmed media reports have since reported that the airspace has been reopened, but there was no update on the status.

Some have speculated that the airbase may be held “hostage” by Ankara as a bargaining chip ahead of demands for the extradition of Erdogan’s arch enemy, Fethullah Gulen, currently a resident of the state of Pennsylvania.

Read also:
President al-Assad to RT: Russia’s power today constitutes a restoration of an international equilibrium… Syria would resist any Turkish invasion of its lands

For now, the situation remains in flux.