Turkey’s vice president condemned Turkish-Cypriot leader Mustafa Akinci for having criticized the operation in Syria. In a post on his Facebook account Akinci wrote “we call it Operation Peace Spring, yet it is not spilled water, but blood.” Akinci’s posted triggered an outrage in Turkey.

“I condemn [Mustafa] Akinci who ignores the fact that Operation Peace Spring is taking place against the bloody terrorist organization PKK/PYD for the stability of region,” said Vice President Fuat Oktay on Twitter on Sunday.

Oktay said Akinci’s “unfortunate remarks” do not reflect the opinion of Turkish Cypriots.

In a lengthy post on his Facebook account on Saturday evneing, Akinci wrote among others “despite the fact that we call the operation Peace Spring, it is blood spilled, not water.” 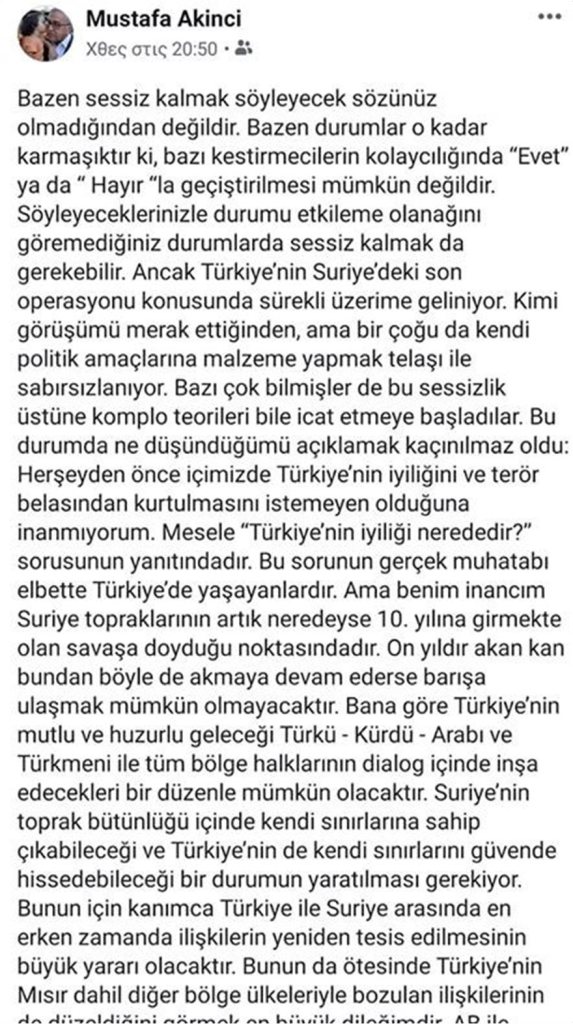 “Sometimes being silent is not because you have no words to say. Sometimes things are so complicated that it is impossible to say ‘yes’ or ‘no’. If you cannot see the opportunity to influence the situation with what you say, you may also need to remain silent. ”

“We must create a situation where Syria can take care of its own borders and Turkey can feel safe. That is why I believe it would be of great benefit to look again at relations between Turkey and Syria. Beyond that, it is my greatest desire to see Turkey’s relations with other countries in the region, including Egypt. Working with the EU, a Turkey that will be better for everyone. ”

Read also:
Farange on Internet politics and the Dutch referendum

“When I was 27 years old in 1974, I served like any young Turk in the Turkish military movement, caused by the fascist Greek language. My friends witnessed my side fighting in Nicosia like many of us, I knew what war meant. Although we then called it the “Peace Operation”, it was a bloodbath. And now, even though we call it “Peaceful Spring” it’s not spilled water, but blood. That is why my biggest wish is for dialogue and diplomacy to start as soon as possible, ” Akinci wrote

PS I hope, Akinci will not be prosecuted by Erdogan for “supporting terrorism.”