Former finance minister and founder of MeRA25, Yanis Varoufakis, is considering to upload on internet his secret recordings from the Eurogroup meetings while he was negotiating for Greece in the first half of 2015.

“I’m thinking of uploading the recordings to the internet. After all, I was the only one who respected privacy, everyone else leaked. It would be good for Europe’s historical archive, ” Varoufakis said, speaking on to protothema FM.

“Everybody is recording the meetings and they have to do it,” the former finance minister added.

The issue of Varoufakis’ recordings revived after Kostas Gavras, the director of “Adults in the Room” told media that he has heard the recordings for the film purpose.

“They talk for hours and repeat the same thing. it’s strange that these people talk only about economics and money and banks and there is no presence of people. Just graphic, but not people. numbers but no people. Behind everything people are hiding and are being influenced, but it was exciting to see the people’s absence from all this. I’ve been to Greece these years, I read, I see, I know how much people suffer. Therefore, this was the first very negative feeling for the whole story and the Eurogroup,” Gavras said in an interview with oneman.gr.

With regards to the film “Adults in the Room”, Varoufakis revealed that he had objections about the way his book was presented. ” A book can be transferred in infinite ways. The more I love a movie, the more I fight with it.”

At the same time, he described the “ridiculous” the criticism as of why Kostas Gavras made his book a movie. “They should be ashamed” Veroufakis said adding that “Gavras has no obligation to answer why he made the film, let’s all be serious.” 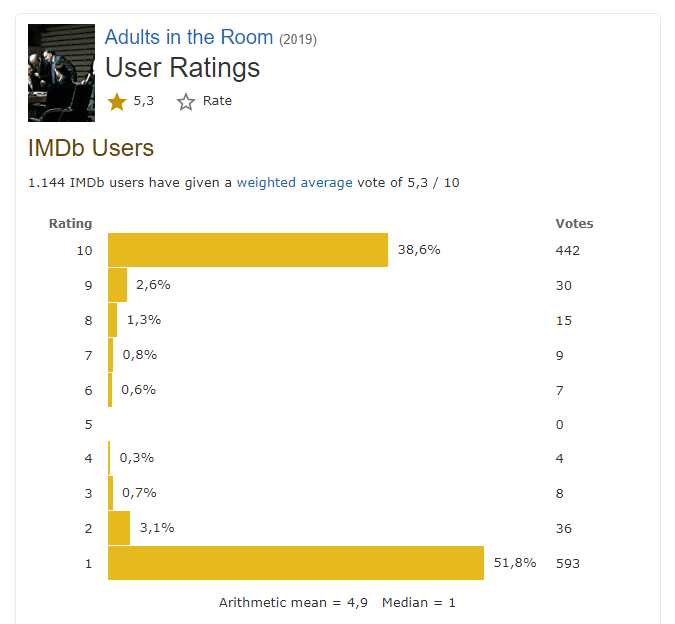 It is worth noting that a storm of negative comments flooded the online data base for films and television series IMDb. A warning was posted to clear the issue.

How ould people rate a film that they never saw?

“Adults in The Room” has been presented only at the Venice Festival last week, it will have its Grand premier in Greece on September 28. It will be in Greek movie theaters as of October 3.

PS apparently so far, critics saw only the trailer and created an opinion about the film. But most probably they were simply annoyed by the fact, famous political director Gavras turned the book by a politician majority of Greeks and European technocrats blame for the “destruction of Greece in 2015.”

As we say in Greek … “ξίδι” – “vinegar” to mock somebody who is angry. Ancient Greeks believed that the sour Ph of vinegar would lower blood pressure and help one calm down physically and psychologically