Last week, a stunning new study was published in the New England Journal of Medicine by a team of Harvard scientists, who estimate that the true death toll from Hurricane María in Puerto Rico may be as high as 5,000. The report is a powerful blow to the lies of both the local and federal governments, which to this day officially acknowledge just 64 deaths.

The study is a damning exposure of one of the most monstrous cover-ups in US history. Eight months after the storm, the independent study by Harvard researchers provides the only comprehensive scientific assessment of the death toll from the hurricane and the grossly under-funded and incompetent recovery effort. It is the first and only study to use data collected from on-the-ground research and is undoubtedly the most accurate to date.

Despite the highly significant findings, the report has been virtually ignored by US cable news networks and online and print media outlets.

From Tuesday when the study was released until midday Wednesday, the three main cable news networks—Fox News, CNN and MSNBC—gave the Harvard study a combined total of just over 30 minutes of coverage. On Fox, the findings were given only 48 seconds of air time.

The report was released the same day that ABC television abruptly cancelled  the revived Roseanne television series after its star, Roseanne Barr, posted a racist tweet. The watchdog group Media Matters calculated that cable news networks covered Roseanne Barr’s tweet and her show’s cancellation 16 times as much as the deaths of thousands of US citizens in Puerto Rico.

The Harvard report was buried or ignored by the major newspapers. On Wednesday, the New York Times ran a single article on the study on page 13 of its print edition. There were no commentaries on the massive death toll on that day’s editorial or op-ed pages. By Thursday, the report had vanished from the Times’ print edition, while the Roseanne Barr story appeared on the front page and two full inside pages. USA Today had nothing at all on the Harvard study in its print edition. 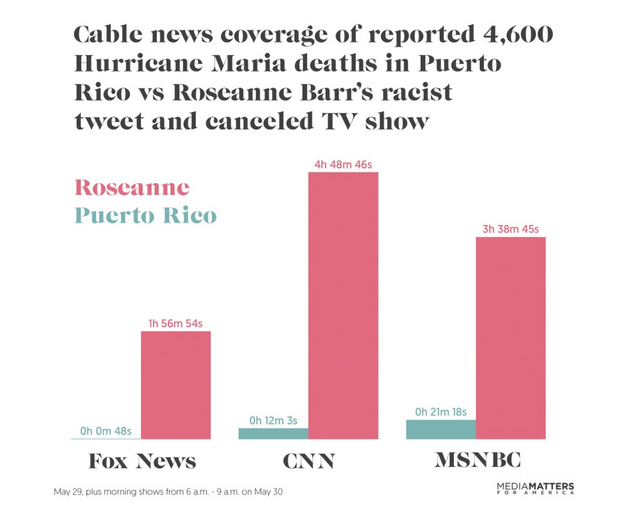 The media’s downplaying of the deaths of 5,000 people cannot be explained as a mere oversight. These multi-billion-dollar media giants have the resources and staff to cover virtually any story in any corner of the globe.

Hundreds of journalists were dispatched to cover the royal wedding in England just 10 days before the publication of the Harvard study. The same week that they all but ignored the news of thousands of deaths on US territory, the television broadcast and cable news programs devoted hours of coverage to a series of storms that caused a tiny fraction of the death and destruction caused by Hurricane Maria, in some cases making them the lead item on the evening news.

The downplaying of the Harvard study by the corporate media stems in large part from the fact that it exposes not only the criminal role played by the local and federal government, but also the complicity of the media. The Harvard study exposed the cover-up of not only the scale of devastation and suffering from the hurricane, but also the conditions of mass poverty and collapsed infrastructure on the island and the lack of preparation by the government for a serious storm.

Any serious examination of the situation in Puerto Rico would require the consideration of a host of social crimes that all point to the US corporate-financial oligarchy: a century of US imperialism, financial scheming and looting of public assets, decades of austerity, the denial of basic democratic rights, among other issues.

The staggering death toll revealed by the Harvard study raises a whole set of questions the media does not want raised:

* What was the true nature of the recovery effort?

* What were the conditions on the ground in Puerto Rico before the storm that led to such devastation?

* Why was the scope of the crisis on the island so systematically concealed from the general public?

In fact, the corporate media began downplaying the crisis soon after the hurricane struck Puerto Rico last September. The first Sunday after the storm, the five major political talk shows taken together dedicated less than one minute to the devastation from the storm and three out of the five shows didn’t mention Puerto Rico at all. At this time the entire island of Puerto Rico was without power and millions did not have access to clean water or medical care. Of the cable news networks that covered Hurricane Maria, the BBC initially mentioned Hurricane Maria on air more than the US networks.

The attention given to Hurricane María was low even in comparison to that given similar hurricane disasters in the US last year. Data from the Media Cloud project at the MIT Media Lab shows that US media outlets ran 6,591 stories online about Hurricane María in Puerto Rico from September 9 through October 10. By comparison, for the equivalent periods, news outlets published 19,214 stories online about Hurricane Harvey in Houston and 17,338 on Irma in the Caribbean, including part of Puerto Rico and Florida.

Statistics from Media Matters show that overall coverage of the crisis sharply declined after President Donald Trump visited the US territory on October 3. It was during this trip that the President took the lead in denying the humanitarian crisis, claiming that what happened in Puerto Rico was not a “real crisis” like Hurricane Katrina in 2005 because supposedly only 16 had died from the storm in Puerto Rico. A Media Matters study found that prime time cable news coverage of Puerto Rico’s recovery plummeted after Trump’s visit to the island. 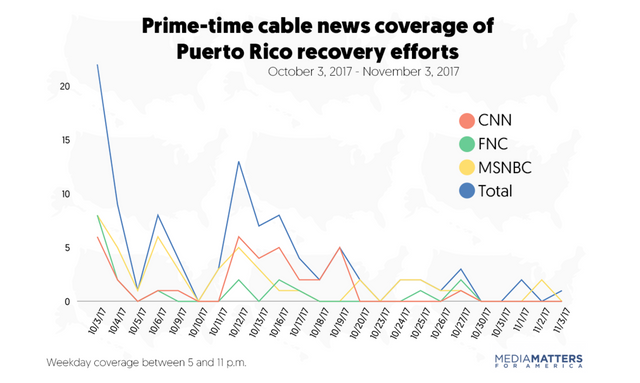 While thousands were dying from lack of basic medical care, the mainstream media was consumed by other matters, in particular the Democratic Party-led anti-Russian witch hunt and the anti-democratic #MeToo campaign.

The corporate-controlled media had no interest in reporting the real situation in Puerto Rico for two related reasons: first, the American financial oligarchy which it serves did not want to spend the money needed to provide essential services and save the lives of workers and poor people; and, second, it was consumed with a different priority—obtaining passage of the multi-trillion-dollar Trump tax cut for corporations and the rich.

The glossing over of the Harvard study by the major news outlets is consistent with the media’s treatment of all of the social crimes against the working class, from Hurricane Katrina in New Orleans to the BP oil spill to the Grenfell Tower fire in London.

One cannot help but note the parallels to the crisis in Flint, Michigan, where coverage of the poisoning of the water supply of an entire city was abruptly dropped after a visit by President Barack Obama. In Obama’s own version of Trump’s throwing paper towel rolls into a crowd in hurricane devastated Puerto Rico, Obama sipped a glass of Flint water on camera and dismissed the effects of lead poisoning on children, declaring that “we all ate some paint chips as kids.”