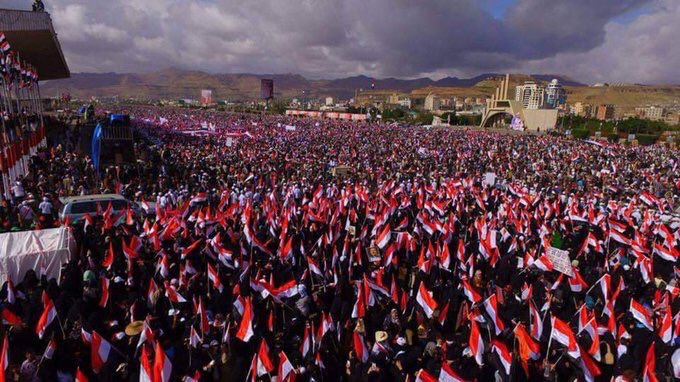 The picture shows yesterday’s (26/3/2017) rally in Sanaa,Yemen where up to 1 million people were condemning the war Saudi Arabia, the United Arab Emirates, the UK and the U.S. have been waging on them for two years.

Nether the New York Times nor the Washington Post reported of the million strong rally. Both though reported widely of a 8,000 strong demonstration in Moscow led by the ultra-nationalist anti-semitic racist Alexey Navalny (vid). Navalny, who polls less than 1% in Russia, is their great and groundless hope to replace the Russian President Putin.

The war on Yemen was launched to show the manliness of the Saudi princes. Well, that may not be the proclaimed reason but it is the only one that makes sense. The U.S. takes part in the war because … well – no one knows:

The morning after that NSC news release was posted on the White House webpage two years ago, Gen. Lloyd J. Austin, commander of the U.S. Central Command, was asked about the objectives of the U.S. support. His stunning reply remains the most accurate characterization from a U.S. official: “I don’t currently know the specific goals and objectives of the Saudi campaign, and I would have to know that to be able to assess the likelihood of success.” Other than dropping weapons with an unconscionable lack of discrimination and proportionality, it appears there are no clear goals and objectives to this day.

The Saudis claim their coalition has dropped 90,000 bombs during the two year war. That are 123 bombs per day. 5 each and every hour for no good reason. It hasn’t helped them at all. The Houthi/Saleh alliance the Saudis fight claims (vid) to have destroyed 176 AFVs, 643 MRAPs, 147 MBTs, 12 Apaches, 20 drones, 4 aircraft. Additionally 109 tactical ballistic missiles were fired. Many of those (certainly exaggerated) Houth/Saleh successes happened on Saudi ground. Its southern desert does not protect Saudi Arabia, it opens it up to attacks.

The U.S. provides planing, intelligence, air-refueling and the ammunition for the Saudi bombing. Without U.S. support this war would not happen at all!

The United Nation claims that the death toll of the war is a mere 5,000. Others speak of 7-8,000. These numbers are laughable. One Saudi attack alone, a “double tap” on a Sanaa funeral hall, killed more than 800. The real death toll of the war is by now likely beyond 100,000. Especially in north-west Yemen, along the Saudi border, each and every Yemeni town and city has been bombed into ruins. Where are the people who once lived there?

The Saudis have simply threatened the UN that they will stop to provide any money for any of its relief efforts should it it make any noise. The UN folded.

Yemen is starving. Even before the war 90% of Yemen’s staple food was imported. The Saudis have since bombed each and every food production facility, chicken farm and port. All larger bridges have been cut. There is no longer any way to import food into the capital Sanaa and the other areas the Saudis besiege. Too small official relief efforts are still running through the Hodeida port on the western coast. The port itself is controlled by the Houthi/Saudi alliance the Saudi want to eliminate. But the port is blockaded from the water side. The Saudis navy and airforce destroys all ship who try to enter or leave it. Some official relief ships are allowed to pass but they have difficulties to unload. All large cranes in the harbor have been destroyed by air attacks.

Still – to deliberately starve off all of the 17 million Yemenis who are “food insecure”, i.e. extremely hungry and nearly starved, the port needs to be closed down for good. That is why the UAE and the Saudi plan to invade, conquer and occupy it. The fighting about the port will be a good excuse to close it down for good until no one in Sanaa is left alive.

The Pentagon is now requesting a free hand to help the Saudis to conquer and occupy the Hodeida harbor. Why the U.S. would do this? Well – the reason is at least as good as the one given two years ago:

[I]f decisions are not made soon, the senior administration official said, “we’re afraid the situation” in Yemen may escalate, “and our partners may take action regardless. And we won’t have visibility, and we won’t be in a position to understand what it does to our counterterrorism operations.”

So if the U.S. does not “help” (i.e. organizes) to close down the last source of food for the millions besieged by the Saudis then it may not be able to understand what that means.

Now there is a really good reason to put boots on the ground! “Unless we do it, we will not know the consequences and that is something we would want to know, right?”