In 1945, most French people thought that the Soviet Union deserved the most credit for Nazi Germany’s defeat in World War II — even though the Soviets didn’t play much of a role in France’s liberation, relative to the US and Britain. By 1995 and 2004, however, the French had changed their minds, and were crediting the US as the biggest contributor to victory in Europe (survey data from the French Institute of Public Opinion Ifop) : 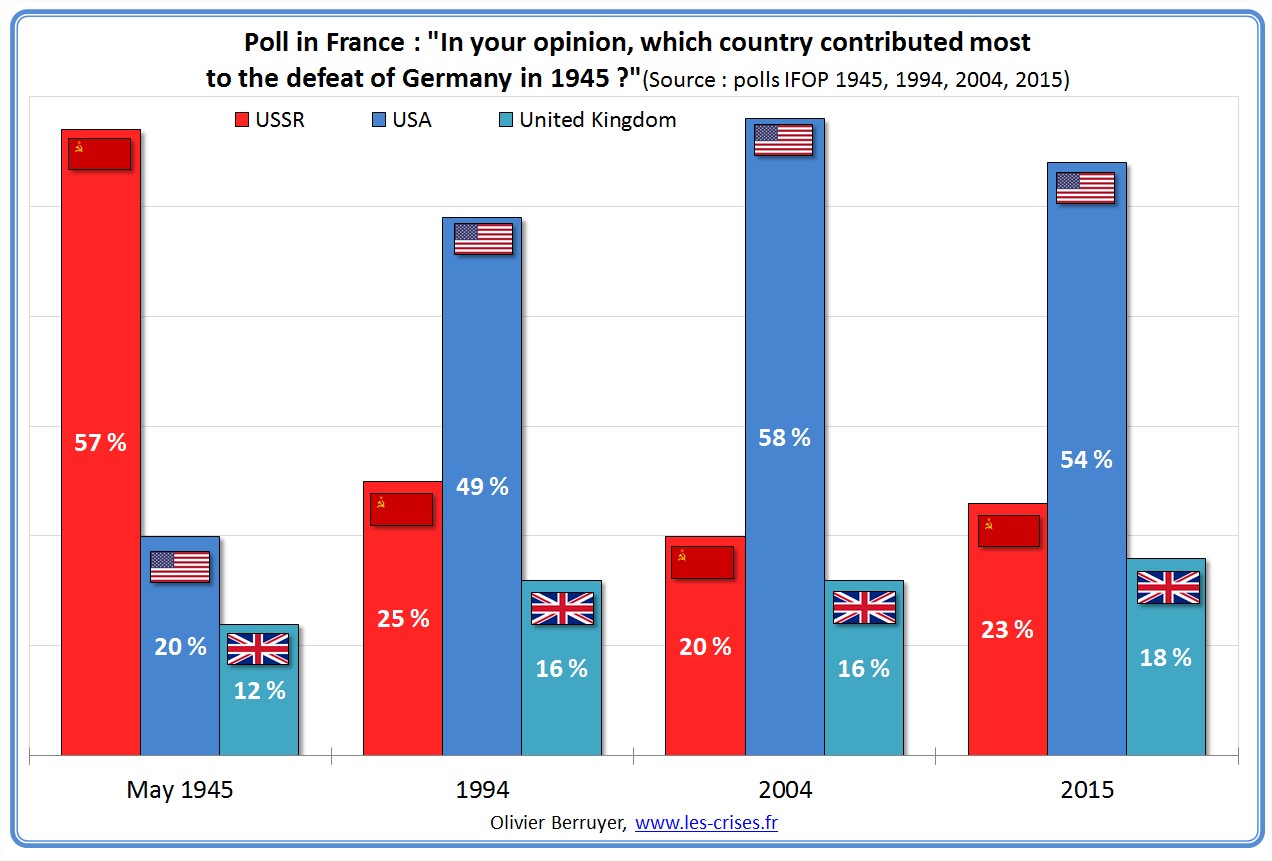 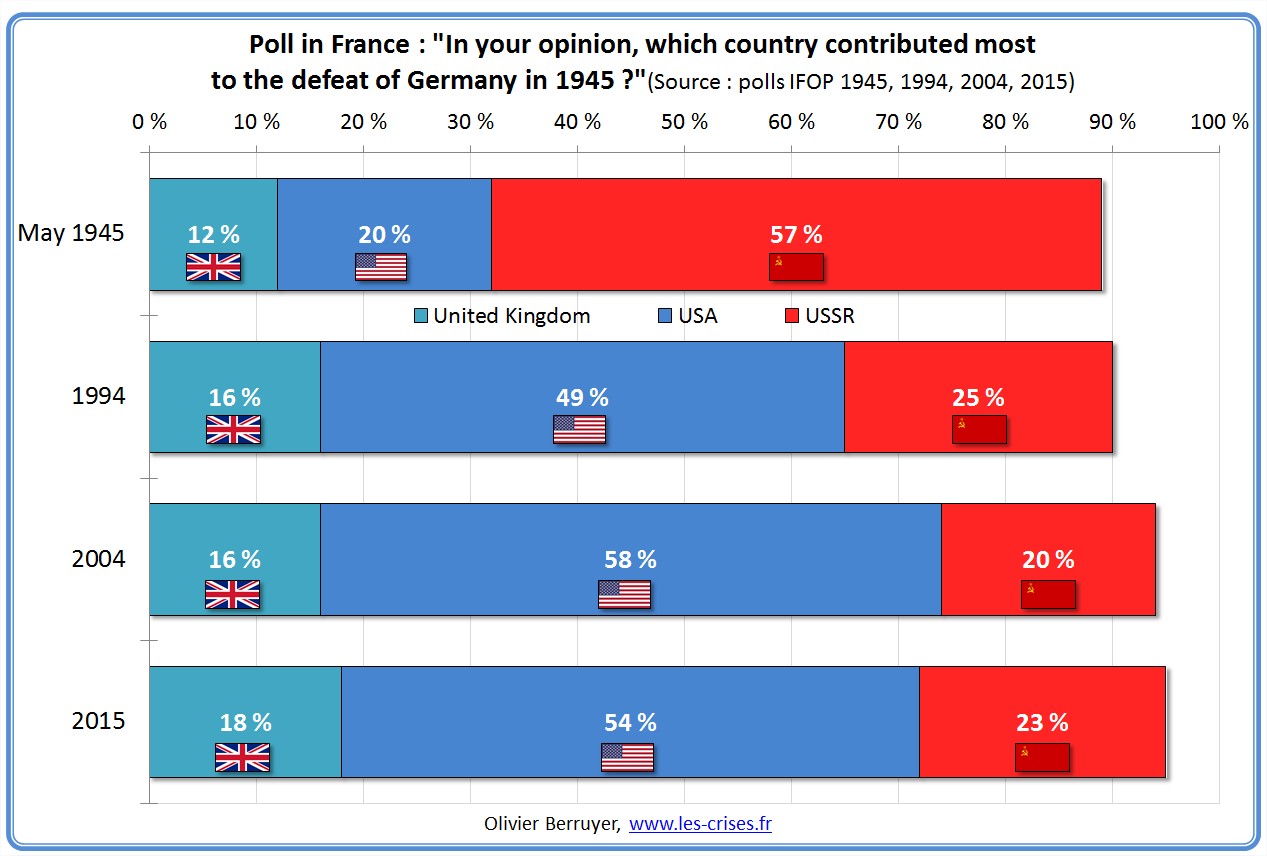 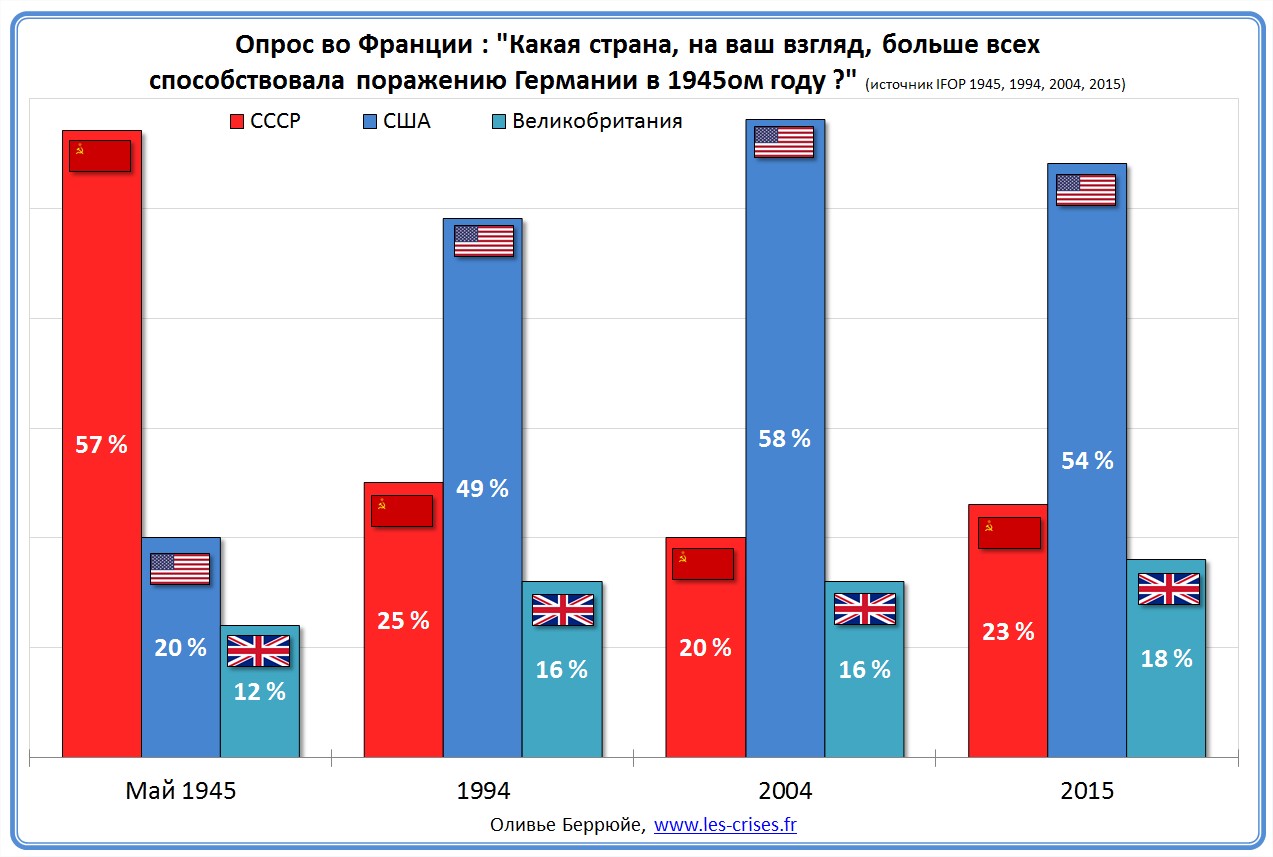 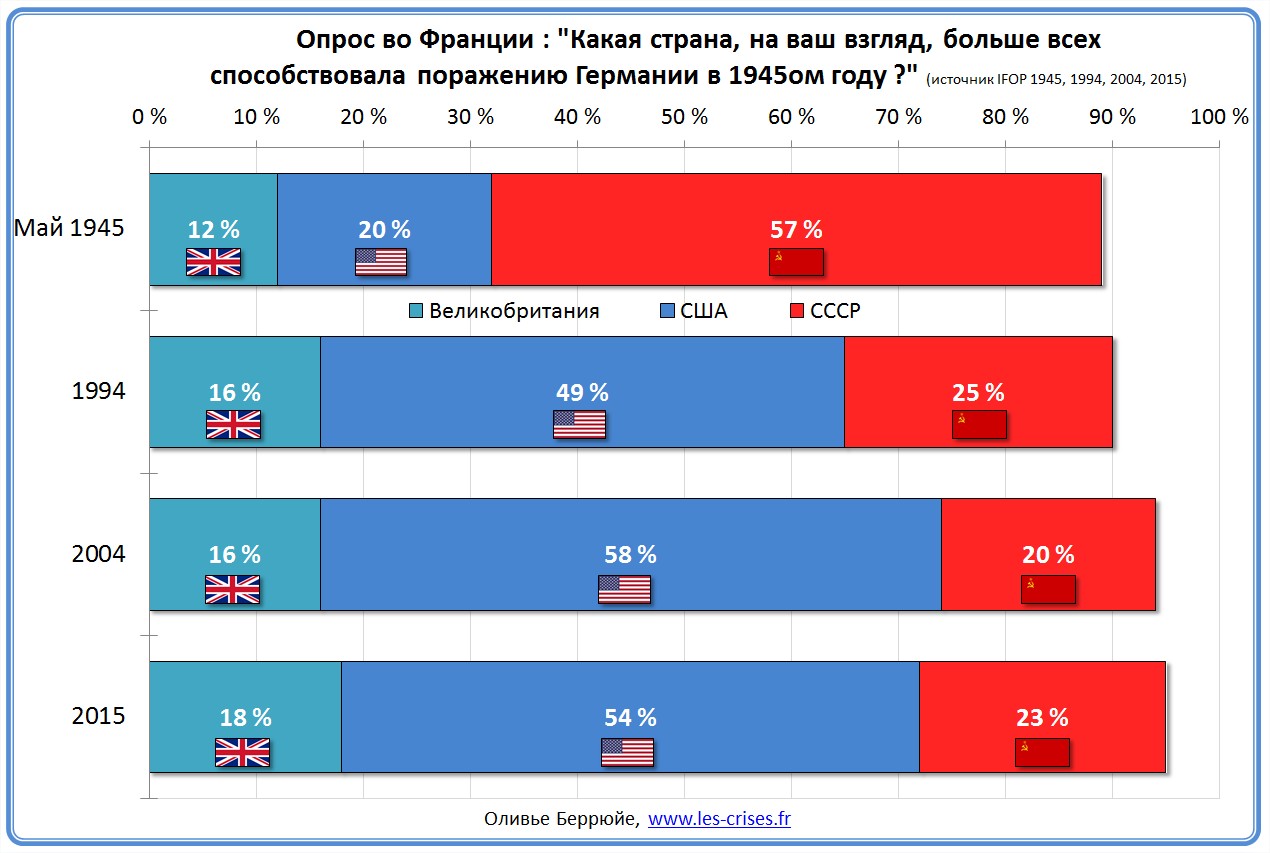 Assessing the “biggest contributor to victory” in a rigorous way is exceptionally difficult. They tend to devolve into comparisons of counterfactuals, and the truth is that nobody has any strong idea how the war would have turned out absent US involvement, or if the German-Soviet non-aggression pact had held, etc. But the case is pretty strong that the Soviet Union’s successful resistance of Nazi invasion and subsequent reclamation of Eastern Europe was the most important of many crucial factors in defeating Germany. As historian Richard Overy explains in his book Why the Allies Won:

“If the defeat of the German army was the central strategic task, the main theatre for it was the conflict on the eastern front. The German army was first weakened there, and then driven back, before the main weight of Allied ground and air forces was brought to bear in 1944. Over four hundred German and Soviet divisions fought along a front of more than 1,000 miles. Soviet forces destroyed or disabled an estimated 607 Axis divisions between 1941 and 1945. The scale and geographical extent of the eastern front dwarfed all earlier warfare. Losses on both sides far exceeded losses anywhere else in the military contest. The war in the east was fought with a ferocity almost unknown on the western fronts. The battles at Stalingrad and Kursk, which broke the back of the German army, drew from the soldiers of both sides the last ounces of physical and moral energy.”

Of course, aerial warfare was also crucial, and there the US and UK played a larger role. And both countries supported the Soviet Union’s ground fight through the Lend-Lease program. Britain’s fight in Africa also deserves some credit; while the losses incurred by Germans there were nowhere near as large as those suffered on the Eastern Front, the second battle in El Alamein, Egypt was hugely important in preventing the Nazis from seizing much of the Middle East. That the Soviet contribution was the most important by no means suggests that the American and British contributions were insignificant or inessential.

Another possible way to compare would be to look at how many German soldiers were killed by the Soviets as opposed to the US or UK. But that’s a bit of a difficult comparison to make. As Michael Charles explains, the Soviets killed more Germans than the US or UK, but the US and UK captured more, so some of the Soviets’ edge is probably attributable to the Red Army just being more brutal than the American or British Armies. Then again, a lot of those captured troops came at the end of the war, when it was more or less random which army German units wound up surrendering to, and didn’t really reflect the relative effectiveness of the Allied armies. Overall, Charles’ analysis suggests that the Soviets took more German troops out of commission than the other Allies did, but the numbers are necessarily rough.

If you’re looking at the human toll of the war, the Soviets clearly incurred the heaviest losses. Tony Judt’s Postwar cites estimates suggesting there were 8.6 million Soviet military deaths and over 16 million civilian deaths in World War II. The US lost 418,500 military and civilians in all theaters of the war — still a staggering figure, but not on the same scale as Soviet losses. Of course, it’s possible — and highly preferable! — to contribute significantly to the war effort without losing many lives in the process, so casualty figures aren’t necessarily a good measure of countries’ relative contributions. But it’s worth reflecting on just how massive the sacrifice the Soviet people made was. 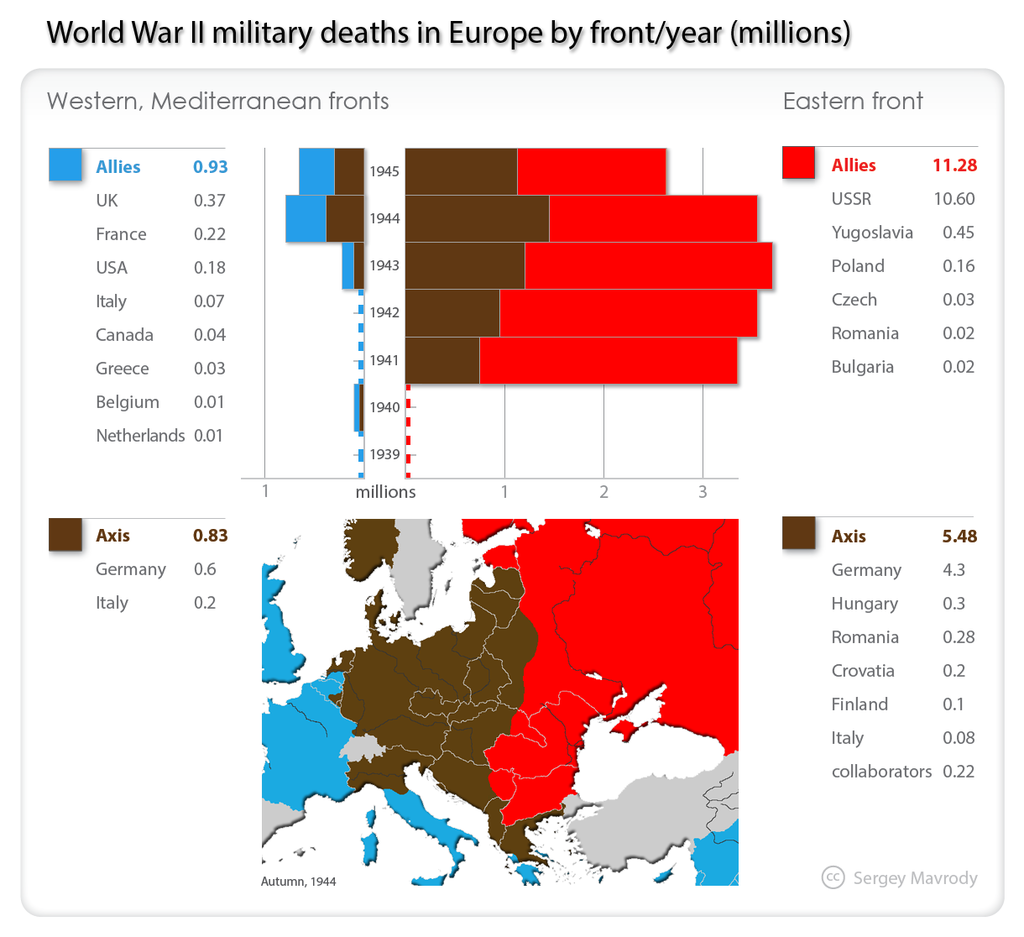