Brzezinski on Afghanistan, Islam and the Soviet Union 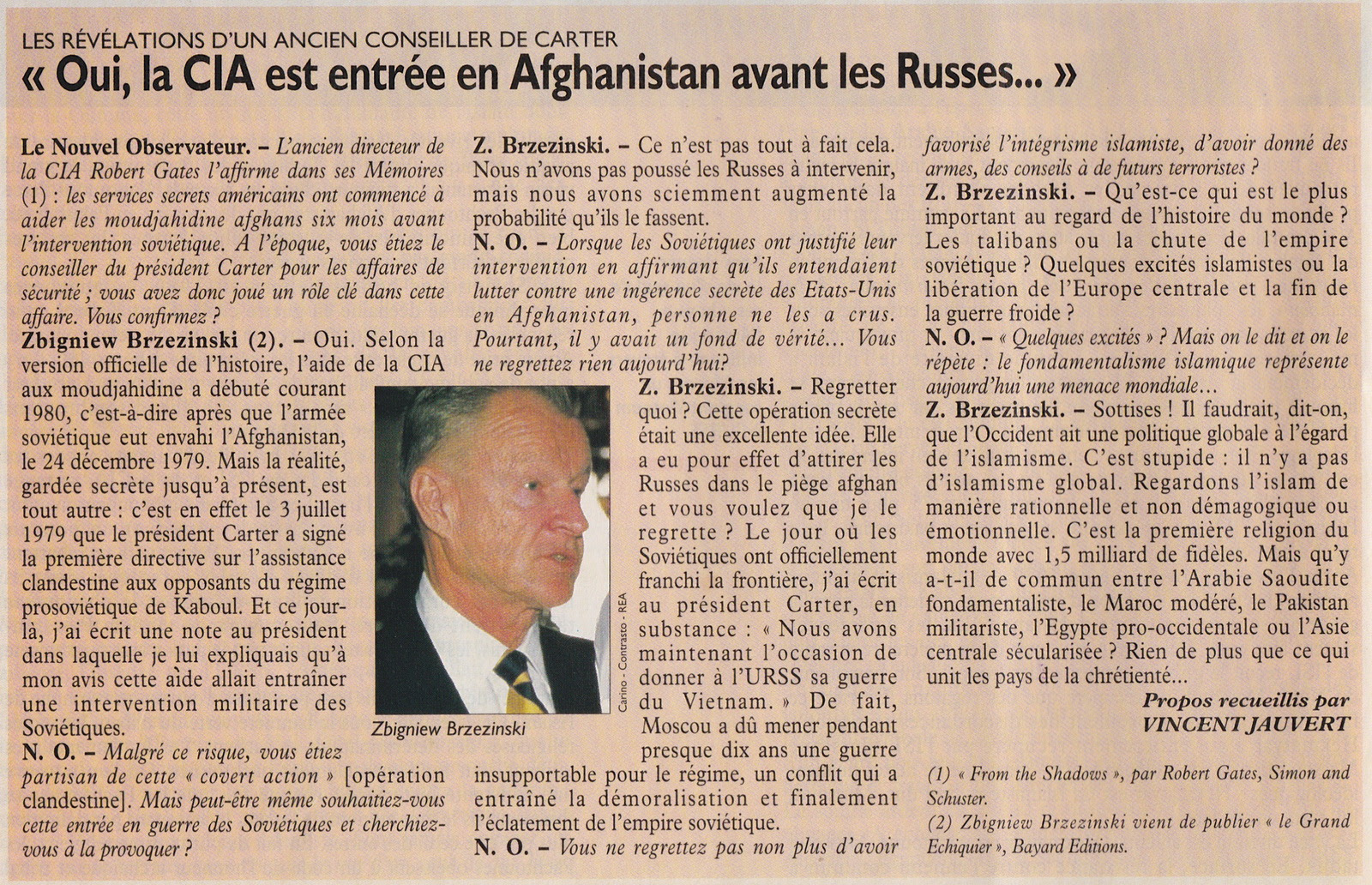 Question: The former director of the CIA, Robert Gates, stated in his memoirs [“From the Shadows”], that American intelligence services began to aid the Mujahadeen in Afghanistan 6 months before the Soviet intervention. In this period you were the national security adviser to President Carter. You therefore played a role in this affair. Is that correct?

Brzezinski: Yes. According to the official version of history, CIA aid to the Mujahadeen began during 1980, that is to say, after the Soviet army invaded Afghanistan, 24 Dec 1979. But the reality, secretly guarded until now, is completely otherwise Indeed, it was July 3, 1979 that President Carter signed the first directive for secret aid to the opponents of the pro-Soviet regime in Kabul. And that very day, I wrote a note to the president in which I explained to him that in my opinion this aid was going to induce a Soviet military intervention.

Q: Despite this risk, you were an advocate of this covert action. But perhaps you yourself desired this Soviet entry into war and looked to provoke it?

B: It isn’t quite that. We didn’t push the Russians to intervene, but we knowingly increased the probability that they would.

Q: When the Soviets justified their intervention by asserting that they intended to fight against a secret involvement of the United States in Afghanistan, people didn’t believe them. However, there was a basis of truth. You don’t regret anything today?

B: Regret what? That secret operation was an excellent idea. It had the effect of drawing the Russians into the Afghan trap and you want me to regret it? The day that the Soviets officially crossed the border, I wrote to President Carter. We now have the opportunity of giving to the USSR its Vietnam war. Indeed, for almost 10 years, Moscow had to carry on a war unsupportable by the government, a conflict that brought about the demoralization and finally the breakup of the Soviet empire.

Read also:
International consequences of a Greek - Turkish war. A way to avert it

Q: And neither do you regret having supported the Islamic fundamentalism, having given arms and advice to future terrorists?

B: What is most important to the history of the world? The Taliban or the collapse of the Soviet empire? Some stirred-up Moslems or the liberation of Central Europe and the end of the cold war?

Q: Some stirred-up Moslems? But it has been said and repeated Islamic fundamentalism represents a world menace today.

B: Nonsense! It is said that the West had a global policy in regard to Islam. That is stupid. There isn’t a global Islam. Look at Islam in a rational manner and without demagoguery or emotion. It is the leading religion of the world with 1.5 billion followers. But what is there in common among Saudi Arabian fundamentalism, moderate Morocco, Pakistan militarism, Egyptian pro-Western or Central Asian secularism? Nothing more than what unites the Christian countries.

Translated from the French by Bill Blum

Published by the French site les-crises.fr