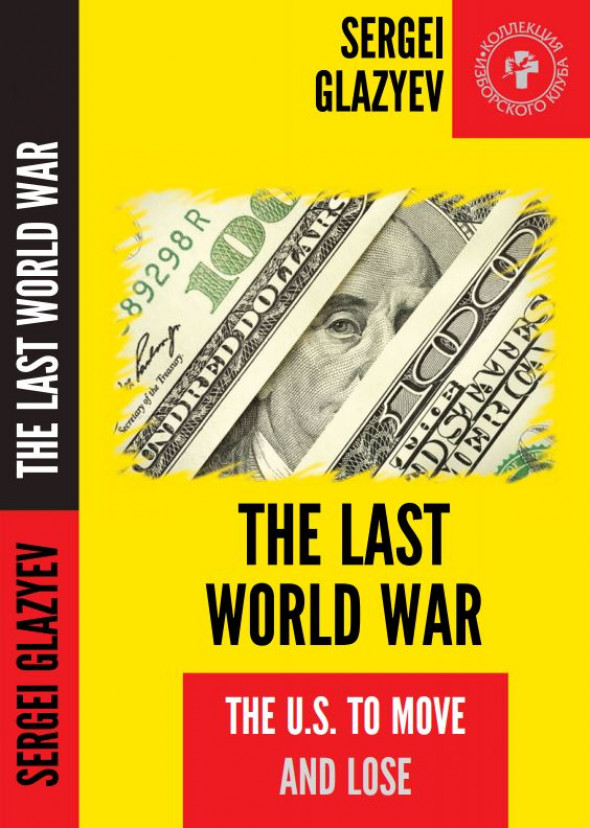 Sergei Glazyev, a well-known Russian politician and economist, after analyzing the global political and economic changes of recent years came to the following conclusion: as a result of the crisis that has engulfed the world, the powers of the West, most notably the U.S., have been increasing their aggression towards other nations. Again, as in the middle of the 20th century, the threat of Eurofascism looms large on the horizon, with Ukrainian nationalists as its advanced detachment. The West has aimed the brunt of its strike at Russia.

Why would America need a new world war, and is it possible to prevent it? Why has Ukraine been chosen as a springboard for it? What can we set against the Western aggression? What future awaits Russia, Ukraine and the whole world in the 21st century? This is what the new book of Academician Sergei Y. Glazyev is about.

You can read or download the book here od here

The book proposed to your attention represents the results of a study of the laws of long cycles of global technical-and-economic and socio-political development as applied to changes in the modern world. Some of them have already been presented in the previously published book, Ukrainian Catastrophe. From American Aggression to World War? In this book, they are supplemented with extensive new data and the results of a laborious analysis of the logic behind the actions of forces that foment a new world war against Russia. The book reveals the combination of objective laws and subjective factors in the structure of the driving forces of this war. The books also shows its being conditioned by the economic interests of the ruling elite of the U.S., uncovering the reasons for choosing Ukraine as a victim of the new American aggression. Based on the system analysis of the causes and on disclosure of the driving forces of this aggression, the book substantiates the measures to repel it. They correspond to the character of this war which, unlike the direct clashes of multi-million armies in the last century, has a hybrid nature and provides for armed intervention only after an ideological and economic destruction of the enemy in the form of punitive operations under the guise of “humanitarian” purposes.

Russian President Vladimir Putin counters American aggression with Eurasian integration based on respect for the national sovereignty of the unifying states based of their objective economic, social, political and humanitarian interests. Unlike the European Union, which has been imposing unequal association on Ukraine through direct coercion and flagrant interference in its internal affairs, the Eurasian Economic Union is premised on voluntariness, mutual benefit and equality of parties.

For many years now, I have to deal in line of duty with the issues of Eurasian economic integration. As it was deepening and expanding, the counteraction from the U.S. and the EU has been gradually increasing. After successful creation of the Customs Union of Belarus, Kazakhstan and Russia, this counteraction turned into direct anti-Russian aggression in Ukraine, Moldova and Georgia with a view of detaching them from the Eurasian integration process. The methods of Western geopolitics used in this process perplexed me with their mendacity, ultraism and cynicism that have been transforming into direct crimes against the peoples of the post-Soviet states. As a scholar professionally engaged in study of long cycles of technological-and-economic development, I understand the objective reasons for American aggressiveness. But as a human being I cannot accept the misanthropic forms used by the American political machine in order to incite national, religious and social conflicts. And, actively participating for many years in social and political life, I have been wondering: how did American political engineers manage to fool tens of millions of educated persons in my kindred Ukraine, imposing on them absolutely false ideas about their national interests, history, culture and politics? How did they turn Ukrainians, who only yesterday did not distinguish themselves from Russians, into rabid Russophobes? How did they manage to impose on one of the peoples most affected by the Nazi occupation the power of Hitler’s epigones? And what are the ways to oppose the American geopolitics aimed at fomenting another world war against Russia? How, finally, is it possible to win, or at least not to lose this war conducted by the leadership of the U.S. and NATO to destroy Russia and the Russian World?

Read also:
‘The Fury of the Virus Illustrates the Folly of War’ – But Trump Is Waging War on the World Health Organisation

This book represents an attempt to answer these questions. The arguments, estimations and proposals presented in it obviously reflect my personal position that might disagree with the official point of view. They are based on a scientific analysis of current events proceeding from long-term patterns of technical and socio-economic development, as well as from a generalization of historical experience. The book gives an objective analysis, a forecast and recommendations that are not conditioned by the current political situation.

The author expresses profound gratitude to his comrades for their assistance in the preparation of this publication: S. Tkachuk, without whose help in the materials selection and editing the book itself would hardly have been written; K. Frolov, who provided invaluable assistance in covering the history of Ukraine, with whose collaboration the chapter on Ukrainian Nazism was written, as well as to colleagues, whose joint works and materials were used to reinforce the author’s position – A. Rogers, D. Mityaev, A. Shirov, R. Ishchenko, A. Davydov, V. Pantin, V. Lokosov, Y. Petrov, I. Lipushkina. It is unlikely that this book would have seen the light of day without the moral support of S. Batchikov and A. Nagorny, as well as other members of the Izborsk Club. I cannot but thank O. Tsarev and O. Noginsky, who verified the key provisions of this book at first hand. Special words of gratitude and admiration go to the activists of the Russian resistance to the neo-fascist regime that occupied Ukraine. Thanks to their courage, perseverance and faith in our God-preserved motherland, the U.S. aggression against Russia was stopped in the Donbass, and we have time to prepare for its repelling and prevention of a new world war.

You can read or download the book here od here

If capitulating to the trans lobby is the best Joe Biden...

Public Letter to the University of Leicester Concerning the Proposed Redundancies...

Shift to a Not-So-Frozen North Is Well Underway, Scientists Warn