The President of Venezuela is opting for prudence as the transition of power prepares to take place in the United States and as lobbying by extremists aims to continue the policies of hate and genocide towards Venezuela, namely the cruel economic sanctions (unilateral coercive measures) affecting all of the Venezuelan people in many areas of daily life.

President Nicolas Maduro joined Spanish journalist and professor, Ignacio Ramonet for a special interview to mark the new year. “On this issue I’m obligated to be prudent. That’s not to say that I don’t have a clear idea on the changes in the United States, on the resounding defeat of Donald Trump. Trump is leaving and we’ll see if with Trump’s exit, if the extremist policies against Venezuela end, we’ll see.”

The Head of State told of new information he received that Leopoldo Lopez who was involved in the promotion and coordination of actors during waves of violence and destabilization and who is now being harboured by Spain, has contracted lobbyists in the U.S. with aims to steer Venezuela policy in the incoming Biden Administration. Despite this, President Maduro says Venezuela wants constructive dialogue with Washington. “Hopefully with the departure of Trump, his extremist, cruel, policies against Venezuela leave and dialogue is restored with Biden and with the United States towards a constructive dialogue. Hopefully.”

LIVE | President Nicolas Maduro sits down for a special interview conducted by Spanish journalist and professor, Ignacio Ramonet. The President talks about the Sputnik V vaccine which will be administered throughout the country. pic.twitter.com/8xO98oLns5

He referred to U.S. attacks as extremist assaults on the Bolivarian Revolution, citing the killing of Iran’s General Solemani and attempts on the President’s life. Last week, the Interior Ministry of Venezuela informed of a dismantled plot, named “Boycott of the National Assembly,” planned and prepared in Colombia which had as target Venezuela’s Guri Hydroelectric Plant, the country’s main refinery and the National Assembly. Leopoldo Lopez had also been involved in this plot and had travelled to Colombia in early December to meet with President Ivan Duque and Senator Alvador Uribe who have been co-conspirators in numerous acts of aggression towards Venezuela and the planning of false flags.

President Maduro on the European Union's support for extremism: "It's been the EU which has followed the chorus to Donald Trump, supporting the policies of barbarism, of rightist extremism.." pic.twitter.com/0tzOsSFivf

Regarding what the Chavista leader thinks of the European Union’s support for extremism, he said “It’s been the EU which has followed the chorus to Donald Trump, supporting the policies of barbarism, of rightist extremism,”

Read also:
North Korea says no need for talks with US as they’re nothing more than ‘shallow trick’ to make Trump look good

All eyes will be on Venezuela come January 5th, when the newly-elected National Assembly will be taking office, following the election on December 6th in which Chavismo won the majority of seats in the legislature, amid a boycott by the extremist right linked to Juan Guaido and other rightists dedicated to sedition, coup-plotting and terrorism, largely from the U.S. Mainstream internaitonal media is expected to stay silent on the matter at a time when crickets can be heard where corporate media once rang loudly in support of the self-declared US-backed opposition figure.

Guaido, who was elected to the 2015 National Assembly and became chair of the legislative body is attempting to remain politically relevant, saying he and the deputies aligned with him have no plans to leave office and will be extending their term indefinitely, despite having no power to do so. The previously elected body has not legislated or exercised power in years and exists as little more than a Twitter account.

The President remarked that the country is subject to constant political renewal with governor elections are on the horizon and as a critical date approaches on which the opposition could attempt to recall President Maduro as per the constitution and that the right-wing sectors will be given the opportunity to contest in the next Presidential election to replace him once his term expires.

“Fist to fist, in taekwondo, boxing, or whatever they want. In elections.”

The full interview of President Nicolas Maduro, conducted by Ignacio Ramonet, can be viewed on our YouTube. 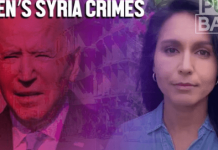