On Sunday Ilham Aliyev, the longtime dictator of Azerbaijan, launched a war on the Armenian held Nagorno-Karabakh area. That he dared to do this now, 27 years after a ceasefire ended a war over the area, is a sign that the larger strategic picture has changed.

When the Soviet Union fell apart the Nagorno-Karabakh area had a mixed population of Azerbaijani (also called Azeri) Shia Muslims and Armenian Christians. As in other former Soviet republics ethnic diversity became problematic when the new states evolved. The mixed areas were fought over and Armenia won the Nagorno-Karabakh area. There have since been several border skirmishes and small wars between the two opponents but the intensity of the fighting is now much higher than before. 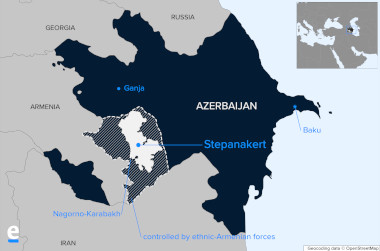 Source: Joshua Kushera – bigger
In 2006 Yasha Levine wrote about his visit to Nagorno-Karabakh for The Exile. He described the uneven opponents:

“In 1994 the Armenians won and forced Azerbaijan to a ceasefire. In the meantime Nagorno-Karabakh organized itself into a sovereign country [called Artsakh] with its own army, elected officials and parliament. But it still hasn’t been recognized by any country other than Armenia and is still classified as one of the “frozen conflicts” in the region, along with the breakaway regions of Abkhazia and South Ossetia in Georgia.

But this “frozen conflict” may soon heat up, if you believe what Azerbaijan’s playboy/gambling addict/president, Ilham Aliyev, says. Not that Azerbaijanis should get too excited about another war: If Armenians are still the fighters they were ten years ago, then statistically, it’s the Azeris who’ll do most of the dying. While matched evenly in soldiers, the Azeris had double the amount of heavy artillery, armored vehicles, and tanks than the Armenians; but when it was over, the Azeri body count was three times higher then that of the Armenians. Azeri casualties stood at 17,000. The Armenians only lost 6,000. And that’s not even counting the remaining Azeri civilians the Armenians ethnically cleansed.

Since the strategically-important Baku-Ceyhan oil pipeline opened up, pumping Caspian Sea oil to the West via Turkey, the Azeri president has been making open threats about reclaiming Nagorno-Karabakh by force. The $10 billion in oil revenues he expects to earn per year once the pipeline is fully operational is going to his head. $10 billion might not seem that much — but for Azerbaijan it constitutes a 30% spike in GDP. In every single interview, Aliyev can’t even mention the pipeline project without veering onto the subject of “resolving” the Nagorno-Karabakh conflict.

Aliyev started spending the oil cash even before the oil started flowing and announced an immediate doubling of military spending. A little later he announced the doubling of all military salaries. Aliyev’s generals aren’t squeamish about bragging that by next year their military budget will be $1.2 billion, or about Armenia’s entire federal budget.”

Over the next 14 years the war that Yasha Levine foresaw in 2006 did not happen. That it was launched now points to an important change. In July another border skirmish broke out for still unknown reasons. Then Turkey stepped in:

“Following the July conflict Turkey’s involvement became much deeper than it had previously been, with unprecedentedly bellicose rhetoric coming from Ankara and repeated high-level visits between the two sides. Ankara appeared to see the Armenia-Azerbaijan conflict as yet another arena in which to exercise its growing foreign policy ambitions, while appealing to a nationalist, anti-Armenian bloc in Turkey’s domestic politics.

“In August, Turkey and Azerbaijan completed two weeks of joint air and land military exercises, including in the Azerbaijani enclave of Naxcivan. Some observers have questioned whether Turkey left behind military equipment or even a contingent of troops.

The potential for robust Turkish involvement in the conflict is being watched closely by Russia, which is already on opposing sides with the NATO member in conflicts in Libya and Syria.

Russia sells weapons to both Azerbaijan and Armenia, but has a military base in Armenia and favors that strategic partnership.”

Azerbaijan has bought drones from Turkey and Israel and there are rumors that they are flown by Turkish and Israeli personal. Turkey also hired 2,000 to 4,000 Sunni Jihadis from Syria to fight for the Shia Azerbaijan. A dozen of them were already killed on the first day of the war. One wonders how long they will be willing to be used as cannon fodder by the otherwise hated Shia.

There were additional rumors that there are Turkish fighter jets in Azerbaijan while Turkish spy planes look at the air-space over Armenia from its western border. 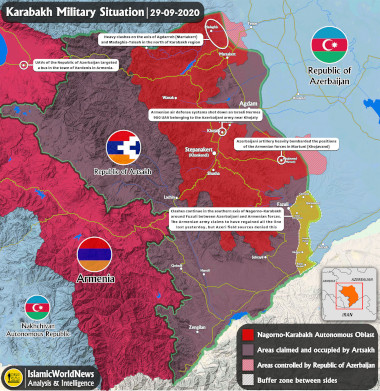 Source: IWN News – bigger
The immediate Azerbaijani war aim is to take the two districts Fizuli and Jabrayil in south-eastern corner of the Armenian held land:

“While the core of the conflict between the two sides is the territory of Nagorno-Karabakh, Fuzuli and Jabrayil are two of the seven districts surrounding Karabakh that Armenian forces occupy as well. Those districts, which were almost entirely populated by ethnic Azerbaijanis before the war, were home to the large majority of the more than 600,000 Azerbaijanis displaced in the conflict.

While there has been some modest settlement by Armenians into some of the occupied territories, Fuzuli and Jabrayil remain nearly entirely unpopulated.”

The two districts have good farm land and Armenia, already poor, will want to keep them. It certainly is putting up a strong fight over them.

The war has not progressed well for Azerbaijan. It has already lost dozens of tanks (vid) and hundreds of soldiers. Internet access in the country has been completely blocked to hide the losses.

The losses do not hinder Erdogan’s scribes to already write of victory:

“Defending Azerbaijan is defending the homeland. This is our political identity and conscious. Our geopolitical mind and defense strategies are no different. Always remember, “homeland” is a very broad concept for us!

We are not making a simple exaggeration when we say “History has been reset.” We are expecting a victory from the Caucasus as well!”

An hour ago the Armenian government said that Turkey shot down one of its planes:

“Armenia says one of its fighter jets was shot down by a Turkish jet, in a major escalation in the conflict over the disputed Nagorno-Karabakh region.

The Armenian foreign ministry said the pilot of the Soviet-made SU-25 died after being hit by the Turkish F-16 in Armenian air space.

Turkey, which is backing Azerbaijan in the conflict, has denied the claim. ”
…
Azerbaijan has repeatedly stated that its air force does not have F-16 fighter jets. However, Turkey does.

A Turkish attack within Armenian borders would trigger the Collective Security Treaty which obligates Russia and others to defend Armenia.

A Russian entry into the war would give Erdogan a serious headache.

But that might not even be his worst problem. The Turkish economy is shrinking, the Central Bank has only little hard currency left, inflation is hight and the Turkish Lira continues to fall. Today it hit a new record low. 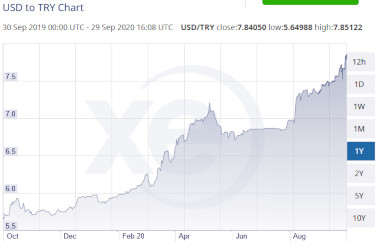 Source: Xe – bigger
Azerbaijan has quite a bit of oil money and may be able to help Erdogan. Money may indeed be a part of Erdogan’s motivation to take part in this war.

Russia will certainly not jump head first into the conflict. It will be very careful to not over-extend itself and to thereby fall into a U.S. laid trap.

Last year the Pentagon financed RAND Corporation released a report that laid out plans against Russia:

“Drawing on quantitative and qualitative data from Western and Russian sources, this report examines Russia’s economic, political, and military vulnerabilities and anxieties. It then analyzes potential policy options to exploit them — ideologically, economically, geopolitically, and militarily (including air and space, maritime, land, and multidomain options).”

As one option the report discussed to over-extend Russia (pdf) in the Caucasus:

Alternatively, the United States could try to induce Armenia to break with Russia. Although a long-standing Russian partner, Armenia has also developed ties with the West: It provides troops to NATO-led operations in Afghanistan and is a member of NATO’s Partnership for Peace, and it also recently agreed to strengthen its political ties with the EU. The United States might try to encourage Armenia to move fully into the NATO orbit. If the United States were to succeed in this policy, then Russia might be forced to withdraw from its army base at Gyumri and an army and air base near Yerevan (currently leased until 2044), and divert even more resources to its Southern Military District.”

The RAND report gives those options only a poor chance to succeed. But that does not not mean that the U.S. would not try to create some additional problems in Russia’s southern near abroad. It may have given its NATO ally Turkey a signal that it would not mind if Erdogan gives Aliyev a helping hand and jumps into anther war against Russia.

Unless Armenian core land is seriously attacked Russia will likely stay aside. It will help Armenia with intelligence and equipment flown in through Iran. It will continue to talk with both sides and will try to arrange a ceasefire.

Pressing Azerbaijan into one will first require some significant Armenian successes against the invading forces. Thirty years agon the Armenians proved to be far better soldiers than the Azeris. From what one can gain from social media material that seems to still be the case. It will be the decisive element for the outcome of this conflict.

How America Took Out The Nord Stream Pipeline

Aid to earthquake victims requires the immediate lifting of US sanctions...