Vladimir Putin has appeared as James Bond on the front page of the French paper Liberation. But the story, titled ‘Tomorrow Never Dies,’ did not lionize Russian scientists who developed the world’s first coronavirus vaccine. 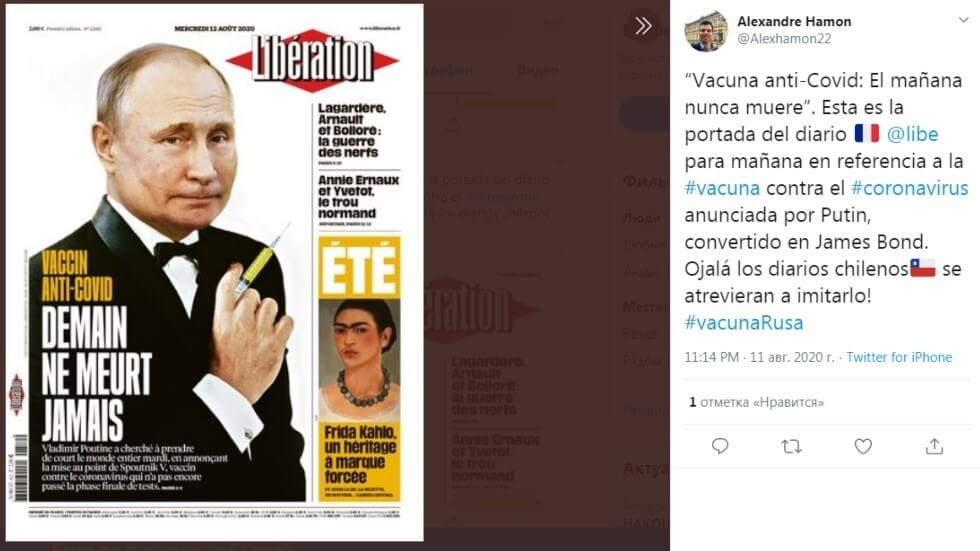 Unlike the fictional British spy, who always carried a pistol, Putin was pictured armed with a syringe supposedly containing the pioneering vaccine against Covid-19. The virus, which clearly has “a license to kill,” has already caused more than 740,000 fatalities around the globe, not to mention an economic downturn, and several countries have been racing to get a working vaccine.

The headline of the article conspicuously matched the title of the 1997 Bond movie ‘Tomorrow Never Dies,’ starring Pierce Brosnan, but the similarities ended there, as it obviously did not paint Putin as the savior of locked-down humanity.

Instead, the article criticized Moscow for being “irresponsible” for rolling out a “rushed” vaccine – a spin consistent with the line taken in other French reporting and by the Western media in general.

Today's @libe on Vladimir Putin's announcing a Russian anti-#Covid vaccine. 'Tomorrow never dies', says the headline, quoting a #JamesBond movie. I'd rather freak out than be reassured looking at that syringe. #coronavirus #COVID19 pic.twitter.com/CSUWkMCUWL

The ‘Sputnik V’ vaccine was approved by Russia’s Health Ministry on Tuesday, having passed all the tests required by the nation. When Putin presented the vaccine to the media, he revealed that his own daughter was one of the first to a receive a shot.

The registration of the vaccine is not the end of the testing process, however, and thousands of volunteers will soon get the jab in Russia and abroad to study its effects.

While Sputnik V has been met with extreme prejudice in the West, Russia has already received orders for the vaccine from at least 20 countries. Russia’s Heath Minister Mikhail Murashko has called the media reaction a premeditated attempt to discredit a competitor that happened to get to the front of the pack.