A delegation of the Interparliamentary Assembly on Orthodoxy (I.A.O.), headed by the Secretary General Dr. Maximos Charakopoulos visited Tuscany, to present the Italian edition of the volume “Hagia Sophia: The Churches of the Wisdom of God around the world” and hold meetings with local political and religious authorities. The delegation consisted of the Members of Parliaments Mr. Sisak Gabrielyan and Mr. Hrachya Hakobyan (Armenia), Mr. Mile Talevski (North Macedonia), Mr. Panikos Leonidou (Cyprus) and Mr. Eugeniusz Czykwin (Poland), the I.A.O. Advisors Dr. Kostas Mygdalis and Mr. Alexandr Fomenko and the I.A.O. Liaison with Catholic Institutions Mr. Virgilio Avato. 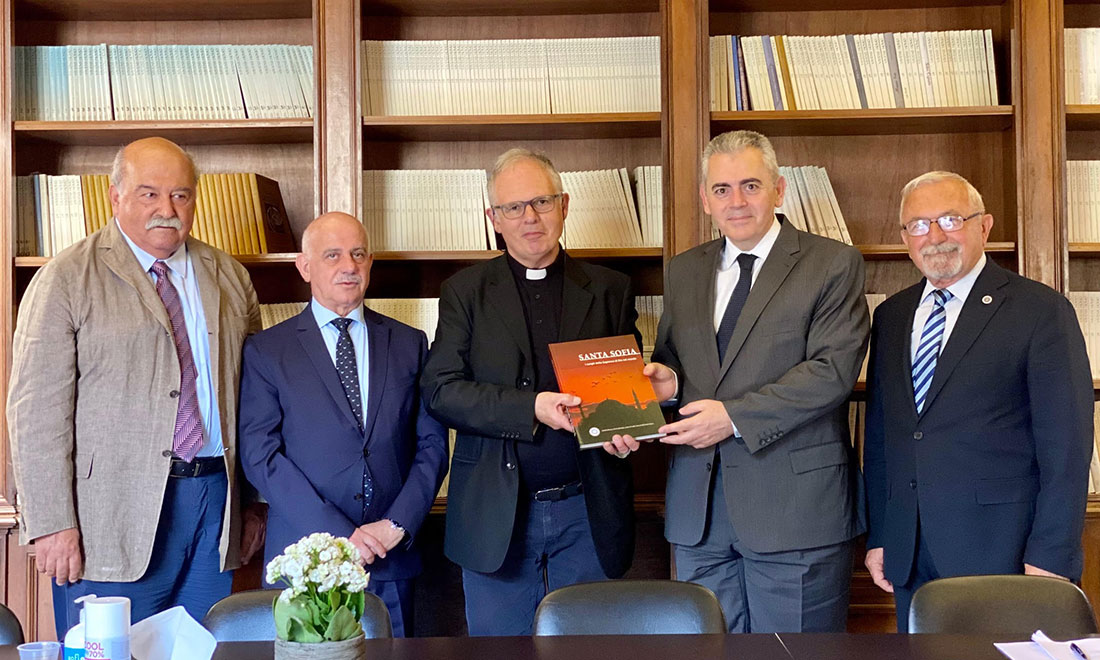 The presentation of the Volume, which aims to raise awareness of the international public opinion for the conversion of Hagia Sophia in Istanbul into a mosque, took place in the amphitheater of the Theological School of Central Italy in Florence with the participation of Cardinal Giuseppe Betori and distinguished professors. The I.A.O. Secretary General, presenting the volume, stressed “following the conversion of Hagia Sophia into a mosque, there are damages from the use of the narthex as a shoe rack and the daily attendance of tens of thousands of visitors, who use the monument even for their overnight stay. Turkish media also rebuke this fact, such as the newspaper Cumhuriyet, which warns that if current situation continues, Hagia Sophia will be destroyed by 2050”.

The event was attended by the Secretary General of the Hellenic Parliament Mr. George Mylonakis, the Director of the Publishing and Printing Department of the Hellenic Parliament Mr. Sotirios Stasinopoulos, the Greek Honorary Consul Ms. Peggy Petrakakou and the Archimandrite Fr. Nikolaos. The Dean of the School Don Stefano Tarocchi, the Cardinal Giuseppe Betori and the founder of the “Summer School of Religion”, Professor Emeritus on Sociology, Mr. Arnaldo Nesti addressed the audience. In addition, the volume was presented by Monsignor Timothy Verdon, Professor at Stanford University, expert in ecclesiastical art, member of the Center for Italian Renaissance Studies at Harvard University, and Fr. Adalberto Mainardi, from the Monastero di Bose, while the Professor of the Theological School of Central Italy Don Alfredo Jacopozzi, coordinated the event.

Cardinal Giuseppe Betori stressed the need for coordination to awaken international public opinion on the Hagia Sophia issue. The other speakers developed various aspects of the historical, cultural and spiritual value of Hagia Sophia, while supporting the I.A.O. initiative to overturn the arbitrary Turkish decision. Prior to the presentation of the Volume, a meeting was held between the Dean of the Theological School Don Stefano Tarocchi and Professor Don Alfredo Jacopozzi, and the I.A.O. Secretary General Dr. Maximos Charakopoulos, the head of the Cypriot delegation to the I.A.O. Mr. Panikos Leonidou, and Mr. Virgilio Avato, I.A.O. liaison with Catholic Institutions. 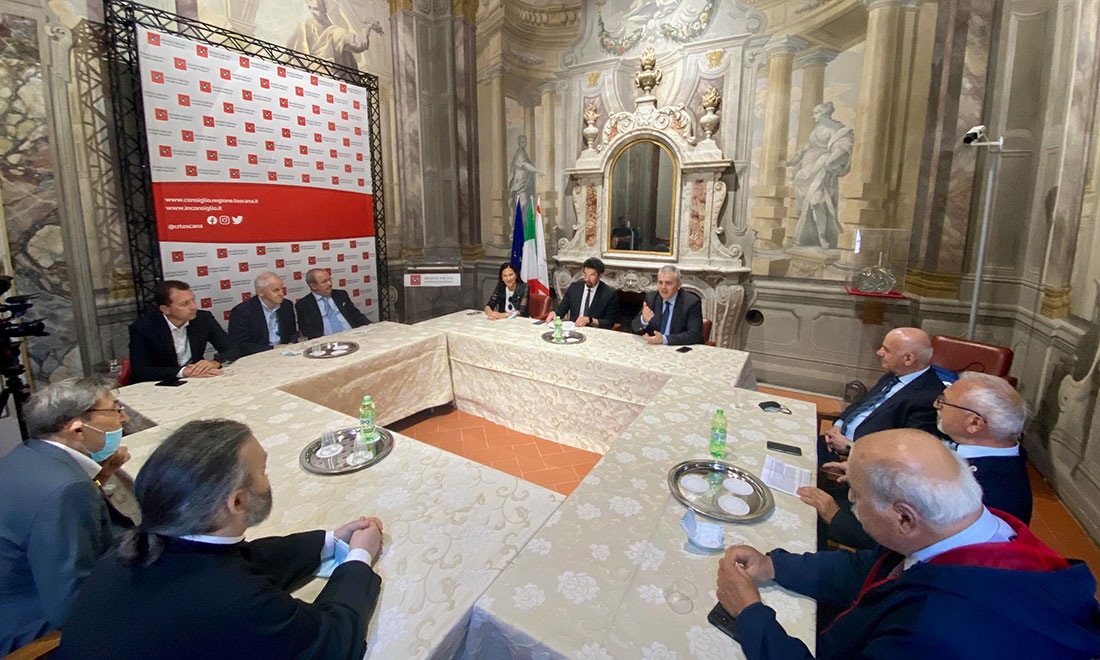 The I.A.O. delegation visited the Regional Council of the historic municipality of San Gimignano in Italy – recognized by Unesco as a World Heritage Site. During the meeting, the I.A.O. Secretary General said inter-alia: “Serving the high principles of humanity and solidarity, which are the essence of the message of Christianity, we must work, even in the conditions of war, for the next day. To build bridges between counter parties, and not destroy them. To prepare for unity, even when division seems to prevail.” 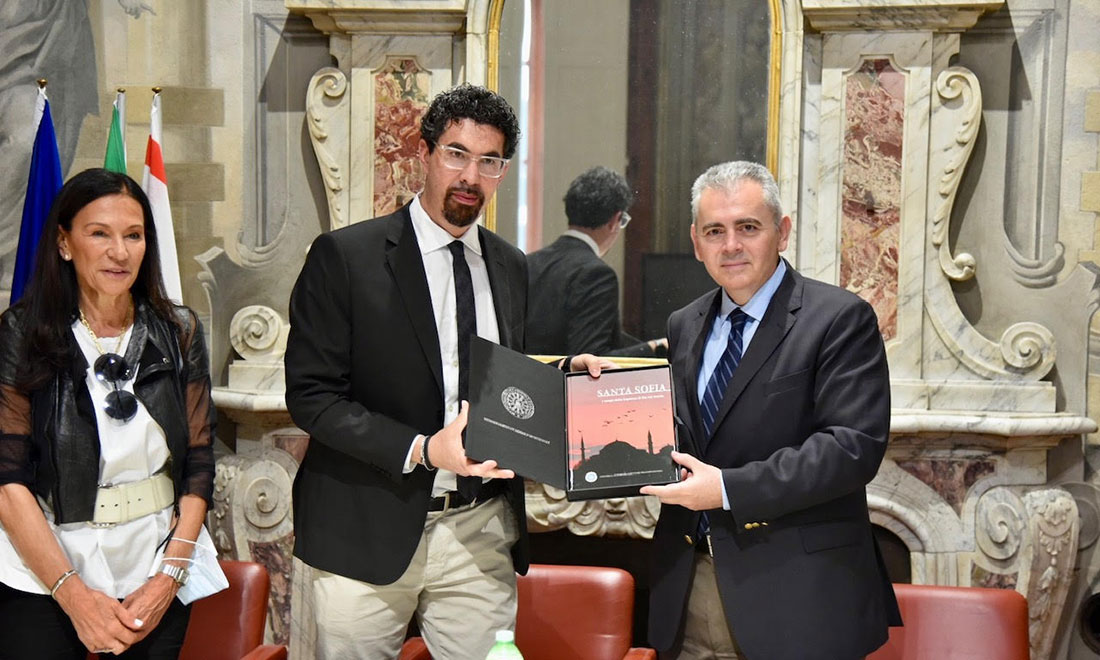 During their stay in San Gimignano the I.A.O. delegation visited the headquarters of the Summer School of Religion which is developing a remarkable initiative in the field of mutual understanding and cooperation between religions. 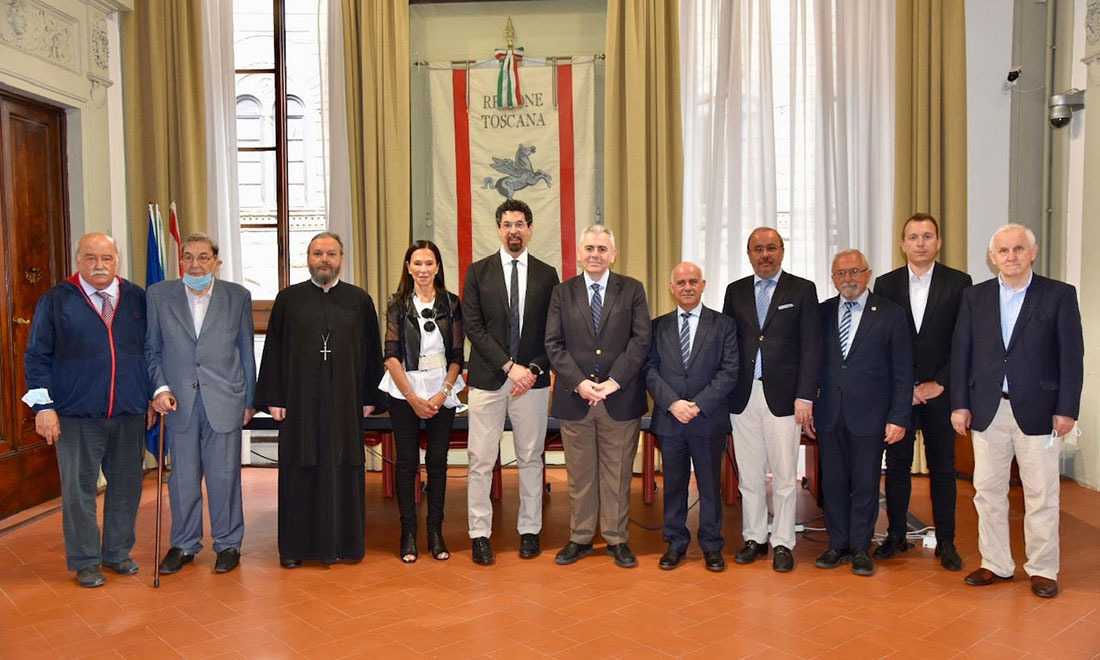 The delegation was warmly welcomed at the University of Sophia in Loppiano region, founded by Chiara Lübich, after the influence she received from the Ecumenical Patriarch Athenagoras. The delegation was welcomed by the Rector of the University, Professor Giuseppe Argiolas, who referred to the aims of the University’s curriculum, and Professor Pietro Coda, co-founder of the “Athenagoras Chair”, inaugurated by His All Holiness the Ecumenical Patriarch Bartholomew. During their stay in Florence, the delegates cooperated with the Head of International Relations of the Tuscan Region, Mr. Francesco Sangermano. It should be noted that the I.A.O. delegation accompanied by the Honorary Consul of Greece Ms. Peggy Petrakakou had the opportunity to attend the Holy Liturgy at the Orthodox Church of St. Jacob the Apostle (Chiesa di San Jacopo Sorpano), in Florence, performed by Archimandrite Fr. Nikolaos. Finally, the Orthodox deputies visited the historic catholic monastery of Archangel Michael (Abbey of San Michele Arcangelo).