Feb. 2—A decade of brutal austerity forced on Greece by its international creditors has led to the worst mass murder since the occupation of the country by the Axis Powers in World War II. Official data from the Hellenic Statistics Office reveal that between 2010, when Greece was put under a brutal regime of austerity, and 2020, the number of deaths increased by over 40%. This represented an increase of 140,000 excess, unnecessary deaths over the course of the last decade of brutal austerity, imposed on Greece as the European Union’s “solution” to a debt crisis in Europe’s biggest banks. Those years saw the Greek economy collapse by 35%, unemployment increase by 35%, its health system destroyed, pensions and wages cut, and an increase in the number of suicides.

The collapse of the Greek healthcare system was dramatically exposed when a member of the Hellenic Parliament, Panagiotis Kouroumblis, charged that the ruling New Democracy Party had “murdered thousands of people.” This followed the release of an official report documenting that there were high numbers of fatalities of COVID-19 patients on ventilators in private hospitals, because the government refused to expand the intensive care units (ICUs) in public hospitals. The author was Dr. Sotiris Tsiodras, head of infectious diseases at the National Public Health Organization and a former spokesman for the government’s advisory panel of doctors and scientists on the COVID-19 pandemic. The report exposed regional disparities in healthcare system which also led to an increase in the death rate among COVID 19 sufferers.

The result is not surprising since Greece’s healthcare system was all but destroyed by the brutal austerity forced on the Greek government by the European Union and international creditors.

While the current New Democracy government handled the first wave of COVID-19 well because it listened to the medical experts, its response has become disastrous since it opened Greece up for tourism and failed to strengthen the healthcare system. In a country of only 10 million people, over 10% of the population has suffered COVID-19 infections, and nearly 21,000 have died since the pandemic began.

For telling the truth, Kouroumblis, who is a veteran politician, and blind, was not only denounced by the ruling party, but was expelled by the Syriza Party which did not have the courage to support him. He was censured by the speaker of the parliament and forced to forfeit a quarter of his pay. Nonetheless he will continue to serve as an independent MP.

These excess deaths are directly the result of the policies forced on Greece by its international creditors, including the International Monetary Fund, the European Union, and the European Central Bank. These policies were aimed at saving a bankrupt financial system which collapsed in 2008, at the expense of the populations of entire countries. That system continues to exist and once again threatens to precipitate a collapse far worse than that of 2008. In 2008 the three institutions just named, along with the U.S. Federal Reserve, bailed out all of the American and European megabanks to the tune of trillions of dollars, and put into action the massive liquidity pump euphemistically called “quantitative easing,” combined with negative interest rates that has now led directly to the current runaway inflation in the Western economies.

Because of the refusal of western governments after the 2008 global crash to re-introduce the Glass Steagall Act, separating commercial and investment banking, by 2010 Europe was in a state of economic depression. Nonetheless, after the initial bailout of these banks the European Union imposed a policy of economic austerity on the governments of Western Europe, particularly within the Euro currency zone. This led directly to the so-called Greek debt crisis, followed by similar crises in Cyprus, Spain, Ireland, and Italy. Despite the fact that in 2010 Greece had begun implementing a stabilization program, it was forced into default by the financial markets controlled by the same major European banks which held Greece’s debt.

The resulting crisis forced Greece into the hands of the notorious Troika: the IMF, European Central Bank and the Eurogroup (finance ministers of the European Union countries belonging to the euro currency zone). Between 2010 and 2015 Greece was forced, on threat of being cut off by the European Central Bank and even of expulsion from the Eurozone, to sign three memoranda stipulating deep budget cuts in return for 200 billion euros in bailout funds, which went directly to Greece’s megabank creditors. The result was a doubling of Greece’s debt burden and massive cuts in pension programs, the national healthcare system and government expenditures. Greece’s economy shrank by 35%, and unemployment shot up to over 30% with youth unemployment reaching 65%, while hundreds of thousands of Greeks emigrated to other countries seeking employment.

The worst cuts happened during the government led by New Democracy party (2012-2015). The Syriza Party could not fully reverse these cuts when it came to power in 2015, and itself signed the third memorandum. Kouroumblis had been the Syriza government’s Minister of Health and Social Security, a position he soon left because he was unable to reverse the damage. Greece only has 500 ICU beds in its state hospitals, which have not been increased during the pandemic, forcing the government to rely on private hospitals, which are also limited. 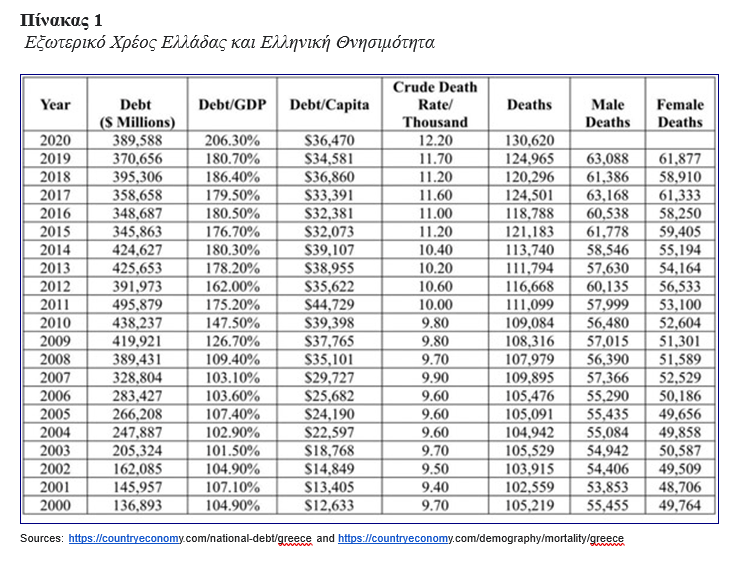 The official statistics demonstrate the truth: that debt and austerity kills. Figure 1 compares the increase in Greece’s foreign debt over this century thus far, compared to the number of deaths and national death rate between 2000 and 2020. Both sections of the table show parallel, sharp upward curves.

According to official statistics, over the course of the post-World War II period, Greece’s population steadily increased, peaking at 11.2 million in 2004. This peak was reached three years after Greece had joined the Eurozone in 2001, but the alleged economic benefits promised by the euro proved an illusion. The total population has steadily decreased and now stands at 10.4 million, a loss of some 800,000 people, in part due to net out-migration, which has accelerated since 2010 when the country signed its first memorandum.

Read also:
Weird science: How a 'shoddy' Bannon-backed paper on coronavirus origins made its way to an audience of millions

Greece’s mortality rate per 1,000 increased from 9.8 in 2009 to an estimated 12.05 for 2021, according to the CIA’s World Factbook. The fact that the causes of death have generally not changed (except, of course, for the COVID-19 pandemic in the last two years) means the increase can easily be attributed to economic causes, especially the contraction of the economy by 35%, the collapse of the healthcare system, protracted unemployment, and the increase in poverty, particularly among elderly who have seen their pensions dramatically reduced. The Greek death rate had already increased by two per thousand (or by one-fifth over the year 2000) by 2019. It is important to note that the death rates in Germany, France and Great Britain, whose banks benefited from the Greek bailout, have not appreciably increased in this century, except during the COVID-19 pandemic.

Under the Nazi occupation, 21,000 Greeks were executed, and 578,000 Greeks died, mostly from disease and starvation due to wartime conditions and economic looting of the country. If brutal austerity had not been forced on Greece beginning 2012, accelerating an economic downturn into a collapse of the economy by 35%, the number of deaths in Greece would have averaged no more than 108,000, Subtracting the latter figure from the totals each year over the last decade, it can be estimated that an excess of 140,000 deaths occurred.

One might say that is “only” one-quarter the number in World War II. Nonetheless these deaths did not occur during wartime conditions at the hands of Nazis and the Wehrmacht. They resulted from decisions made by the bureaucrats of the European Commission, the European Central Bank, and the International Monetary Fund, armed with black briefcases and fountain pens, and accepted by Greece under threat of being thrown out of the Eurozone and cut off from all credit begin now, guiding our work through each year with those goals as our objective.

This means, that we must think of increasing the physical output of a nation such as Peru by as much as ten percent or more each year over the next forty years. To sustain that growth, we must increase the productivity of employed labor by an average such as “not less than three to five percent a year.” This means a continuing process of technological progress. You will require cooperation from the United States, but it is my will that you should have that cooperation. Our own and other nations, working together to reach our goals forty years from now, must adopt the right policy today, and progress along that pathway year by year.

The best way to choose today’s policies, is to select the goals we know to be possible and desirable forty to fifty years from now, and shape today’s policies to guide us step by step to those objectives.

Never accept the idea that some countries are rich, and other countries are poor. Never accept the idea of being a poor country. Never think of yourself as a person from a poor country. I have asked you to turn your eyes up to the stars, to see, with pride and confidence, what your mind is capable of enabling you to accomplish. Your dreaming that dream of the stars, is your nation’s potential; your nation’s potential is its future reality. What it shall become in the future, is what your nation is becoming today.

With the right policy, under a just international economic order, within forty years you can be part of helping Peru to do anything that any other nation could do, including achieving about the same standard of living as the people of any other nation. Never accept the sight of human misery; human misery is unnecessary. Never accept the idea that the world is in danger of being overpopulated by anything except a surplus of diseases and Malthusians.

What I have described is a scientific reality. All that we require is a just international economic order during the months just ahead of us today: and then all that I have described will be the future of Peru forty years from now, a future you will personally help to build, with your labor of today and tomorrow. Let a true vision of what you and your children could build Peru to become, be your source of pride and confidence in our common effort to build a new and just order among nations.