Turkish President Erdogan sent the lira sliding on Tuesday when he refused to meet with Trump National Security Advisor John Bolton during the latter’s trip to Turkey after Bolton successfully convinced Trump to hold off on withdrawing 2,000 US troops from Syria until it had received assurances from Turkey that the Turks wouldn’t attack US-backed Kurds in the region.

Bolton revealed the change in direction during a Sunday interview, ahead of a planned trip abroad where he will visit Turkey and Israel to discuss the terms of the US withdrawal.

Instead of meeting with Bolton, Erdogan used a prescheduled speech in parliament to criticize American proposals that the Kurdish group play a key role in Syria after the US withdraws, according to Bloomberg.

Turkey, Erdogan said, has already completed preparations for how it will combat the remnants of ISIS after the US withdraws and has already drawn up plans to neutralize “all terror threats,” Erdogan said Tuesday during a speech to members of his ruling AKP Party.

“We will very soon mobilize to eliminate terrorist organizations in Syria,” he said. “If there are other terrorists who would attempt to intervene in our intervention then it is our duty to eliminate them as well,” Erdogan added in a likely reference to Kurdish fighters on Turkey’s border, whom Erdogan views as a threat because of their affiliation with Kurdish separatist groups within Turkey.

The news sent the lira lower amid renewed tensions between the US and Turkey following hopes that the feuding NATO members might finally be setting aside their differences. 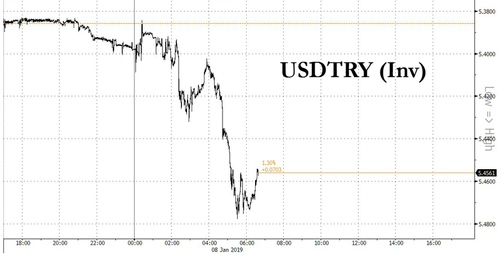 Turkey has reportedly been planning an attack on the US-backed YPG, one of the key proxy groups for the US. Henrik Gullerg, a strategist at Nomura, said Erdogan’s decision to snub Bolton is a sign that “he must be very annoyed” at the US.