Julian Assange, Alina Lipp and Anne-laure Bonnel are three journalists who are paying a high price for telling the truth in the West: attempts to suffocate them financially, followed by censorship, threats of imprisonment or imprisonment altogether, and even physical and psychological torture in the case of Assange. These three cases illustrate perfectly the reality of “democracy” in the West.

The case of Julian Assange, whose extradition has just been approved by the British authorities, is the most publicized and the most revealing of what can happen to a Western journalist who dares to tell the truth.

In 2006, Julian Assange founded Wikileaks, a non-governmental, non-profit organisation, which publishes classified documents provided by whistleblowers on its website. The site has since published millions of documents concerning human rights violations, corruption scandals and, above all, war crimes.

In 2010, just as the website was about to publish documents on the war in Iraq, Julian Assange’s request for a work and residence permit was refused by Sweden. He had chosen Sweden because of its strict legislation on the protection of journalistic sources. But to reveal the war crimes of the United States in Iraq and Afghanistan is to incur the wrath of Washington and the American military-industrial complex. This is where the descent into hell begins for Julian Assange.

In 2011 the attempt to financially suffocate the Wikileaks website began. Visa, Mastercard, Bank of America, PayPal and Western Union organized a financial blockade of Wikileaks, reducing the organization’s income by 95%, which then turned to crypto-currencies to escape financial suffocation.

From 2012 onwards, censorship through massive computer attacks against the site is launched. The aim is to try to prevent people from accessing the millions of documents published on the site. For the record, it was Wikileaks that helped Edward Snowden get out of Hong Kong and gain political asylum in Russia.

In parallel, from 2010 to 2012, Julian Assange was placed under probation in the United Kingdom following a charge of sexual offence made in Sweden in 2010. Assange denounced this as a bogus charge, the sole purpose of which was to send him to Sweden from where he could be extradited to the US. Following the refusal of the UK Supreme Court to reject the extradition request to Sweden, Julian Assange took refuge on 19 June 2012 in the Ecuadorian embassy in London, where he lived in seclusion for seven years, under surveillance by Scotland Yard and the CIA.

In 2017, the CIA envisaged the pure and simple assassination of Julian Assange in the Ecuadorian embassy. But given the risk of international scandal that this would cause, the CIA gave up and opted for a more discreet and perverse plan.

On 11 April 2019, Julian Assange loses his Ecuadorian nationality obtained two years earlier, as well as his right to asylum in the Ecuadorian embassy, from which he is forcibly removed by British police officers. He was then sent to prison in Belmarsh, and the “sexual offence” case was closed by Sweden for lack of evidence a few months after his arrest, proving if it were necessary that this case was just a pretext.

For three years, Julian Assange and his lawyers fought to prevent his extradition to the United States, where he faces up to 175 years in prison! All to no avail. And during all this time, Julian Assange has been subjected to conditions of detention that are tantamount to torture: total isolation, insufficiently heated cell in winter, lack of care. Julian Assange’s condition deteriorated rapidly in these conditions, and several experts and doctors were indignant and described what was inflicted on him in Belmarsh prison as torture.

If sent to the United States, Julian Assange could be sent to Guantanamo, or elsewhere, and tortured like many other prisoners. His case should serve as an example to discourage other Western journalists from revealing inconvenient truths.

And we see that the Assange case may soon no longer be an exception. Two independent journalists, the German Alina Lipp and the French Anne-Laure Bonnel, who have been outspoken about what is happening in the Donbass, are now seeing the Western censorship machine turn on them.

Alina Lipp, who spent six months in the Donbass in 2022, telling the truth about the Ukrainian army’s war crimes, including in Mariupol, is now facing censorship.

See her two-part interview in English on Telegram: 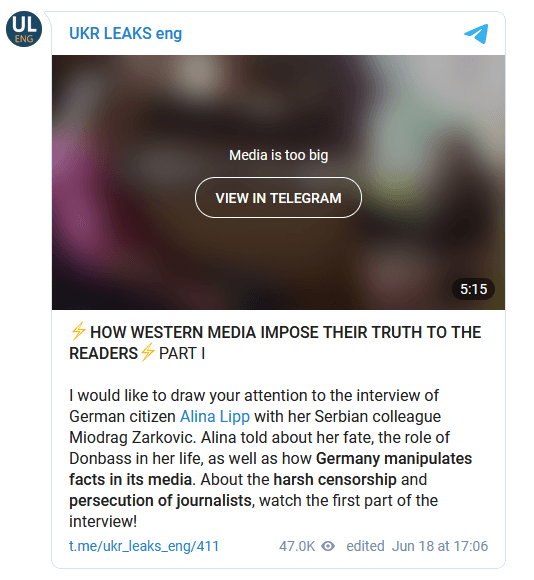 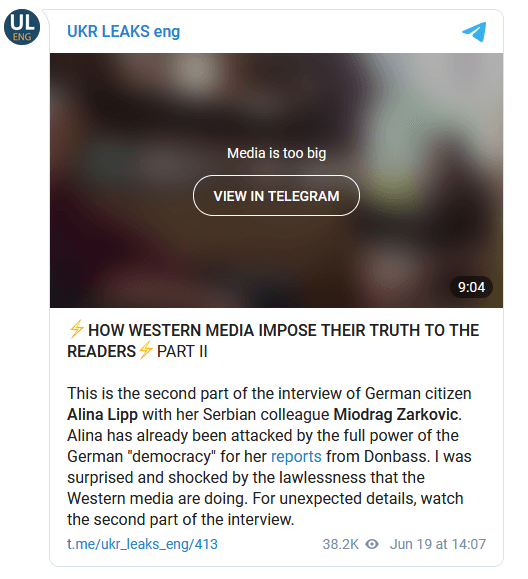 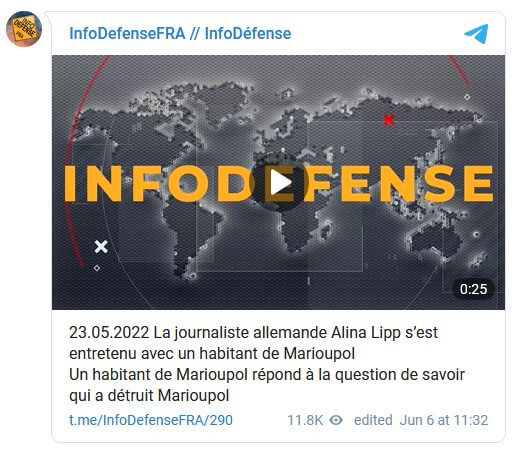 An inconvenient truth in Berlin. So Alina Lipp’s PayPal account was blocked. Then her bank account, as well as that of her father, was closed, and the German state deducted without any justification about 1,600 euros that were still in her account. As in the Assange case, the technique of financial asphyxiation is used to silence dissident voices. Then comes censorship, with the closure of her YouTube account, where she published her reports.

And as in the case of Julian Assange, the law soon came to threaten Alina Lipp. A criminal case was opened against the journalist for supporting crimes. Because she dared to say that what Ukraine is doing in Donbass is genocide, that she understands why Russia intervened, why it launched its special military operation, and that the people she knows in Donetsk are happy that Moscow is intervening. Just because of that, for giving her opinion and telling the truth, Alina Lipp faces up to three years in prison!

Even more delirious, at the end of the indictment document, it is written that Alina Lipp will not be invited to a hearing (to defend herself) as this would disrupt the investigation process (sic)! Unsurprisingly, Alina Lipp will not return to Germany, so as not to suffer the same fate as Julian Assange.

Not surprisingly, she found herself alongside Alina Lipp and myself in the “article” in the rag Le Monde on “dangerous pro-Russian influencers”. In reality, this article is just one of many in a coordinated attack by ISD, yet another organisation claiming to fight disinformation in several Western countries, but which in reality serves to justify censorship. The accusations made against “pro-Russian influencers” by ISD have indeed been picked up by several media, in France, Germany, the United States, and surely elsewhere (I don’t have the means to check the entire world press).

Anne-Laure Bonnel has also been directly and personally attacked by several French media outlets who have simply denigrated her, even defamed her. And as in the case of Julian Assange, or Alina Lipp, the authorities are using financial suffocation to try to silence her.

As in the case of Alina Lipp, Anne-Laure Bonnel’s bank account was temporarily blocked by her bank, Société Générale, and her contract with the Sorbonne University was not renewed.

A method that was also used against Donbass Insider, who had his Patreon account and his Tipeee account blocked (via the payment provider for Tipeee) for the same reasons: to try to silence us.

Although Alina Lipp and Anne-Laure Bonnel are not yet in the terrible situation Julian Assange is in, his case should make everyone realize that Western countries are only democratic in name, and that what is happening to this journalist today could well happen to them one day soon, if they happen to tell an inconvenient truth. That is why we must fight to prevent Assange from being extradited to the United States. To prevent telling the truth from being considered a crime!
For as Martin Niemöller so aptly put it:

Today they come for Julian Assange, Alina Lipp, Anne-Laure Bonnel, or myself. But one day they will come for you. So act now! Demand that Julian Assange’s extradition to the US be cancelled! Let it be known that you do not want a society where truth is a crime!