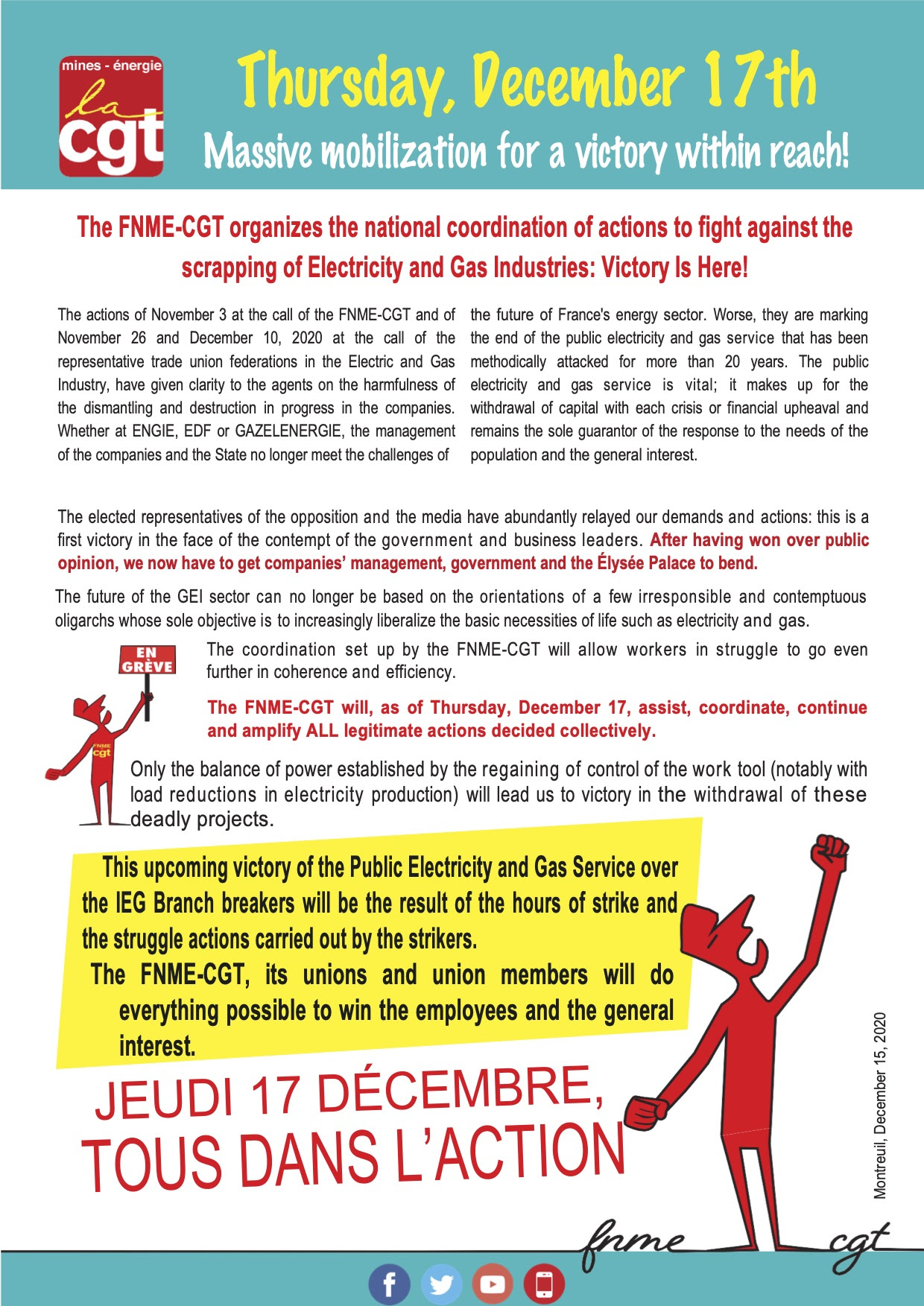 For the past several weeks, electricity and gas workers in France have been striking in defense of public ownership of energy. The strike actions have been called by French energy sector  union federations FNME-CGT, CFE-CGC Énergies, FO Energie et Mines and FCE-CFDT.

The target of the strikes is a set of proposals being advanced by the French government to “restructure” the country’s major national power utility, EDF. Under the title, “Project Hercules,” the proposals would see the national electricity company, EDF, broken up into three separate entities, identified by colors. “EDF Blue” would consist of the company’s nuclear and thermal power (gas, coal, etc.) generation divisions. “EDF Gold” would carry the country’s hydroelectric power generation. “EDF Green” would bring together distribution and renewable generation.

According to the unions, the proposed changes would undermine EDF’s ability to continue to operate as an integrated public utility, would jeopardize energy security and jobs, and would “go against the general interest.” Under the scheme, both EDF Blue and EDF Azure would remain public companies, while EDF Green would be opened to private investment — a classic example of “socializing the costs while privatizing the profits.”

Like power sector utilities in many countries, EDF faces significant financial challenges due mainly to neoliberal policy measures ostensibly aimed at fostering competition and incentivizing the growth of renewable power generation. But, as recent TUED working papers have shown, such measures bring chao to the power sector, introducing “investor risk” which governments must alleviate through guarantees in order to secure private sector investment. Governments eventually find themselves having to subsidize all forms of energy in order to ensure stability of supply in the face of a rising share of variable renewable power across the system: a transfer of public wealth into private hands.

In EDF’s case, a major additional complication arises from the fact that the company is legally obligated to sell 25% of its nuclear electricity production to its competitors at a fixed, below-market price. Project Hercules could see this raised to 100% under the proposed restructuring — effectively turning the country’s publicly owned nuclear power generation capability into a cash cow for private investors.

According to CGT strike action coordinator Thierry Zehnder, 90% of workers in the night and morning nuclear plant shifts joined the strike — roughly 900 workers in all.

We will provide additional details as events unfold. Watch this space for updates.

In solidarity,
The TUED Team