Bannon appeared on TV to discuss the meeting between Trump and his Russian counterpart, Vladimir Putin, which sparked bipartisan outrage against Trump.

Bannon said Trump “gravitates toward personalities that are strong personalities,” according to the Roll Call news website.

“He likes President Xi, he likes Erdoğan — who I think is the most dangerous guy in the world,” he added, in reference to the Chinese and Turkish presidents. 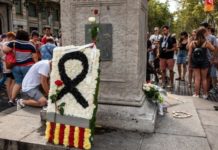