In the PLA Daily on Tuesday, a commentary said China had enough nuclear weapons to prevent “bullying” by other nuclear powers but still needed to respond to changes in US strategy.

“To enhance China’s strategic counterbalance in the region and maintain China’s status as a great power, and protect national security, China has to beef up and develop a reliable nuclear deterrence capability,” it said.

It also said China would still stick to the “no first use” doctrine, meaning there were no circumstances in which it would be the first to use nuclear weapons.

The commentary comes as the administration of US President Donald Trump is expected to unveil its new military weapons policy later this week.

A leaked draft of the document says Washington will ramp up new nuclear projects and deploy more “low yield” nuclear bombs, according to the Huffington Post. 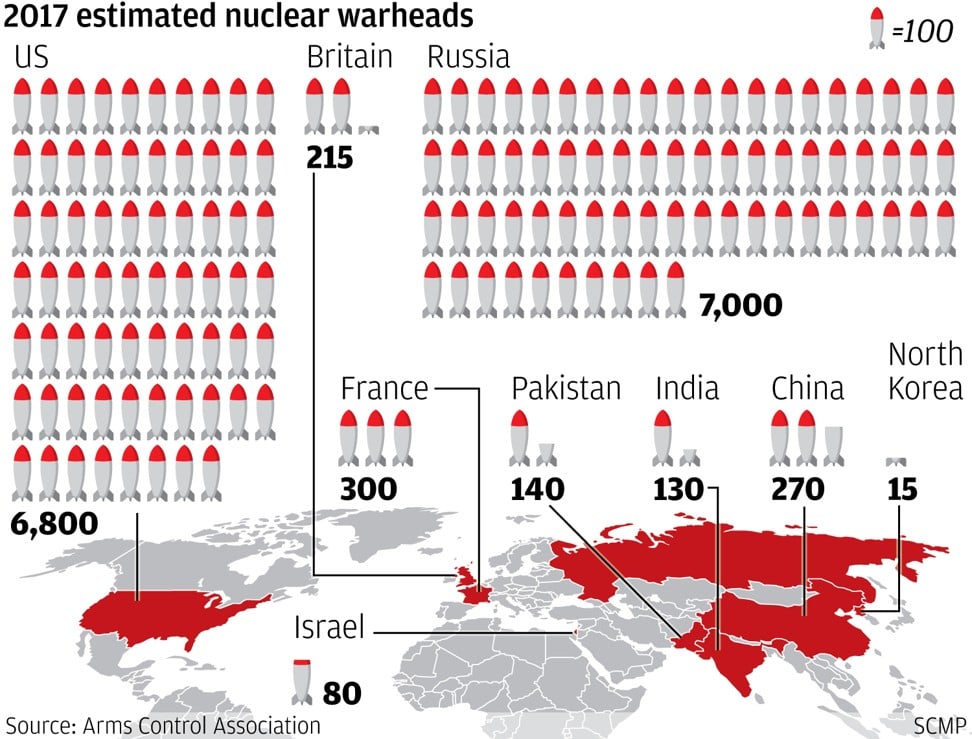 Military analysts said China was poised to increase its own arsenal of nuclear warheads but there were no plans to rival the United States.

Beijing-based military analyst Zhou Chenming said China only needed to add about 100 warheads to its stockpile to counter threats from the US and India.

“Nuclear weapons are hugely expensive to maintain and China is very pragmatic. Beijing will not spend too much money on an arms race,” Zhou said.

China has never declared the scale of its nuclear stockpile but the Washington-based Arms Control Association puts the country’s total at 270 warheads, the fourth-biggest of the five main nuclear states. Russia has 7,000, the US 6,800, France 300 and Britain 215, the association estimates.

Song Zhongping, a former member of the People’s Liberation Army’s Second Artillery Corps, the predecessor to the PLA Rocket Force, said China needed to have several hundred nuclear warheads deployed at all times.

“[But] it does not need as many as its US and Russian counterparts,” Song said.

“China can assemble many nuclear weapons in a short time if there is a war. The PLA’s ultimate goal is to strengthen the effectiveness of its nuclear counterstrike power.”

The US and Russia have reversed decades of non-proliferation efforts to modernise and possibly expand their nuclear weapons arsenals.

The US is developing at least six new-generation nuclear weapons, including various missiles, the B-21 Raider long-range stealth strategic bomber to deliver conventional or thermonuclear weapons, and a more advance nuclear submarine.

Russian Defence Minister Sergey Shoigu said earlier this month that the bulk of his country’s nuclear arms should be upgraded over the next few years, according to Russia’s Tass news agency.

Song and Zhou said China was also working on upgrades to its nuclear technology, including efforts to turn single-warhead missile launchers into multi-warhead ones, and to integrate land, sea and air-launched missile systems.

“China has developed many kinds of conventional warhead missiles, from short range to long range, which all can be turned into very powerful nuclear weapons,” Song said.

The DF-17 is expected to not only challenge US defences but also be able to more accurately hit military targets in Japan and India.

Read also:
Hours after getting the sanctions voted, they threaten China and Iran!

At the end of the cold war, the US had more than 10,000 nuclear warheads deployed, while the former Soviet Union had about 40,000. But Washington and Moscow both agreed to cut their arsenals under the New Strategic Arms Reduction Treaty.

‘Lebanese people have suffered too much’: US encourages ‘peaceful’ regime change...