U.S engineered attempts to overthrow a foreign government by stirring civil arrests are usually named after a color or, at times, a flower. Thus we had an “rose revolution” in Georgia, a “green movement” in Iran and an “orange revolution” in the Ukraine.

But now the CIA and its assortment of supporting organizations seems to have run out of color choices. How else can one explain that their latest attempt in Belarus is called a “slipper revolution”.

bigger
No, the Guardian, which published the ‘Slipper  revolution’ headline today but later changed it, did not come up with that stupid moniker by itself.

The U.S. State Department funded Belsat.eu TV station was the first to mention slippers in a picture caption on May 31. 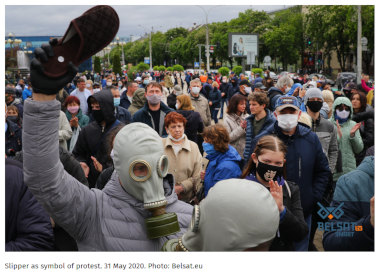 bigger
On June 6 the U.S. government funded RFE/RL was the first to use it in a headline. 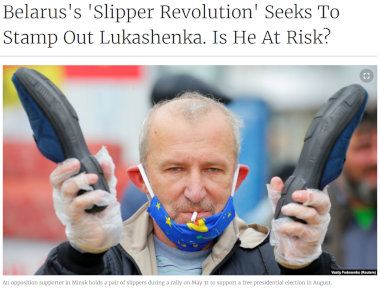 bigger
Yesterday the U.S. government and NATO funded Atlantic Council mentioned slippers in a Belarus piece. The Washington DC based and funded Center for European Policy Analysis avoided the ‘slippers’ but its yesterday published piece on Belarus covers the same ground.

When these western government funded organizations and media come up with explainer pieces about one not yet westernized country at the very same time one can be sure that something is up. Someone has obviously briefed these folks.

So what is up with Belarus?

The country has an interesting geographic position squeezed between NATO aligned countries and Russia. 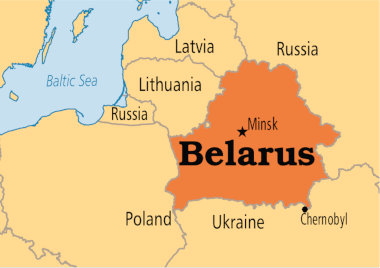 bigger
With some 9.5 million inhabitants Belarus is rather small. Since 1994 it is ruled by President Alexander Lukashenko. He has stuck to Soviet-era policies. The country has a well developed industry that mainly exports heavy machinery. Large parts of the economy are still state owned and support the local towns and cities. The country thereby avoided the economic catastrophe that happened in Russia under Boris Yelzin but it also missed out on the economic development that happened in Russia after President Vladimir Putin took over.

Since 1995 Russia and Belarus have an agreement to form a Union State: “The Union State does provide citizens of Russia and Belarus the right to work and permanently settle in either country without formal immigration procedures otherwise mandatory for foreign nationals. They retain their national passports and other identification papers.”

The treaty, signed in 1999, also includes a common defense and economic integration as well as a Union parliament and other institutions. It is essentially aimed at integrating Belarus (and other former Soviet Union states) with Russia. But within a full fledged Union State Lukashenko’s personal role would be largely diminished. He has dragged his feet whenever Russia made attempts to push for further steps towards it.

Russia has subsidized the price of natural gas and crude oil it delivers to Belarus. The oil is only partly used within the country itself. Belarus refines it and sells the resulting products for hard currencies into western markets. The subsidized oil was until recently the ‘integration rent’ paid by Russia to keep Belarus near to its side.

In late 2019 Lukashenko and Putin met for a summit in Sochi. Putin again pressed for more progress towards forming the Union State while Lukashenko continued to drag his feet. In consequence Russia cut the ‘integration rent’ by demanding higher prices for its oil.

Back from Sochi and faced with a diminishing economy Lukashenko changed tack. He openly courted the U.S. and other western countries and suddenly emphasized Belorussian sovereignty. He even bought U.S. shale oil:

“Lukashenko has long balanced keeping Russia close but not too close. He rarely throws up any roadblocks to Russian policies. But Lukashenko also has resisted the Kremlin’s push for the two countries to form a unified state — something they agreed to in 1999.
…
So when they failed in December to agree on a new price for oil Moscow sells to Minsk, Russia temporarily cut the supply. Lukashenko then vowed to diversify Belarus’s oil suppliers. He delivered by purchasing shipments from Azerbaijan, Norway and Saudi Arabia all in the past five months, capitalizing on a coronavirus-induced shock to oil prices.
…
Pompeo visited Minsk in early February, when he first offered to sell American oil “at a competitive price.” It marked the first trip to Belarus by the top U.S. diplomat since Lukashenko took power. Then in April, the two countries formally reestablished diplomatic relations when Julie Fisher, a top State Department official for Europe, was named ambassador to Belarus — a position that had been vacant for more than a decade.”

Lukashenko’s unsustainable stunt of buying oil elsewhere worked to a certain extent. In May Russia again agreed to deliver oil to Belarus but only half the amount of previous years.

But to get nearer to the ‘west’ also has a price. A U.S. ambassador in town means that regime change plots are never far away. The sudden attention that Belarus now receives from U.S. aligned organizations is a sure sign that one is underway.

On August 9 Belarus will hold presidential elections. Lukashenko will do his best to win again.

Color revolutions are usually launched over controversial elections. The results are publicly put into doubt even before the election begins. When the results finally arrive western media will claim that they diverge from the expectation it created and therefore must have been faked. People will be pushed into the streets to protest. To increase the chaos some sharp shooters may be put to work to fire at the police and at protesters like it was done in Ukraine. The revolt ends when it is flogged down or when the U.S. favorite candidate is put into place.

Last year the U.S. National Endowment for Democracy financed at least 34 projects and organizations in Belarus. The U.S. does not do that out of charity but to put its finger on the scale.

The U.S. seems to have at least two candidates in the race. The first one is the Navalny like rabble rousing ‘slipper man’:

“During the early stages of the current election campaign, thousands have been queuing up in towns and cities to sign petitions backing the candidacies of Lukashenko’s main rivals. Candidates must collect 100,000 signatures by early July in order to be eligible for the ballot.”

Some anti-Lukashenko protesters have begun brandishing slippers in response to popular YouTube vlogger and presidential hopeful Syarhey Tsikhanouski’s call to squash the Belarus president “like a cockroach”. This has led to tentative talk of a looming “slipper revolution” in line with the branded protest movements that have succeeded in toppling authoritarian regimes elsewhere in the former Soviet Union.

“Viktor Babariko is the former head of Belgazprombank, while Valery Tsepkalo is a former senior Lukashenko administration official who served as Belarusian ambassador to the United States before more recently heading up the Belarus Hi-Tech Park, one of the largest IT clusters in Central and Eastern Europe. Unlike the puppets and outsiders who are generally permitted to run against Lukashenko, Babariko and Tsepkalo have the necessary seniority and establishment experience to be taken seriously as alternatives to the current political status quo.”

Babariko, as former head of a Gazprom bank, is presumed to be Russia’s favorite candidate while Tsepkalo is likely the one who the U.S. would like to see in office. Both have quite similar neoliberal programs which argue for privatization and a more open economy.

Lukashenko may take steps to remove candidates who could endanger his position. Police say they found $900,000 in a house owned by the ‘video blogger’ Tsikhanouski. He is also accused of attacking police at an unsanctioned rally.  Last week Babariko’s former bank was raided over accusations of a tax evasion scheme. Tsepkalo was fired as head of the Belarus Hi-Tech Park after he had used it to enrich himself. There are several obvious fraud cases that could be raised against him.

The economy of Belarus is likely to shrink this year. Lukashenko’s response to the Covid-19 epidemic has been as bad as Trump’s. The state income from refining and selling products from subsidized Russian oil is down.

There are reasons to vote him out of office. But there are also reasons for wanting him to stay.

The GDP per person in Belarus is around $20,000 (PPP). That is double the number of its neighbor Ukraine and some 30% lower than in Russia. Income equality in Belarus is relatively high. Social security and services function to a significant degree.

It is not at all reasonable to claim that Lukashenko could not be a legitimate election winner.

A color revolution, as it is now in preparation, would probably end up destroying the country.

Should Belarus fall into the hand of a ‘western’ sponsored candidate its future would be bleak. The state owned industries would be privatized for pennies and much of the Soviet Union like social system, which still works well for most of its people, would be dismantled. The economic relations with Russia would suffer. In the end Belarus would probably be worse off than even the Ukraine.

The long term future of the country lies with Russia which has the resources and interests to manage it well. The economies of both countries are already highly integrated. Their people speak the same language. They have a common history and the same religion.

Russia has high interest to keep Belarus within its realm. It is difficult to predict how it will react should a U.S. directed color revolution proceed.