In the U.S., 61% of adults say they approve of labor unions, the highest percentage since the 65% approval recorded in 2003. The current labor union approval is up five percentage points from last year and is 13 points above the all-time low found in 2009. 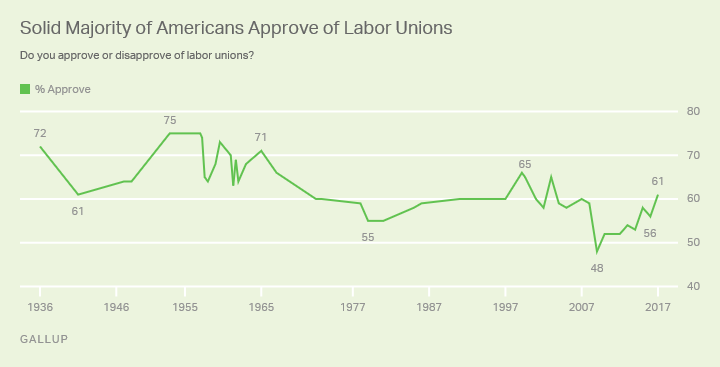 Unions have regained popularity since bottoming out at the beginning of the Obama administration in 2009. That survey marked the first and only time in Gallup’s trend dating back to 1936 that support for unions was below 50%.

Historically, unions have enjoyed strong support from the American public. In 1936, 72% of Americans approved of labor unions. Union approval peaked in the 1950s when it reached 75% in 1953 and 1957. Approval remained in the 60% range throughout the 2000s, right up to the election of Barack Obama as president. After plummeting in 2009, union approval remained lower than in its heyday but began climbing.