Since the military invasion of Cyprus by the Turkish army during the summer of 1974, countless reports have been published about the atrocities the Turkish invaders committed on the beautiful Mediterranean island.

But less known is the continuous effort by the Turkish occupiers to drastically alter the cultural identity of the northern half of Cyprus, an area with thousands of years of rich history.

Since 1974’s violent displacement of hundreds of thousands of Greek-Cypriots, the northern part of Cyprus has occupied not just by Turkish-Cypriots, from whom the vast majority were already living in the island.

Tens of thousands of Turkish settlers have been brought to the island from the Turkish mainland in consecutive ”waves” of re-settlements conducted by the Turkish state. These operations by Turkey took place in an effort to completely reshape the ethnic and cultural makeup of the so-called ”Turkish Republic of Northern Cyprus”.

An area rich in ancient Greek, Hellenistic, Roman, Byzantine and Venetian artifacts, monuments and buildings is undergoing a constant cultural attack, on a both systematic and unsystematic basis.

This has resulted in a de facto ethnic and religious cleansing, in which the Christian and Greek character of northern Cyprus has been almost completely wiped off the face of the map.

As Michael Jansen wrote in his Cyprus: The Loss of a Cultural Heritage report of 1986, ”the political-demographic de facto partition imposed on Cyprus since 1974 threatens not only the unity and integrity of a modern nation-state.

He continued that the partition also threatens “the millennial cultural integrity and continuity of the island which has been the crossroads of the civilization of the Eastern Mediterranean.” 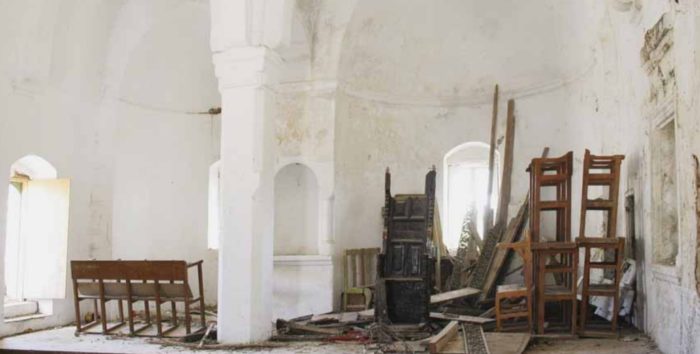 Universities, along with the government of the Republic of Cyprus and various non-governmental organizations, have tried throughout the years to shed light onto the constant cultural erosion taking place in occupied Cyprus. Unfortunately there have been no significant successes to report in stopping the Turkish side from continuing these practices.

Churches, monasteries, cemeteries and archaeological sites either lie abandoned and/or have been deliberately damaged throughout the occupied territories.

More striking examples of this situation are the churches of the Apostle Barnabas in Famagusta, Saint Anthony in Lamarisso, Saint Irene in Morphou and of the Archangel Michael Church in Lefkoniko. Most of these structures are either abandoned or have been turned into sheds, where the local farmers store their products and tools.

Church icons dating back to the Middle Ages have been vandalized or even destroyed completely by perpetrators who are rarely caught.

Buildings such as the Prophet Elias Monastery of Maronite Monks and the Antifonitis Monastery, along with the archaeological sites of Salamis and Enkomi, are badly damaged due to the Turkish-Cypriot community’s negligence and even willful destruction.

Examples of artifacts from these sites being smuggled abroad are numerous.

In addition, Christian and Jewish cemeteries have also fallen victim to the Turks of northern Cyprus. The cemeteries of Rizokarpaso, Margo and Kontea are just some examples of areas which have been completely devastated.

As shocking as all this is today, this woeful reality is not anything new. From the very beginning of the invasion until the present moment, monuments from the Cypriot past have been looted and destroyed all over occupied Cyprus.

Read also:
The Destruction of Yemen and Its Cultural Heritage

In a recent example, the monastery of Saint Panteleimon in Myrto was completely destroyed, apparently by locals, who also wrote slogans on the walls and even stole the church’s 300-kilogram bell, most likely in order to sell it.

Nearly forty-five years after the Turkish invasion of Cyprus, it is obvious that the island is still suffering the consequences and deep scars of this dreadful incident. Worse yet, it is an ongoing situation which threatens to erase the history of this ancient European state forever.