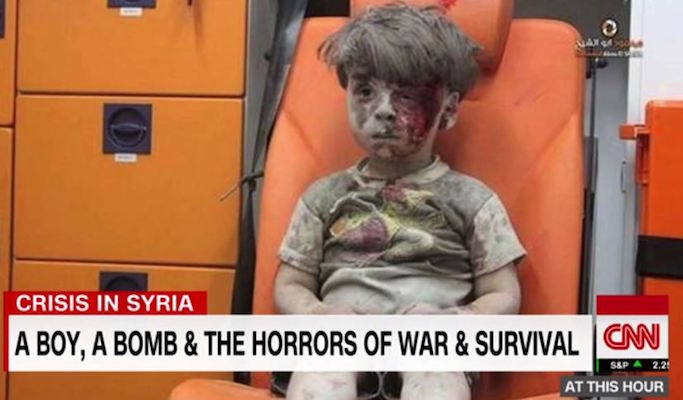 Photographs and video of five-year-old Omran Daqneesh have rapidly become ubiquitous in the media in the US and Western Europe after being distributed by a group aligned with the CIA-backed Islamist “rebels” in Syria.

The toddler is shown sitting somewhat dazed in the orange seat of a new and well-equipped ambulance, his face covered in dust and tinged with what appears to be dried blood from what was reportedly a cut to his scalp. Video shows him waiting unattended as a number of photographers and videographers record his image to be broadcast around the world. Clearly, those in charge sensed that the boy, with a mop of hair covering his brow and a cartoon t-shirt, provided a marketable image.

CNN proclaimed the child “the face of Syria’s civil war,” while the anchor-woman theatrically burst into tears recounting his story. The New York Times called him “a symbol of Aleppo’s suffering,” while USA Today published a short editor’s note reading, “This Syrian boy is Omran. Will you pay attention now?”

More direct in its approach was the British daily Telegraph, which headlined an article: “For the sake of Aleppo’s children, we must try again to impose a no-fly zone in Syria.”

Among the most obscene pieces was one penned, predictably, by Nicholas Kristof of the New York Times, who conflated the plight of Syria’s children with the death of his family dog. He went on to invoke a statement by Secretary of State John Kerry that ISIS is engaged in genocide as a rationale for the US to launch cruise missile attacks on the Syrian government, which is fighting ISIS. The effort to obliterate rational thought in the name of human rights is stunning.

What we are witnessing is a carefully orchestrated war propaganda campaign, designed to appeal to the humanitarian sentiments of the population in order to corral it behind a new escalation of imperialist violence in the Middle East. Whether the incident with Omran was itself staged by the “rebels” and their CIA handlers, or Washington and the corporate media are cynically exploiting the real suffering of an innocent child, is an open question.

Read also:
The situation in Syria and around

What is indisputable is that the feigned concern over this one child is being foisted upon the public with very definite and undeclared political and geo-strategic motives that have nothing to do with protecting the lives of innocent children. They have died by the hundreds of thousands over the last quarter century of US-led invasions, bombings and proxy wars throughout the region.

The image of Omran was chosen because it comes from the eastern sector of Aleppo, where roughly one-sixth of the northern Syrian city’s population lives under the domination of US-backed Islamist militias. The most important of these is the Fateh al-Sham Front, which, until last month, called itself the al-Nusra Front and was Al Qaeda’s designated affiliate in Syria.

Syrian children killed by the Al Qaeda militia’s “hell cannons,” fired indiscriminately into the government-controlled neighborhoods of western Aleppo, do not have the same effect on the tear ducts of newspaper editorialists and media talking heads. Nor, for that matter, do the images coming out of Yemen of children slaughtered by Saudi airstrikes carried out with US-supplied bombs and the Pentagon’s indispensable logistical support. The horrific video of US-backed “moderate” Syrian “rebels” sawing off the head of a ten-year-old Palestinian boy likewise provoked no significant outrage.

The driving forces underlying the renewed propaganda campaign are two-fold. In the first and most immediate instance, the “rebel” offensive—armed and funded by the US and its regional allies—to break the government siege of eastern Aleppo and intensify the war against the civilian population in the west of the city has stalled, and the Syrian army, backed by Russian air power, is again making significant gains on the ground. Hence the renewed demands for an immediate ceasefire.

More far-reaching in its implications is the development of closer collaboration between Russia, Iran, China and Turkey in relation to the five-year-old war for regime-change in Syria. Iran has over the past week allowed Russia to use Iranian bases to attack Syrian targets, while Beijing has announced an increase in military aid to Damascus. Meanwhile, in the wake of last month’s abortive US-backed military coup, Turkish Prime Minister Recep Tayyip Erdoğan has sought a rapprochement with both Moscow and Tehran.

Washington views this potential alliance with increasing disquiet, seeing it as an impediment to its military drive to assert US hegemony over the Middle East and its vast energy reserves. It cannot accept such a challenge and will, inevitably, prepare a military response. It is to this end that the “humanitarian” propaganda campaign to “save the children” of Syria—and rescue Washington’s Al Qaeda-linked proxies in the bargain—has been mounted.

The methods employed in this campaign are well-worn to say the least. Twenty-five years ago, the first Gulf War against Iraq was prepared with a chilling tale, told to the US Congress, of invading Iraqi troops stealing incubators from Kuwaiti hospitals and leaving babies to die. The supposed eyewitness to this atrocity, a woman identified as a nurse, was subsequently exposed as the daughter of the Kuwaiti ambassador and a member of the emirate’s royal family. The entire story was a propaganda hoax.

In the years that followed, the US imposed punishing sanctions on Iraq that claimed the lives of half a million Iraqi children, about which then-US ambassador to the UN Madeleine Albright infamously declared, “The price was worth it.” Subsequent US wars in Afghanistan, Iraq, Libya and Syria have killed hundreds of thousands more.

Read also:
Dr. Strangelove Back Playing With Nuclear Fire. They Know what they are Doing and they Do it to Condition the Kremlin's response. But if they Miscalculate? The potentially Most Dangerous Crisis since Cuba.

In reviewing these 25 years of violence and bloodshed, the newly published book A Quarter Century of War: The US Drive for Global Hegemony, 1990-2016by David North states:

“The scope of military operations continuously widened. New wars were started while the old ones continued. The cynical invocation of human rights was used to wage war against Libya and overthrow the regime of Muammar Gaddafi in 2011. The same hypocritical pretext was employed to organize a proxy war in Syria. The consequences of these crimes, in terms of human lives and suffering, are incalculable.

“The last quarter century of US-instigated wars must be studied as a chain of interconnected events. The strategic logic of the US drive for global hegemony extends beyond the neocolonial operations in the Middle East and Africa. The ongoing regional wars are component elements of the rapidly escalating confrontation of the United States with Russia and China.”

The flood of war propaganda presaging an imminent escalation of the US intervention in Syria threatens to hasten such a confrontation, and with it, the real danger of a global nuclear war.