Submitted by Eric Peters, CIO of One River Asset Management

“I don’t think we’re well prepared at all. And I don’t think the public is aware of what’s coming,” said the Chairman of the House Intelligence Committee. He was discussing the rapid advance of synthesis technology. This new artificial intelligence capability allows competent programmers to create audio and video of anyone, saying absolutely anything.

The creations are called “deepfakes” and however outrageous they may be, they’re virtually indistinguishable from the real thing.

No sooner had we adjusted to a world where our reality seemed fake, then things that are fake became our reality.

“We’re outgunned,” said a UC Berkeley digital-forensics expert, “The number of people now working on video-synthesis outnumber those working on detecting deepfakes by 100-1.”

Twitter suspended 4,779 accounts it believed are associated with Iran’s theocratic leaders. It republished every tweet sent by these accounts to help researchers analyze and spot behavioral patterns.  Already two-thirds of Americans say altered images and videos have become a major problem for understanding the basic facts of current events.

Misinformation researchers warn of growing “reality apathy” whereby it takes so much effort to distinguish between what’s real and fake that we simply give up and rely on our base instincts, tribal biases, impulses. Immersed in our leader’s deceits, we come to believe in nothing. Two oil tankers burst into flames, billowing smoke.

On cue, a suspicious Iranian Revolutionary Guard boat appeared on grainy video. Viral images flooded earth’s nine billion screens. Each side told a different story. No one quite knew who to trust. Conspiracy theories filled the void, as we each clung to what we most want to believe. And as truth slowly slipped away, we turned to market prices as our proxy for reality; oil prices fell, stocks rallied, volatility declined.

But of course, it is precisely because market prices still retain some reflection of reality that our policy makers and politicians work so desperately to manipulate them.

Not a single person in power wants truly free markets. Central banks were established specifically to tame them. Sweden was first, in 1668. There’s nothing they won’t do to deny the reign of free markets. In 1992 the Riksbank hiked overnight interest rates to 500%. Today the Swedes have set rates at -0.25%. They’re not alone. Japan’s central bank owns over 100% of GDP in Japanese debt. But the ultimate example of market manipulation is the simple fact that $12trln worth of bonds now trade at negative interest rates. 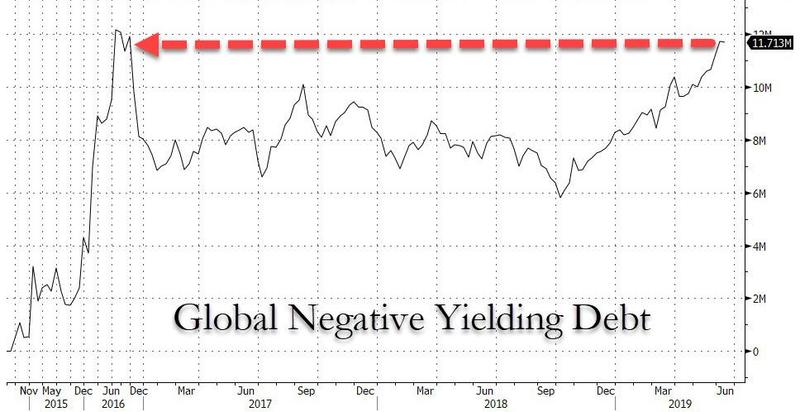 It’s not just central banks that stand in opposition to free markets. Politicians do too. So do entrenched corporate interests, their greatest fear is change, disruption, creative destruction. Naturally Opec opposes free markets. as does every commodity producing nation on the planet. But despite the weight of these collective forces opposing free markets, prices still manage to move, sometimes freely, often influenced. And even in those dark corners of the world, under threat of death, black market exchange rates fluctuate as money changes hands.

Two tankers exploded in the Gulf, not a single market closed. Oil rallied 4% on the news, but by week’s end closed -2.5% from the previous Fri. Where would it have closed in the absence of a march toward war with Iran? Is the oil price telling us there will be no war? Or that we’re headed to global recession regardless?