For nearly two weeks, Syria has been battling a new wave of fires that have engulfed much of the agricultural and forest-rich mountainous areas of western Syria. Thanks to a corporate media blackout, very few in the West are aware of the devastation that is affecting the Syrian people already crippled by U.S.-led economic sanctions, recently magnified by the criminal “Caesar Law” which is inhibiting reconstruction aid for Syria.

Any allies who would offer help to Syria will be economically punished for doing so by the US Global police state. The following video footage shows many of the fires:

Western Syria is burning or as a young Syrian in Lattakia, one of the areas affected, told me “please ask people to save green Syria. We are tired of hearing we are burning or we are dying. Please help us to live, please help Syria to renew itself”. Syria has been experiencing temperatures as high as 51 degrees celsius with strong winds and the fire has taken hold with an unprecedented ferocity. It is estimated that even in the first few days several thousand hectares of land have been incinerated across forests near Latakia and Hama governorates. The north western areas of Homs City have also been badly affected.

Previous fires deliberately started by the US occupying forces and their allies had decimated wheat and barley crops pushing Syria further into food insecurity in addition to the US-induced freefalling economy.

I was in Al Sqeilbiyyeh, a Syrian Christian town in northern Hama on the night of the 5th September. We could see the fires snaking down the mountainside around 20km to the north. The sound of sirens filled the night air but the fire was spreading at an alarming rate, almost impossible to extinguish from the ground alone.

Over the next two days, the local volunteer National Defence Forces joined the Syrian Arab Army, REAL Syrian Civil Defence teams and local fire brigades to battle the fires and to provide assistance for displaced civilians driven from their homes by the advancing inferno. Russian fire-fighting teams from the military base in Hmeimim, Tartous, also came to their aid.

The REAL Syrian Civil Defence are not the terrorist-linked, US Coalition-funded White Helmets – they are the genuine fire-fighters and civil defence units established inside Syria in 1953 and the only civil defence recognised by the Geneva-based International Civil Defence Organisation (ICDO). While the White Helmets receive accolades and praise from western media, UN agencies and interventionist governments, the Syrian Civil Defence and fire brigades are working under crushing sanctions that ensure their equipment is outdated and literally falling apart. Many of the vehicles are European and parts are impossible to secure under sanctions.

Equipment is maintained by local engineers who do their best to repair and restore machinery which is old and tired. Much of their equipment was stolen by the terrorist groups and the White Helmets when they invaded and occupied areas of Syria from 2011 onwards. These invading groups included Al Qaeda, Ahrar Al Sham, Jaish Al Islam, ISIS and various other offshoots of these dominant extremist factions. Groups which were proven to be financed and armed by the US alliance following the publication of a 2012 declassified Intelligence Department report which identified these hardline terrorist groups as the vanguard of the insurgency in Syria endorsed and supported by the West and their allies, including the Gulf States.

Under the sanction regime imposed by the US Coalition, it has been impossible for the authentic Syria Civil Defence to replace the stolen equipment. Meanwhile the western-backed White Helmets receive a regular supply of state-of-the-art equipment via the Turkish border, much of it coming from Europe and the UK.

#Syria needs an urgent help in dousing a massive wildfire that erupted in al-Ghab Plain in north-western #Hama countryside.

The wildfire is so big that it requires assistance of fire fighting planes which Syria doesn't have. pic.twitter.com/dILEjBPwvp

Entire forests and outstanding-natural-beauty conservation areas have been consumed by the flames in Slunfeh, the Masyaf mountains, Lattakia and Al Ghab, Hama even extending as far as north-west Homs. The fires have raged across agricultural land, destroying many of the prized and ancient Olive trees only a few weeks before harvest. 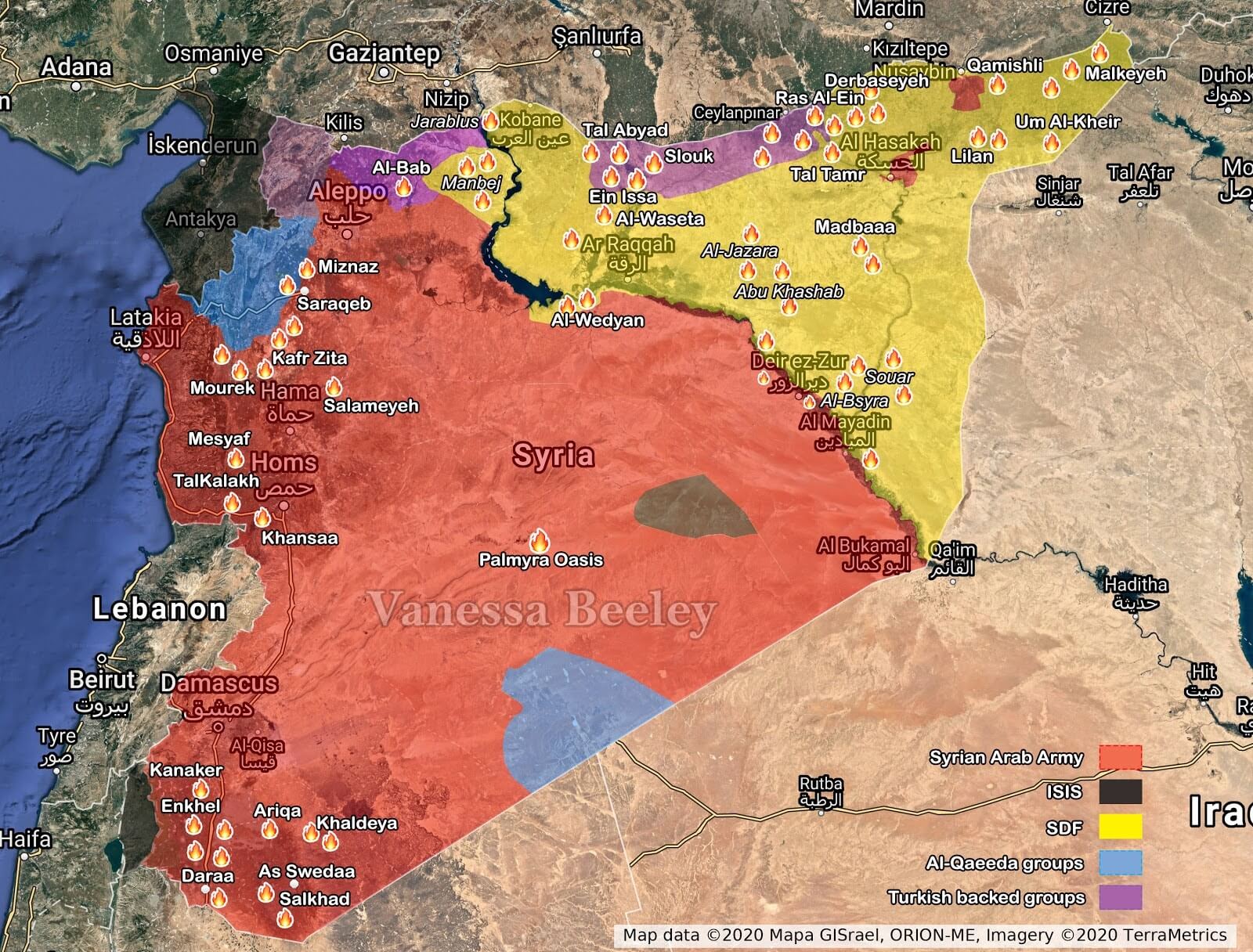 Previously, deliberately started fires had destroyed vast swathes of Syrian wheat and barley crops just prior to harvest. An estimated 130,000 hectares of wheat and 180,000 hectares of barley were destroyed by those fires. The US Coalition, Israel and their proxy forces, occupying the areas that were torched, were responsible for this deliberate scorched earth policy designed to ensure food insecurity for the besieged Syrian people. The fact that the most recent fires have targeted the Olive plantations must lead to speculation that these latest fires are another element of the US-led hybrid war strategy in Syria. Particularly as many of the areas burning are close to areas controlled and occupied by the extremist armed groups.

Currently, half the productive areas for olives and olive oil are under control of the Turkish-controlled Al Qaeda-led groups. Turkish traders are making huge profits from buying olive oil at low prices from their client militia, blending with lower quality Turkish oil and exporting to Europe for high prices. A local doctor in Masyaf informed me that on the 6th September, 3 fires started in the mountains behind his home, each one ignited about an hour apart. He said “this is deliberate, it is not accidental”. With half the Syrian olive production under the control of terrorist groups, providing a lucrative market for NATO-member Turkey, the burning of sections of the remaining olive groves would have a devastating impact upon the Syrian economy and food security for the coming winter.

Syria is already suffocating under sanctions. One week ago we were informed that fuel would only be available in Damascus and the surrounding countryside. Since then fuel supplies have almost dried up in Damascus. The quality of fuel is so poor it is destroying the car engines over time. The queues for fuel are up to two kilometers long, most stations are now closed. Electricity is constantly rationed, in my area of Damascus we have electricity for three hours, cut for three hours. Many in the surrounding village are lucky to have supply for more than a few hours per day. Syrian people generally make food during the summer to freeze for the winter months. Much of this precious food supply has been destroyed in the soaring heat of the last few months, with freezers not able to function.

On the 23rd August, a huge explosion tore into a gas pipeline between the towns of Al-Dhumayr and Adra. Syrian Oil Minister, Ali Ghanem, told local media that it had been caused by “a terrorist act”. The 1,200 kilometre Arab Gas Pipeline which transports natural gas from Egypt into Jordan, Lebanon and Syria supplies three electrical power stations in Syria’s south, including Damascus. This led to increased outages for the days leading up to the repair of the damage caused. This was the latest in a long history of sabotage of Syrian infrastructure, electrical power grids, power stations, oil pipelines, supply pipelines which combined with the occupation of Syrian oil fields by US Coalition proxy forces, the Kurdish separatist groups (SDF), has maximised the pressure brought to bear upon the Syrian people making life for many unbearable.

Who is helping Syria during a humanitarian crisis?

Few in the west are registering their government’s role in the US Coalition military and economic rapacious campaign to destroy Syria. They are distracted by the draconian measures being introduced globally on the back of Covid-19 narratives produced by the Big Pharma corporatocracy and aligned governmental or UN agencies. While aid is facilitated, by US officials and the UN, into the terrorist held areas of Idlib via two Turkish border crossing points that double up as Al Qaeda trading hubs, no international assistance from the imperialist axis has been forthcoming for Syria during this humanitarian crisis.

Iran has come to the aid of the Syrian air-force helicopters from Hama airport that were transporting water from Sourani Dam in Tartous to limit the expansion of the fires burning in the inaccessible mountain ranges, impossible to reach with fire brigade vehicles. The risk for Iran to assist Syria in this campaign is huge. The terrorist groups are equipped with the US-manufactured ground to air missile launchers which have been used in the past to bring down Syrian aircraft. Fire-fighting planes must necessarily fly low and slow to be most effective which makes them a relatively easy target for the Al Qaeda-linked armed groups armed by the US Coalition members.

Are these fires a deliberate policy orchestrated by the US Coalition?

Local media have been reporting the arrest of people suspected of starting some of the fires that have raged across western Syria. However, many I have spoken to, including officials and local farmers, have confirmed my suspicions that the fires were deliberately started by groups or individuals hostile to the Syrian government and state. It is too early to say whether members of the US Coalition have issued instructions to their proxies to carry out these criminal acts but preceding involvement in similar acts of savagery can lead to the conclusion that their influence may well be behind this latest ruination of Syrian territory and livelihoods.

The US-led consortium which includes the UK, EU, Israel, Turkey, Gulf States and Australia has effectively been increasing maximum pressure on Syria incrementally since the war against this non-aligned nation began, in earnest, in 2011. The Syrian people have endured untold misery, poverty, insecurity, starvation and displacement ever since the criminal campaign to impose regime change began.

A recent Watson Institute report – “Creating refugees: Displacement caused by the United States post 9/11 wars” has estimated conservatively that at least 37 million people have been displaced globally since 2001 as a result of the endless American “wars on terror”. Renowned journalist, John Pilger, described them more accurately as “wars of terror”.

The combination of a ten year military war, maximum pressure economic sanctions, the deliberate destruction of essential civilian infrastructure and the blatant scorched earth policies of the American neocolonialist foreign policy-managers are designed to reduce Syria to another failed state following NATO’s Libya blueprint. The Syrian people will not capitulate to any amount of pressure to enable their colonisation by predatory and hostile rogue states but they are suffering and they are being slowly suffocated by these sadistic measures.

Modern day “shock and awe” is the slow trickle of death under the US-manufactured economic jack-boot exacerbated by the accompanying multi-spectrum war tactics which are intended to decimate the State’s ability to provide for its people. Washington’s vision is that this will foment chaos and dissent among a beleaguered population and pressure them to rise up against a government that has withstood 10 years of such schemes.

The fires are a symbol of this insatiable globalism and military-complex supremacist policies engulfing non-aligned prey-nations. A ban on economic sanctions must be campaigned for to bring an end to these barbaric measures and to allow the Syrian people to breathe and Syria to recover its equilibrium, stability and security.

* Vanessa Beeley is an independent journalist and photographer who has worked extensively in the Middle East – on the ground in Syria, Egypt, Iraq and Palestine, while also covering the conflict in Yemen since 2015.