Every year, millions of Muslims mark International Quds to underscore the plight of Palestinians as a manifestation of the Palestinian cause, heeding a call by the late founder of the Islamic Republic, Imam Khomeini (RA), who designated the last Friday of every Ramadan as the International Quds Day. Quds Day is a unique form of a wide-aware campaign against the Israeli occupation of Palestine.

Given the importance of commemorating the Palestinian cause as a major issue of the Islamic nation and following the cancellation of International Quds Day rallies due to restrictions caused by the coronavirus, Leader of the Islamic Revolution Ayatollah Seyyed Ali Khamenei delivered a live speech this year on the occasion of International Quds Day.

His speech has been broadcasted live on domestic and international radio stations and television networks.

In his speech the Leader considered the dawn of the Islamic Revolution in Iran and the subsequent emergence of the Resistance Front to be factors that have impeded the “Zionist virus.”

He stressed the fact that the Zionist regime, the worst human evil, will be uprooted from the region despite being supported by the United States and its minions, in the not-too-distant future

Most of the Arab media, including Alahed, Almasirah, Alsumaria, Alarabiya, and Almanar covered the speech of Iranian Leader.

“His Eminence urged the confrontation of the absenteeism of the Palestinian issue, which is woven by the agents of political and cultural enemies of the Islamic countries,” wrote Almanar.

Read also:
Syria Summit Kicks Off In Russia With Some Anti-Saudi Trolling

Alarabiya, Saudi rulers’ mouthpiece secretly normalizing their ties with Tel Aviv, also reflected his speech, writing, “Iran says the day is an occasion to express support for the Palestinians, and Iran’s leaders frequently use the occasion to present themselves as anti-Israel,” adding, “Khamenei used his speech to reiterate his call for Israel to be destroyed and criticized US support for the country.”

Referring to Leader’s speech, Reuters in this regard reported, “Iran’s Supreme Leader Ayatollah Ali Khamenei called on Palestinians on Friday to continue their uprising against Israel, suggesting the Israeli government was a “tumor” that should be confronted until Palestinians were liberated.”

“Khamenei and other senior Iranian officials have called repeatedly over the years for an end to the Jewish state, including through a referendum in the region, where Palestinians are in the majority,” wrote US News. 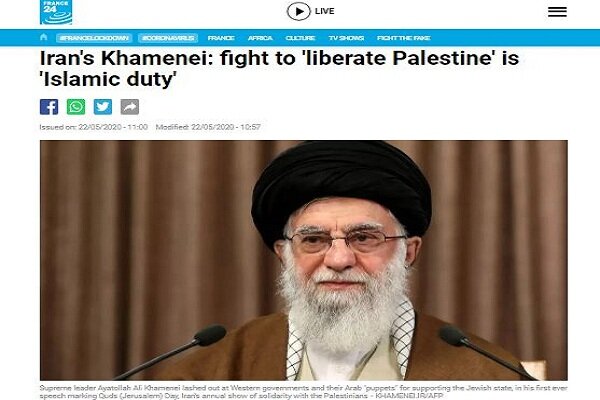 France 24 also covered the speech of Ayatollah Khamenei, writing, “Khamenei was speaking at the event for the first time in more than 30 years as the supreme leader, although he has repeatedly referred to the Palestinian cause as “the main problem of the Muslim world”.”

“Iran’s supreme leader said it was an “Islamic duty” to fight for the “liberation of Palestine” in a landmark speech Friday amid rising tensions with regional arch-enemy Israel,” it added.

Swissinfo in this regard wrote, “Iran’s Khamenei denounces Israel as “tumor” that will be eliminated.”

“Opposition to Israel is a touchstone of belief for Shi’ite-led Iran, which backs Palestinian and Lebanese Islamic militant groups opposed to peace with the Jewish state, which Tehran refuses to recognize,” The New York Times said.

It also quoted some parts of Iranian Leader’s remarks on Friday, writing, “Today, the world is counting one by one every victim of the coronavirus across the globe, but nobody has asked who is responsible for the hundreds of thousands of martyrdoms, imprisonments and disappearances in Palestine and in countries where the US and Europe have waged wars?” 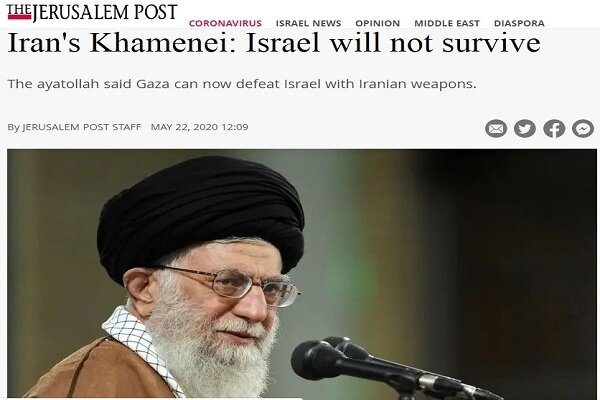 The two Zionist media, Times of Israel and the Jerusalem Post also covered the speech of Ayatollah Khamenei on the occasion of International Quds Day.

Referring to Iranian leader speech that he said, “One day we came to the conclusion that the Palestinian fighters had piety, pride, and courage, and their only problem was that they had no weapons in their hands. With divine guidance and assistance, we planned and the result was that the balance of power was transformed in Palestine, and today Gaza can stand against the aggression of the Zionist enemy and defeat it,” The Jerusalem Post wrote, “The ayatollah said Gaza can now defeat Israel with Iranian weapons.”

“Iran’s Supreme Leader Ayatollah Ali Khamenei said Israel will not survive and will “be eliminated” on Twitter Friday morning,” it added.

In this regard, Times of Israel wrote, “Marking Iran’s anti-Israel Quds Day on Friday, Iran’s Supreme Leader Ayatollah Ali Khamenei said Israel’s establishment was an unequaled “crime against humanity,” repeated his characterization of the Jewish state as “a cancerous tumor” and said it was the creation of “Westerners and Jewish corporation owners.”

“And he lamented that while Arab nations initially resisted the Jewish state, the majority of governments “gradually succumbed… they forgot their human, Islamic and political responsibilities and their Arab pride”, it added.

Many other media outlets around the world also covered the Iranian leader’s remarks on the occasion of International Quds Day. These media reflected his speech by referring to his quote which he said the Israeli regime is as ‘tumor’ that will be eliminated.