They were invited to participate in the VIII Ethics in Action Workshop which was focused on analyzing the “Challenges of Sustainable Development to Do Justice for Indigenous Peoples,” organized by the Pontifical Academy of Sciences. Sustainable development seeks a holistic approach to well-being based on reducing poverty, increasing social inclusion and caring for the earth. An integral development concerns for full human flourishing in all dimensions of life. The challenges proposed by Ethics in Action are related to forms of violence and coercion (war, violent religious and ethnic extremism, gender violence, modern slavery, drug trafficking); environmental threats (climate change, destruction of species and habitat) and social exclusion (poverty, inequality, deprivation, gender discrimination, and marginalization of indigenous and minorities). Pope Francis’ encyclical, Laudato Si ‘, offers this attempt’s foundational text. 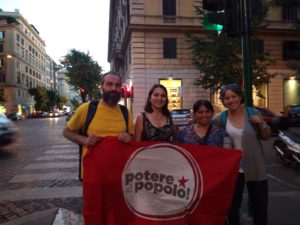 Also, Myriam and Teresa met with some “Potere al Popolo” (Power to People) members. Potere al Popolo is an italian political parties coalition, similar to Podemos in Spain. Its members describe PaP as an “anti-capitalist, communist, socialist, ecologist, feminist, secular, pacifist, libertarian, southern” left-wing organization. The meeting revolved around their stories of struggle and exclusion as indigenous in the Esteros del Iberá (one of the world’s largest freshwater reserves) and Patagonia (disputed territory, worldwide known for the death of activists like Santiago Maldonado and Rafael Nahuel). They also talked about the excluded people struggles since neoliberal economic policies’ restoration throughout the world, the IMF in Argentina and the current situation in Italy. The rise of “Potere al Popolo” as a new force in Italian politics and the peasant and indigenous struggles in CTEP, a particular confederation in Argentina

Whodunnit? – Facts Related to The Sabotage Attack On The Nord...