Labour’s pledge to boost spending may not win it the votes it wants. In this election, other things are more important

Why would anyone not vote Labour? If person A knocks on your door and offers you £1,000, no questions asked, and person B offers £100, why refuse A? The question has long puzzled experts. Labour’s Jeremy Corbyn has pledged a great deal more in public spending than the (relatively) parsimonious Tories. Yet the Tories are running at 11 points ahead in the polls and appear within reach of victory. They have come first in seven of the last 10 elections, and according to at least one poll now hold a majority over Labour even among working-class voters.

In the early days of mass democracy it was thought populist politicians would bankrupt nations by promising to borrow and splurge ever more of “other people’s money”. Then the opposite theory held sway, that as the poor got richer they would vote Conservative. By the 1960s, Mark Abrams and Richard Rose famously asked Must Labour Lose? The answer was yes, unless the party changed.

Under Harold Wilson and Tony Blair, Labour largely aped the Tories and won elections. It reassured the wavering centre of its un-radicalism. But the conservative undercurrent soon dragged voters back to the right, a tendency recently exacerbated by the titanic struggle over Brexit. It has left political analysts largely baffled. 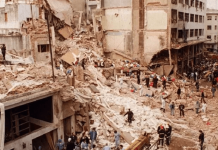