Introduction: I recently spoke to a relative of mine who, due to her constant and voluntary exposure to the legacy AngloZionist media, sincerely believed that the three Baltic states and Poland had undergone some kind of wonderful and quasi-miraculous economic and cultural renaissance thanks to their resolute break with the putatively horrible Soviet past and their total submission to the Empire since. Listening to her, I figured that this kind of delusion was probably common amongst those who still pay attention and even believe the official propaganda. So I asked Michael Hudson, whom I consider to be the best US economists and who studied the Baltics in great detail, to reply to a few very basic questions, which he very kindly did in spite of being very pressed on time. Once again, I want to sincerely thank him for his kind time, support and expertise. 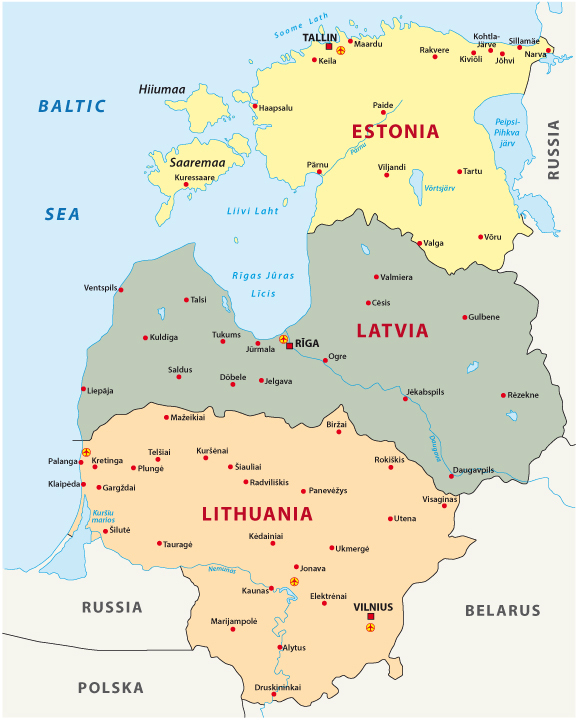 The Saker: The US propaganda often claims that the three Baltic states are a true success, just like Poland is also supposed to be. Does this notion have a factual basis? Initially it did appear that these states were experiencing growth, but was that not mostly/entirely due to EU/IMF/US subsidies? Looking specifically at the three Baltic states, and especially Latvia, these were the “showcase” Soviet republics, with a high standard of living (at least compared to the other Soviet republics) and a lot of high-tech industries (including defense contracts). Could you please outline for us what truly happened to these economies following independence? How did they “reform” their economies going from an ex-Soviet one to the modern “liberal” one?

Michael Hudson: This is a trick question, because it all depends on what you mean by “success.”

The post-Soviet neoliberalism has been a great success for kleptocrats at the top. They gave themselves the public domain, from key industries to prime real estate. But the Balts largely let their Soviet industries collapse, making no effort to salvage or reorganize them.

Much of the problem, of course, was that all the linkages to Soviet-era industry were torn apart as the Soviet Union was disbanded. With their supplier and final markets closed down from Russia to Central Asia, the Baltic economies had to start afresh – with a very right-wing tax policy and no government help whatsoever, as the government itself had become privatized in the hands of former officials and grabitizers.

Lithuania was marginally better in having some industrial policy. EU and NATO accession in 2004, along with easy credit, kicked off property bubbles in the Baltics, largely inflated by Swedish banks that made a bonanza off these countries that lacked their own banks or public credit creation. The resulting 2008 crashes were the largest in the world as a percent of GDP, with Latvia suffering the world’s biggest contraction.

The neoliberal western advisors who took control of these economies – as if this was the only alternative to Soviet bureaucracy – imposed crushing austerity programs to restore macroeconomic “stability” meaning security of their land and infrastructure grabs. This was applauded by Europe’s bankers, who thought the Balts had discovered a workable recipe allowing austerity governments to retain power in a seeming democracy. These policies would have collapsed governments anywhere else, but the ability to emigrate, plus ethnic divisions against Russian speakers, allowed these governments to survive.

It’s a historically specific situation, but Europe’s bankers promote it as a generalized model. George Soros’s INET and his associated front institutions have been leaders in subsidizing this financialization-cum-grabitization. The result has been a massive exodus of prime working age people from Lithuania and Latvia. (Estonians simply commute to Finland.) Meanwhile, their economies are buoyed by foreign bank lending, which sends profits back to home countries and can be reversed at any time.

Politically, the neoliberal revolution also has been a success for U.S. Cold Warriors, who sent over native Balts from Georgetown and other universities to impose “free market” doctrine – that is, a market “free” of domestic regulation against theft of the public domain, against monopolies, against land taxes and other income taxes. The Baltic states, like most of the rest of the former Soviet Union, became the Wild East.

What was left to the Baltic countries was land and real estate. Their forests are being cut down to sell wood abroad. I describe all this in my book Killing the Host.

The Saker: After independence, the Baltic states had tried to cut as many ties with Russia as possible. This included building (rather silly looking) fences, to forcing the Russians to develop their ports on the Baltic, to shutting down large (or selling to foreign interests which then shut them down) and profitable factories (including a large nuclear plant I believe), etc. What has been the impact of this policy of “economic de-Sovietization” on the local economies?

Michael Hudson: Dissolution of the Soviet Union meant that Baltic countries lost their traditional markets, and had to shift their focus to Western Europe and, to some extent, Asia.

Latvia and Estonia had been assigned computer and information technology, and they have found this to be much in demand. When I was in Japan, for instance, CEOs told me that they were looking to Latvia above all to outsource computer work.

Banking also was a surviving sector. Gregory Lautchansky, former vice-rector at the University of Riga had been a major player already in the 1980s for moving out Russian oil and KGB money. (His company, Nordex, was sold to Mark Rich.) Many banks continued to shepherd Russian flight capital via offshore banking centers into the United States, Britain and other countries. Cyprus of course was another big player in this.

The Saker: Russians are still considered “non-citizens” in the Baltic republics; what has been the economic impact of this policy, if any, of anti-Russian discrimination in the Baltic states?

Michael Hudson: Russian-speakers, who do not acquire citizenship (which requires passing local language and history tests), are blocked from political office and administrative work. While most Russian speakers below retirement age have now acquired that citizenship, the means by which citizenship must be acquired has caused divisions.

Early on in independence, many Russians were blocked from government, and they went into business, which was avoided by many native Balts during the Soviet era because it was not as remunerative as going into government and profiting from corruption. For instance, real estate was a burden to administer. Russian-speakers, especially Jewish ones, have wisely focused on real estate.

The largest political party is Harmony Center, whose members and leadership are mainly Russian-speaking. But the various neoliberal and nationalist parties have jointed to block its ability to influence law in Parliament.

Since Russian speakers are only able to “vote with their feet,” many have joined in the vast outflow of emigration, either back to Russia or to other EU countries. Moreover, the poor quality of social benefits has led to few children being born.

The Saker: I often hear that a huge number of locals (including non-Russians) have emigrated from the Baltic states. What has caused this and what has been the impact of this emigration for the Baltic states?

Michael Hudson: The Baltic states, especially Latvia, have lost about 30 percent of their population since the 1990s, especially those of working age. In Latvia, about 10 percent of the loss were Russians who exited shortly after independence. The other 20 percent have subsequently emigrated.

The European Commission forecasts that Latvia’s working-age population will decline by 1.6% annually for the next 20 years, while the birth rate remains as stagnant as it was in the late 1980s. The retired population (over age 65) will rise to half a million people by 2030, more than a quarter of today’s population, and perhaps about a third of what remains. This is not a domestic market that will attract foreign or local investment.

And in any case, the European Union has viewed the post-Soviet economies simply as markets for their own industrial and agricultural exports, not as economies to be built up by public subsidy as the European countries themselves, the U.S. and Chinee economies have done. The European motto is, “Give a man a fish, and he will be fed all day with your surplus fish and consumer goods – but give him a fishing rod and we will lose a customer.”

Readers who are interested might want to look at the following books and articles. I think the leading work has been done by Jeffrey Sommers and Charles Woolfson.

Read also:
A more dangerous world is probably coming after the US election!

The Saker: Finally, what do you believe is the most likely future for these states? Will the succeed in becoming a “tiny anti-Russia” on Russia’s doorstep? The Russians appear to have been very successful in their import-substitution program, at least when trying to replace the Baltic states: does that mean that the economic ties between Russia and these states is now gone forever? Is it now too late, or are there still measures these countries could take to reverse the current trends?

Michael Hudson: Trump’s trade sanctions against Russia hurt the Baltic countries especially. One of their strong sectors was agriculture. Lithuania, for instance, was known for its cheese, even in Latvia. The sanctions led Russian dairy farming to develop their own cheese-making, and agriculture has become one of Russia’s strongest performing sectors.

This is a market that looks like it will be permanently lost to the Baltic states. In effect, Trump is helping Russia follow precisely the policy that made American agriculture rich: agricultural isolation has forced domestic replacement for hitherto foreign food. I expect that this will lead to consumer goods and other products as well.

The Saker: thank you for your time and replies!

How the QAnon Cult Stormed the Capitol

Moscow Sees US Support for Unauthorised Rallies in Russia as Direct...

Turkey threatens Greece with war if it extends its territorial waters...