The British seizure of the Iranian tanker off Gibraltar was illegal. There is no doubt of that whatsoever. The Iranian response to the seizure of its tanker in the Strait of Gibraltar, by the seizure of a British Tanker in the Strait of Hormuz, was also illegal, though more understandable as a reaction. The implications for the global economy of the collapse of the crucial international law on passage through straits would be devastating.

It may seem improbable that the UK and or France would ever seek to close the Dover Strait, but in the current crazed climate it is no longer quite impossible to imagine the UK seeking to mess up access to Rotterdam and Hamburg. It is still easier to imagine them seeking to close the Dover Strait against the Russian Navy. Yet the essential freedom of navigation through the Kerch strait, respected by Russia which controls it, is necessary to the survival of Ukraine as a country. For Turkey to close the Bosphorus would be catastrophic and is a historically recurring possibility. Malaysia and Indonesia would cause severe dislocation to Australia and China by disrupting the strait of Malacca and the Suharto government certainly viewed that as an advantage from which it should have the right to seek to benefit, and was a continued nuisance in UN Law of the Sea discussions. These are just a few examples. The US Navy frequently sails through the Taiwan Strait to assert the right of passage though straits.

Keeping the Strait of Hormuz open is perhaps the most crucial of all to the world economy, but I hope that the above examples are sufficient to convince you that the right of passage through straits, irrespective of territorial waters, is an absolutely essential pillar of international maritime law and international order. The Strait of Gibraltar is vital and Britain has absolutely no right to close it to Iran or Syria. If the obligation on coastal states to keep maritime straits open were lost, it would lead to economic dislocation and even armed conflict worldwide.

Part III of the UN Convention on the Law of the Sea relates entirely to passage through straits. 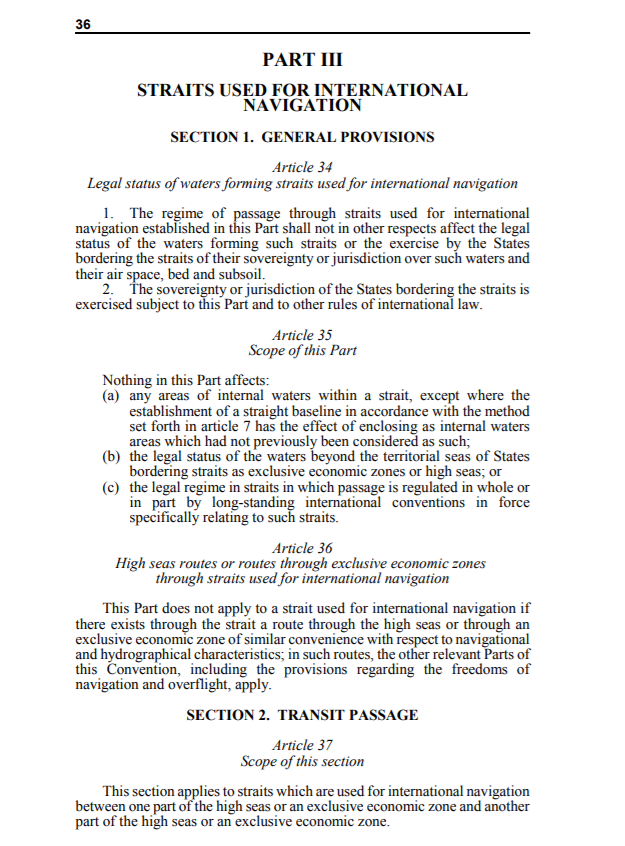 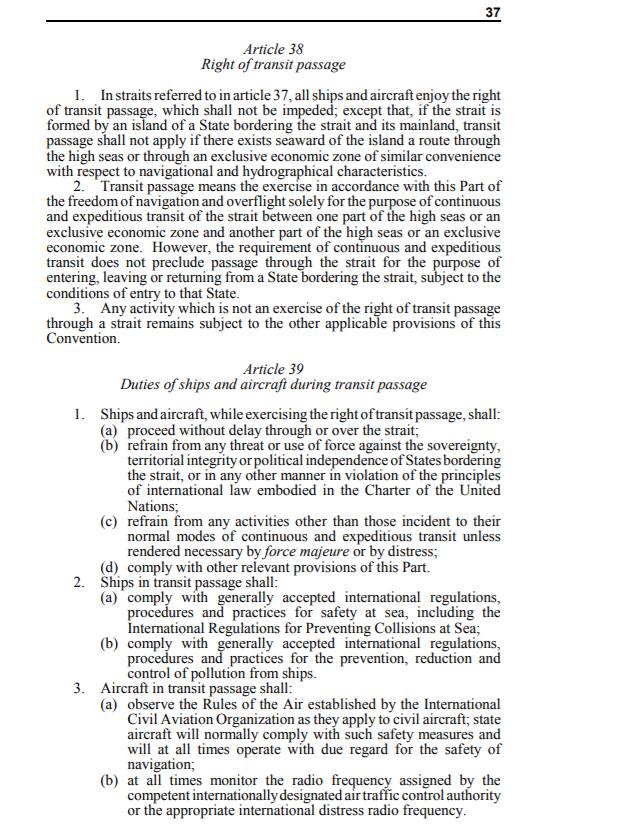 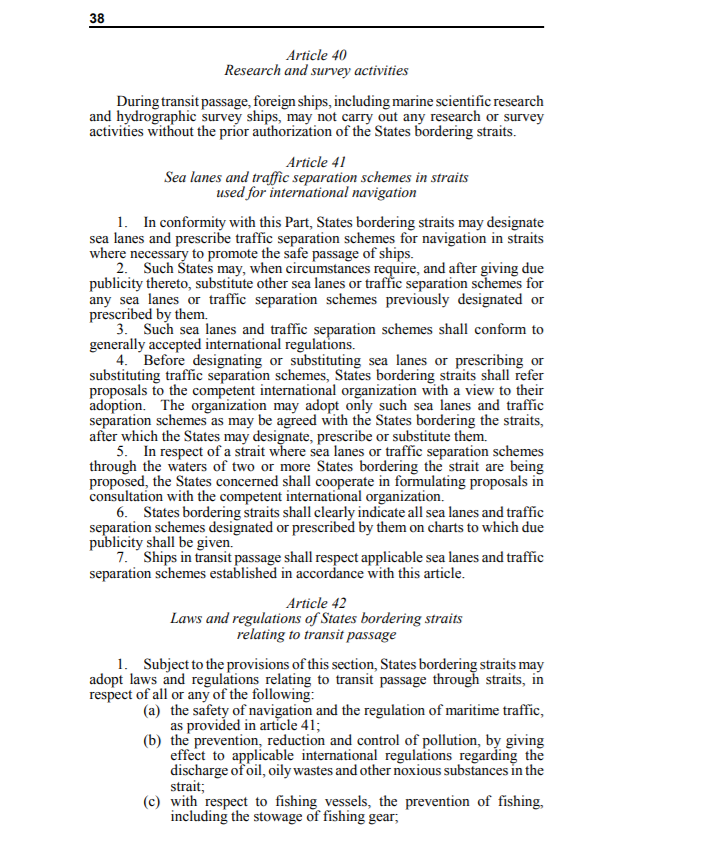 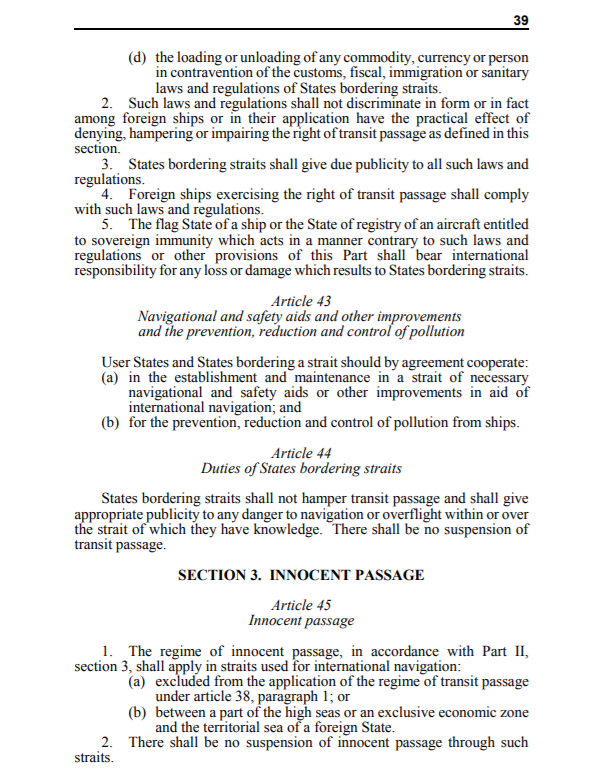 Jeremy Hunt’s statement to parliament that the Iranian tanker had “freely navigated into UK territorial waters” was irrelevant in law and he must have known that. The whole point of passage through straits is that it is by definition through territorial waters, but the coastal state is not permitted to interfere with navigation.

It is therefore irrelevant whether, as claimed by the government of the UK and their puppets in Gibraltar, the tanker was intending to breach EU sanctions by delivering oil to Syria. There is a very strong argument that the EU sanctions are being wilfully misinterpreted by the UK, but ultimately that makes no difference.

There are two circumstances in which the UK could intercept the Iranian ship in the Strait of Gibraltar legally. One would be in pursuance of a resolution by the UN Security Council under Chapter VII of the UN Charter. There is no such resolution in force. The second would be in the case of a war between the UK and Iran or Syria. No such state of war exists (and even then naval blockade must be limited by the humanitarian measures of the San Remo Convention).

What we are seeing from the UK is old fashioned Imperialism. The notion that Imperial powers can do what they want, and enforce their “sanctions” against Iran, Syria and Venezuela in defiance of international law, because they, the West, are a superior order of human being.

The hypocrisy of arresting the Iranian ship and then threatening war when Iran commits precisely the same illegal act in retaliation is absolutely sickening.

Finally, there will no doubt be the usual paid government trolls on social media linking to this article with claims that I am mad, a “conspiracy theorist”, alcoholic or pervert. It is therefore worth pointing out the following.

I was for three years the Head of the Maritime Section of the Foreign and Commonwealth Office. I was Alternate Head of the UK Delegation to the UN Preparatory Commission on the UN Convention on the Law of the Sea. I both negotiated, and drafted parts of, the Protocol that enabled the Convention to come into force. I was the Head of the FCO Section of the Embargo Surveillance Centre and responsible for giving real time political and legal clearance, 24 hours a day, for naval boarding operations in the Gulf to enforce a UN mandated embargo. There are very few people alive who combine both my practical experience and theoretical knowledge of precisely the subject here discussed.

Read also:
No to the new Crime! Mikis Theodorakis on Cyprus, Russia and the upcoming War against Iran