The serial numbers found on debris of the Buk missile which downed Malaysian Airlines Flight MH17 over eastern Ukraine show it was produced in 1986, the Russian military said. The projectile was owned by Ukraine, they added.

There are two serial numbers found on fragments of the missile, which shot down the passenger airliner in June 2014 according to an international team of investigators led by the Netherlands. The numbers were marked on the engine and the nozzle of the missile.

The Russian military on Monday said they had traced them to a missile which had the producer serial number 8868720.

Speaking to journalists, Gen. Nikolay Parshin showed a document trail of the Buk missile. According to the documents, some of which have been declassified for the presentation, it was produced at a military plant in Dolgoprudny in the Moscow region in 1986. 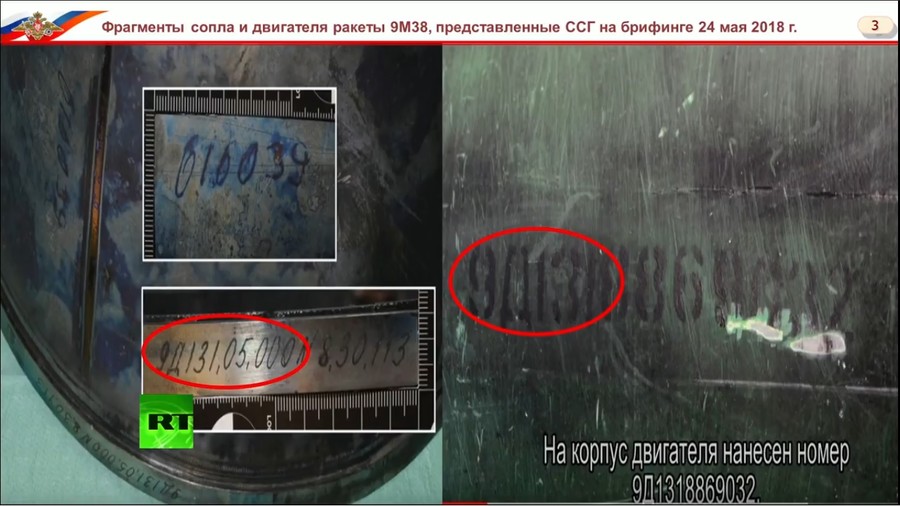 Serial number on engine and nozzle of the missile.

The missile was shipped from the plant on December 29, 1986 and delivered to military unit 20152 located in what is now Ukraine. It is now called 223rd anti-aircraft defense regiment of the Ukrainian armed forces, the report said. The unit took part in Kiev’s crackdown on rebels in eastern Ukraine in June 2014, the general said.

The evidence disproves the accusations by Ukraine and some other parties, which claim that a missile fired by a launcher, secretly delivered from Russia, was responsible for the downing of MH17, the Ministry of Defense report said. All the materials have been sent to the Dutch investigators, the Russian military added. 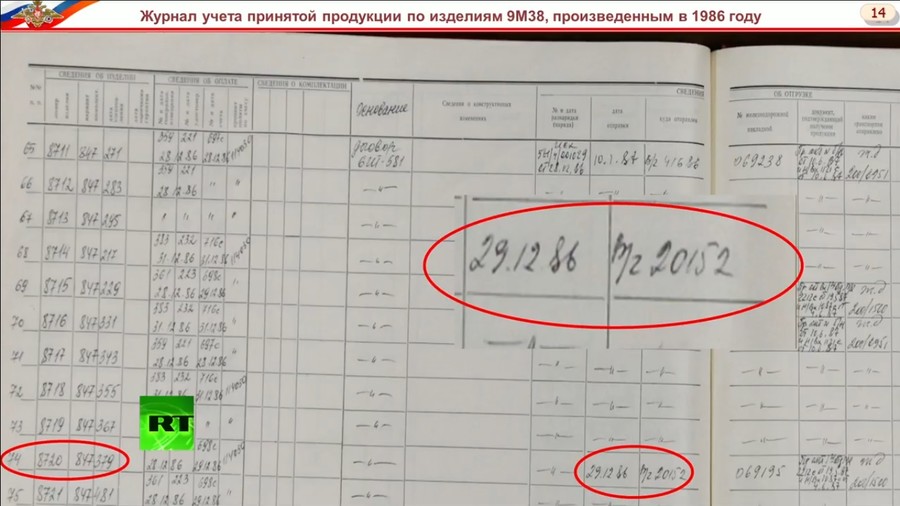 The Russian military also challenges video footage used by the UK-based group Bellingcat, which calls itself a citizen journalism organization, to back its allegations about the delivery of the Buk launcher from Russia. The Defense Ministry showed a video clip with some of the footage, highlighting inconsistencies, which it said proved that the footage had been manipulated to place images of the launcher into background which were not in the original.

The Bellingcat investigation was featured in the latest update by Dutch prosecutors involved in the MH17 investigation, prompting them to directly accuse Russia of providing the launcher and the missile. The Russian military said it decided after this to study the purported trail of photo and video evidence showing the path of the launcher in detail. The Russian video showed an example of how an Abrams tank can be shown to be carried by a trailer in the streets of Ukraine in the same way. 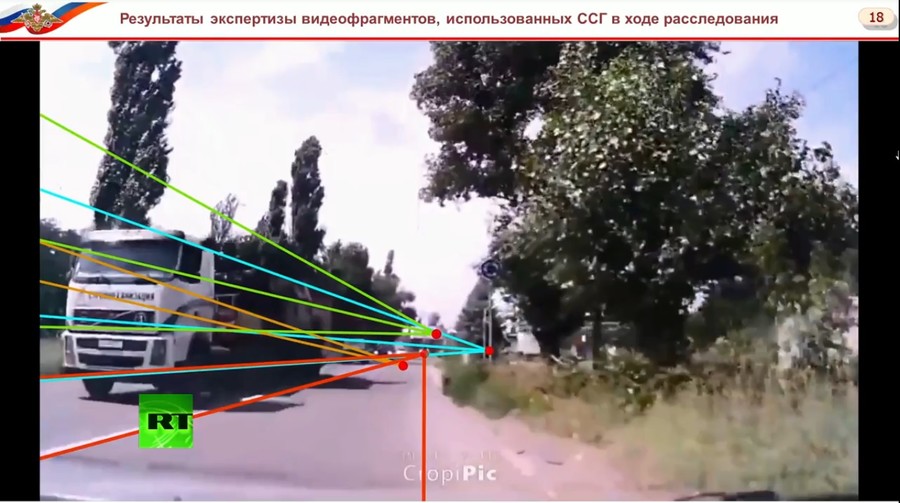 The third part of the presentation was what the Russian officials called a record of intercepted communications of Ukrainian officials discussing, in 2016, the risk of flying through restricted airspace over Ukraine. Among a barrage of complaints one phrase says unless the restrictions are respected “we’ll f***ing f**k up another Malaysian Boeing”.

The Russian military say the complaints came from Col. Ruslan Grinchak, who serves in a brigade responsible for radar control in Ukrainian airspace. His unit tracked the MH17 flight in 2014, so he may have information which is not publicly available about the disaster, and his outburst may have been factual rather than hyperbolic, they suggested. 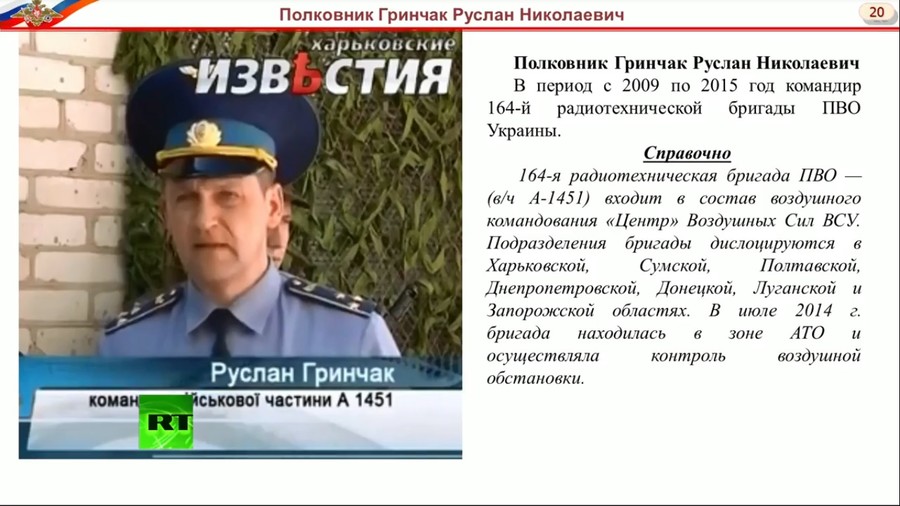 Information on a Col. Ruslan Grinchak shown by the Russian military.

Gen. Igor Konashenkov, who hosted the briefing, said that Ukraine failed to provide radar data from its stations to the Dutch investigators. He also suggested that archive documents from the Ukrainian unit, which received the Buk missile back in 1986, would be of use to the probe, unless Kiev claims that they are no longer available. He stressed rules are in place which mean that such documents should still be stored in Ukraine.

The Russian military said they had no evidence to disprove a scenario, involving the Ukrainian rebels capturing the missile from the Ukrainian army, but pointed out that Ukrainian officials publicly denied anything like this had ever happened.

Malaysian Airlines flight MH17 was shot down over eastern Ukraine on July 17, 2014, falling in the rebel-held part of the country. The crash claimed the lives of 283 passengers and 15 crew members, most of them Dutch nationals. Russia was blamed by Western media in the first days after the tragedy, even before any evidence had been collected on the ground.

The Joint Investigation Team, which is lead by the Netherlands, includes Ukraine, but not Russia. Moscow believes that the investigation is biased, failing to obtain all necessary evidence from Ukraine and relying on questionable sources while ignoring evidence provided by Russia, which doesn’t fit the theory favored by Kiev. For instance, Moscow said a theory was never tested that the airliner could have been downed by a fighter jet spotted by Russian radar stations near flight MH17. The theory was later proven false by the discovery of debris from the Buk rocket.

Figaro and the French Revolution

Blinken Claims Iran Is Not Serious About Reviving the Nuclear Deal