The good news from Germany is very limited and parochial; the bad news downright alarming. Alarm rises from increasing evidence that – how to say this – Germany has “kicked its World War II syndrome once and for all”, to borrow from the exultant words of Gulf War-1-victorious President George H. W. Bush 40 years ago.

After destroying a second-rate Iraqi army Bush bragged, “By God, we’ve kicked the Vietnam syndrome once and for all.” He was referring to the perception in some quarters that, after the disaster of Vietnam, the U.S. was being too shy about using military force.

Have we come to the point where the Germans have shaken off their earlier “shyness” after the disaster of WWII?  This gives me goose pimples. Yes, I’m old enough to have lived through the entire war, but – unlike Russia – my country had two great oceans to help defend it. I can only imagine the size of today’s goose pimples on Russians – not only those who lived through the war, but also those who have been given personal accounts of it from fathers, mothers, grandfathers and grandmothers.

The small piece of recent good news involves a thoughtful article by a serious German journalist. The day after VIPS published its (May 1) Memorandum for The President, warning him not to ignore Russian warnings about the possible use of nuclear weapons, Germany’s most respected progressive website, NachDenkSeiten, published a full translation, giving it front-page prominence.

Of more importance, NDS’s editor-in chief, Albrecht Mueller, saw fit to attach (1) a preface; (2) a detailed comparison of what VIPs wrote with what German media are saying; and (3) his conclusions (Fazit), based largely on Germany’s increasingly hawkish Ukraine-related actions – some of them unprecedented since WWII – which are stoked and widely applauded by the mainstream media there. I found Mueller’s presentation, especially his description of front-page coverage in his newspaper, “Die Rheinpfalz am Sonntag”, somewhat shocking.

Albrecht Mueller was chief of planning for Willy Brandt and Helmut Schmidt and also a member of the Bundestag from 1987 to 1994 (and the author of bestsellers). Not surprisingly, he is distraught at what has happened to the SPD (Social Democratic Party) and to the media – and the dangers posed to peace in Europe. This is the bad news, just as the 77th anniversary of VE Day is about to be celebrated in Moscow and elsewhere.

Has it taken Germany only two generations to forget the horrors of the war inflicted by the Nazis under Hitler? The Russians, having lost 26 million during that war, have not forgotten This is a combustible mixture.

I found Albrecht Mueller’s observations about the captive, one-sided press so much on point that I translated them into English, including the detailed critique he gives to his regional newspaper on May 1. It follows, together with his preface and conclusions, below:

Read also:
The Revolt of the South, or the imperative to build a new Europe!

Veteran US intelligence officers, in a Memo to President Biden, warn him not to dismiss as an empty threat Russian President Putin’s references to nuclear weapons. The recent Memo from Veteran Intelligence Professionals for Sanity (VIPs) was translated by Thilo Haase. Ray McGovern notes that this is probably the most important VIPs Memo since the one sent to President Bush on Feb. 5, 2003 exposing Colin Powell’s lies earlier that day at the UN.

Bearing in mind the warning published by VIPs on May 1 about the abominable risks of the ongoing war [in Ukraine], I call your attention to the front page my regional newspaper [Die RheinPfalz am Sonntag] on May 1. That page is peppered with attempts to play down the dangers of war and to offer encouraging reassurances for providing weapons for the war. That is typical for many products of our major media. And so I make concrete reference to that and compare it with the warning from the veteran intelligence officers.

[At this point NachDenkSeiten publishes a German translation of the full text of the VIPs Memo and adds a Conclusion critique by editor Mueller.]

From “Nie Wieder Krieg” to “War? No Problem!”

After the end of the horrible Second World War there was at least a large consensus: War Never Again! (Nie Wieder Krieg!) This avowal came also from people who were connected with the Nazis and/or with the German military.  The shock of the many killed, the destroyed cities, and the millions of refugees at least had the result that the lust for war and for the military shrunk to almost zero.  Nie Wieder Krieg was the common watchword. By the way, even in 1980 there was clearly a majority for this attitude. And so the SPD on May 11 won the Landtag election in Nordrhein Westphalia with an absolute majority precisely with this avowal: Nie Wieder Krieg.

Today that is pretty much forgotten. We have become accustomed to this reality that the Bundeswehr has been transformed from an army for defense into an instrument of military intervention abroad, fumbling around outside the NATO area. Now we talk about and admit to delivering weapons, training Ukrainian soldiers by the USA on German soil, ammunition for tanks, etc.

A Prime Example of this war-friendly public opinion formation is the front page of my regional newspaper yesterday [Die RheinPfalz am Sonntag, May 1]

The only items that had nothing to do with the war and our participation in it were the small football report on the upper left, the equally tiny weather report on the lower left, and a small ad for eyeglasses on the lower right of the page. 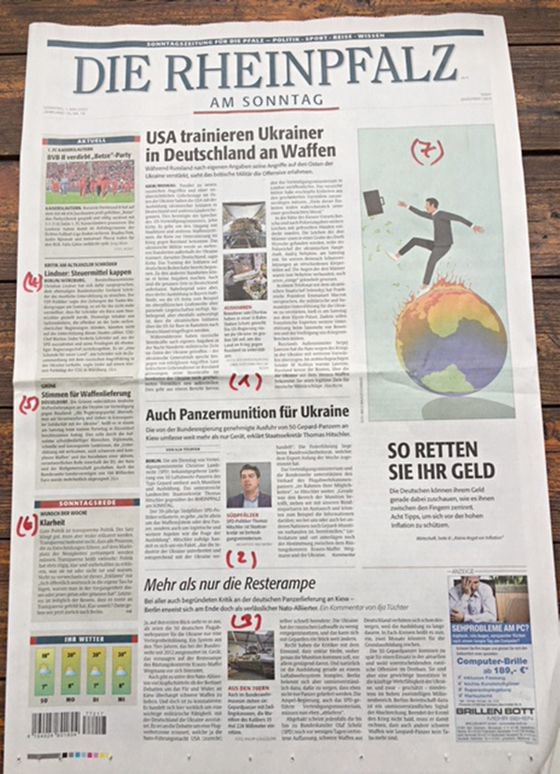 In all the other articles (from #1 to #6 [as numbered in the photo above]) Germany’s participation in the war is treated sympathetically. A large notice on the right side (#7) points to an inside article with eight suggestions as to how to protect from high inflation. No mention is made of the possibility that this inflation could have something to do with the increase in weapons expenditures and the universally endorsed sanctions.

One Article After Another

The lead story (#1) reports that the USA is giving Ukrainian soldiers weapons-training in Germany – presumably in Grafenwoehr and Ramstein. Absent is any critical commentary regarding this abuse of German soil by the US military, even though this marks an additional step in the participation of our country in this war.

In the second largest article (#2) it is reported that Germany is providing not only 50 Gepard tanks, but also the ammunition for those tanks. Die Rheinpfalz am Sonntag report is based on statements by the Parliamentary State Secretary for Defense, Thomas Hitschler (SPD).

He announces that what’s happening is the provision “not only of weapons systems and the tank itself, but also the logistical and additional aspects like the issue of the training”. (By the way: Thomas Hitschler, now SPD Bundestag member (Suedpfalz) now occupies the seat I once had. Times are changing.)

Referring to the Hitschler’s statements, Article #3 states that, by providing 50 German anti-aircraft tanks, Germany is equipping Ukraine with an important military capability; it goes on to say: “Amid all the criticism, including justified criticism, of providing German tanks to Kyiv, Berlin now shows that, in the end, it is a reliable NATO ally.” Here we see a familiar two-step manipulation. The commentator refers to the criticism of Germany and of Scholz for their earlier hesitancy to provide weapons and then turns that into an implied message that providing weapons is sensible and good [because, of course, being “a reliable NATO ally” is, ipso facto, sensible and good].

Article #4 reports that the German Finance Minister and Chairman of the FDP has called for a halt to state support for former Chancellor Schroeder. “Former holders of the highest offices, who apparently stand on the side of criminal governments, should not be able to count on support from this country.” [Emphasis added, RM]

Read also:
NATO and CIA escalate their war against Russia from Ukraine

Article #5 states that the Greens, at their party congress Saturday in Duesseldorf, decided that Ukraine should get “support with effective, including heavy and complex, weapons”, and that “the Bundeswehr special fund of 100 billion [euros; roughly equal to US dollars] was approved by a majority of the Greens there.”

In item #6 (the so-called “Sunday word, Wish of the Week”), our issue is also discussed, indirectly. In an apparent allusion to the reluctance of Bundeskanzler Scholz to provide weapons to Ukraine, the article conveys the impression that he has now obeyed the orders of the media and created the needed “clarity”.

What is being done here on a single page of a newspaper is an example of what many media in Germany are doing these days: They are playing down wars, they are promoting the idea that our participation in wars by supplying weapons and training Ukrainian soldiers is self-evident, nothing special, just a matter of course. Clearly, we are to be accustomed to wars.

This is dangerous because it systematically grinds down resistance to wars. The latest polls showing great admiration for German Foreign Minister Baerbock and her party colleague and Economics Minister Habeck indicate how popular the advocacy of confrontation has become. We have come a long way from the erstwhile consensus on “Never Again War.” Again, this is a dangerous development. Today’s politicians no longer have to take into account a popular opinion favoring peace.

This originally appeared at RayMcGovern.com.

Ray McGovern works with Tell the Word, a publishing arm of the ecumenical Church of the Saviour in inner-city Washington. His 27-year career as a CIA analyst includes serving as Chief of the Soviet Foreign Policy Branch and preparer/briefer of the President’s Daily Brief. He is co-founder of Veteran Intelligence Professionals for Sanity (VIPS).