The centre-left failed in getting rid of the so-called blue-blue government at the parliamentary elections in Norway on 11 September. The Labour Party was the main loser, while small parties on the centre-left advanced slightly. However, the parliamentary basis of the right-wing government has started to unravel. A deeper political crisis may be looming in the background, while social contradictions are on the raise. Social Democracy followed the general European downward tendency (except Britain).

First, some basic facts on the Norwegian electoral system. There are 169 members of parliament, who are elected through proportional representation. The 19 counties serve as the electoral constituencies. There is a threshold of 4 percent to qualify for the proportional distribution of representatives, although it is possible to win direct representation from the counties also if the national gain of votes is below the threshold. Two political parties won representation in that way.

In the previous four-year parliamentary period, Norway was governed by a minority government formed by the Conservative Party and the so-called Progress Party (a right-wing populist party). Therefor the name blue-blue government. It was supported by two other parties – the Christian Democratic Party and the so-called Liberal Party (which in reality is neo-liberal, but with a touch of green). This support was established through a formal agreement, but to secure a parliamentary majority for the government, it was sufficient with support from only one of those two parties.

Norway has seen an increasing political fragmentation over the last years. After the current elections, there are 9 political parties in Parliament. The four on the right are mentioned above, while the centre-left opposition includes the Labour Party, the Centre Party, the Socialist Left Party, the Green Party and the Red Party. As in many other countries, however, the entire political spectre has moved to the right during the neo-liberal offensive from around 1980.

For the blue-blue government, two important things changed with the last election. The Christian Democratic Party says that it is no longer willing to sign a contract of support to a government in which the right-wing populist party takes part; and the government is dependent on both the two former supportive parties to achieve majority in Parliament. In other words, the Government’s political basis is much weaker than in the previous period, something which opens the possibility of a break-down of the blue-blue government. Since Norway does not have the possibility to call an election in a mid-parliamentary period, this can lead to a lot of political turbulence or an open political crisis.

Many people expected a centre-left victory at this election, since the blue-blue government had carried out many unpopular policies. The discontent was particularly strong in the trade union movement. However, the Labour Party’s election campaign proved to be quite disastrous under its new leader, Jonas Gahr Støre. One of the big “mistakes” was a flirt with the so-called political centre (centre right), that is with the two political parties which had supported the blue-blue government and by that had also supported attacks on the labour law and other economic and social gains for the working class. Further, the Labour Party was not even able to take a clear stand against the on-going and very unpopular commercialisation of core services in the Norwegian welfare state. Neither did the party come up with a credible policy against the undermining of labour market regulations, which to a high degree is promoted by the increasingly authoritarian, neo-liberal European Union. This is a policy which in Norway is being implemented through the European Economic Area (EEA), an agreement which is strongly supported by the Labour Party.

The right-wing populist party, on the other hand, was successful in setting the agenda for much of the election campaign, first and foremost by playing the anti-immigration card and by focussing on identity policies. The Labour Party was unable to respond to this with the only measures which can really confront such right-wing policies, namely a clear class policy. This did not necessarily happen because the party’s leadership is unwilling to do so, but simply because class politics are strongly in deficit in today’s social democracy – deeply rooted as it still is in a social partnership ideology.

While social democracy is on the verge of breaking down, and even being eradicated, in big parts of Europe today (Greece, Iceland, Ireland, the Netherlands, France), much suggests that also the Norwegian, actually the Nordic, social democracy, despite its fame as the creator of the Nordic welfare model, is now following the downward course of their European sister parties, although more gradually. Power relations does not seem to be part of the actual social democratic narrative – their ‘raison de vivre’ is obviously to administer capitalism within the limits given in the at any time existing power relations – not to shift the balance of power. Thus, the right-wing political offensive is not really being confronted by social democracy.

The golden age of social democracy was based on a class compromise and a balance of power which made it possible to move forward socially within the framework of a regulated capitalism (i.e. the welfare state). The material basis for such policies is now coming to an end with the deep crisis and stagnation of capitalism, and the subsequent neo-liberal offensive. The social democratic attempt to re-establish the class compromise, with its successful tripartite cooperation and social dialogue, even without class mobilisation and confrontations, is an illusionary project in the current political conjuncture.

Maybe the Norwegian election is just another sign that the era of social democracy is now coming to an end.  All those, all over the world, who has been looking at the Nordic Model as their final aim, may have to rethink and reassess their policies and strategies. But who on the left is it that can now provide us with a class policy with perspective? 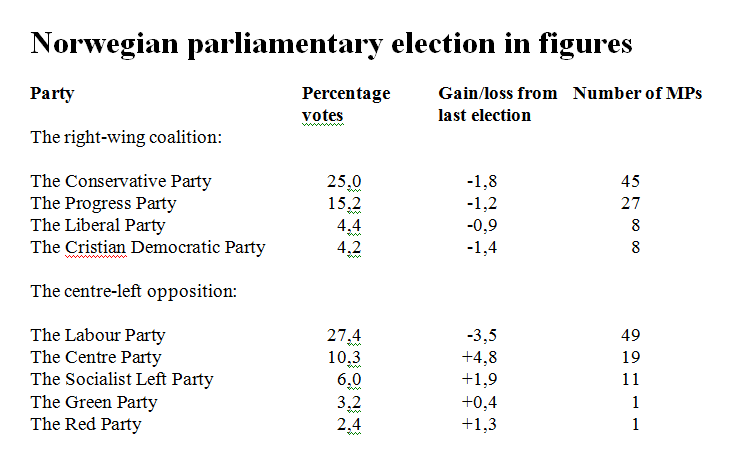