As congressional Democrats press Joe Biden to reject investment banking executive Rahm Emanuel’s bid to get himself appointed to the Cabinet, new polling data obtained by The Daily Poster show the vast majority of Americans want senators to vote down presidential nominees who are too closely tied to corporate interests. 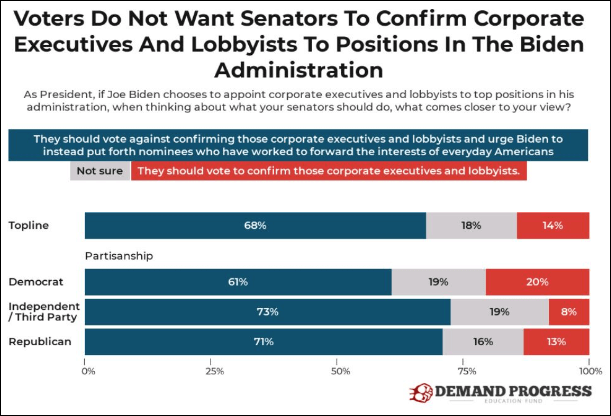 The polling comes only a few years after Elizabeth Warren was lauded for staging a high-profile campaign to block President Barack Obama’s attempt to install a Wall Street banker in a top regulatory position.

Earlier this week, U.S. Sen. Bernie Sanders said that it would be “enormously insulting if Biden put together a ‘team of rivals’ — and there’s some discussion that that’s what he intends to do — which might include Republicans and conservative Democrats — but which ignored the progressive community. I think that would be very, very unfortunate.”

A Battle Over Nominees Is Already Raging

Demand Progress and the Revolving Door Project have been pressing a prospective Biden administration to break with the Clinton and Obama administration tradition of installing corporate allies in key governmental positions. The groups are poll testing potential nominees, with descriptions of their backgrounds, to gauge potential public support and opposition for a Biden cabinet.

The groups’ work received a boost when incoming U.S. Rep. Mondaire Jones last week launched a petition calling on Biden to reject Emanuel, who has been floated for U.S. Transportation Secretary or U.S. Trade Representative.

Emanuel left the Chicago mayoralty in disgrace after his administration suppressed video of the police murder of a teenager. Since then, he has become a TV talking head and a senior advisor at an investment banking firm that advises big corporations on mega-mergers, acquisitions and restructuring plans. Reps. Alexandria Ocasio-Cortez and Jamaal Bowman have echoed Jones’ demand for Biden to reject Emanuel.

Regardless of what happens with Emanuel, Biden has already named two Cabinet nominees tied to corporate interests, and he is reportedly considering others.

On Monday, Biden announced that he has chosen Tony Blinken to serve as Secretary of State. Blinken founded WestExec Advisors, a secretive business consultancy that has worked with defense contractors. Avril Haines, a former WestExec principal, will serve as Biden’s Director of National Intelligence.

Biden is also reportedly considering nominating WestExec co-founder Michele Flournoy to serve as Secretary of Defense, as well as two corporate lawyers — Sally Yates and Karen Dunn — to serve as Attorney General and the head of the Justice Department’s antitrust division, respectively.

Biden did appease some progressives with the nomination of former Federal Reserve Chairman Janet Yellen to serve as his Treasury Secretary. Yellen would be a rare Treasury Secretary who didn’t come straight from Wall Street, and she has supported deficit spending and tougher banking regulations, though she has also echoed some of the austerity rhetoric of groups aiming to cut Social Security and Medicare.

The Demand Progress poll found that 58 percent of respondents supported the nomination of Yellen, based on a description of her as an official who wants “to extend unemployment benefits and help state and local governments avoid cuts to services.”

Past Precedent For Progressive Opposition

There is precedent for Democratic senators to block nominees from presidents of their own party — that happened at least three times in Obama’s second term.

In 2013, when Obama was reportedly considering nominating Wall Street ally Larry Summers to head the Federal Reserve, Democratic senators short-circuited the nomination before it ever happened.

In 2014, Obama pushed to install banker Antonio Weiss into a top job at the Treasury Department, but the nomination was torpedoed by Warren, who used the confirmation fight as a way to spotlight the close ties between the White House and Wall Street.

The next year, Warren opposed Obama’s attempt to appoint corporate attorney Keir Gumbs to a Democratic seat on the Securities and Exchange Commission.

In a closely divided Senate, opposition to Biden nominees from even a handful of Democratic lawmakers could mean the difference between confirmation and rejection. That potentially gives progressive lawmakers more power in the Cabinet selection process.